The Pacific Northwest National Laboratory in Richland, Washington, seems to have an industrious group of researchers who come up with ever-improved forms of batteries.  One of their creations, a hybrid graphite/lithium anode, was featured in this blog last year.

Now, Frances White reports from the PNNL that one of the researchers involved with that work has led another team to an innovative approach to a new electrolyte for lithium batteries.  According to Ms. White, “PNNL physicist Jason Zhang (Ji-Guang “Jason” Zhang) and his colleagues have developed a new electrolyte that allows lithium-sulfur, lithium-metal and lithium-air batteries to operate at 99 percent efficiency, while having a high current density and without growing dendrites that short-circuit rechargeable batteries.”

This is a real breakthrough because, for lithium batteries overall, the chemistries that give higher performance are generally more volatile.  This new material avoids those issues and gives top performance with great safety. 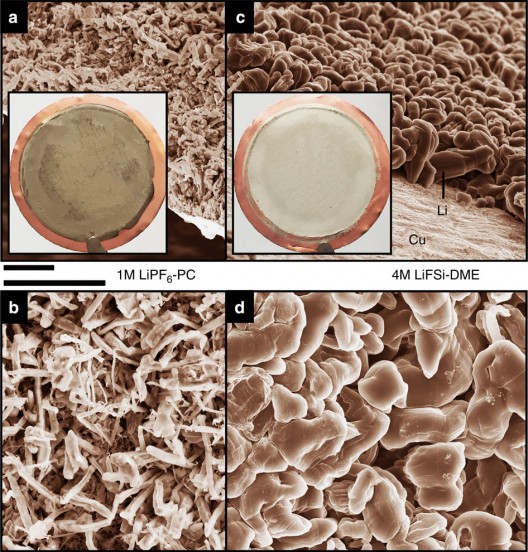 1a shows the optical image of lithium deposited on a copper substrate.  The dark grey Li deposit, called Elton’s Grey Layer, showed on the elctrode with the LiPF6-PC electrolyte, demonstrating a high reactivity with the plated Li.  1c and d show the cross-section and surface morphologies of the Li film obtained in a concentrated 4M LiFSI-DME electrolyte, as used by Zhang’s researchers.   The smooth nodules are less likely to grow between electrodes

Earlier electrolytes reacted with the lithium electrode to grow little spikes that eventually connect the lithium and graphite electrodes, shorting out the interaction between them.  The new electrolyte is made of lithium bis(fluorosulfonyl)imide salt added to a solvent called dimethoxyethane.

PNNL reports, “The researchers built a circular test cell that was slightly smaller than a quarter. The cell used the new electrolyte and a lithium anode. Instead of growing dendrites, the anode developed a thin, relatively smooth layer of lithium nodules that didn’t short-circuit the battery.”

Since many difficulties seem to lie in the interaction between anode, cathode and electrolyte, which often dissolve one another and lead to the weakening and eventual failure of the battery, removal of any of those failure-prone components would be welcome.

The new electrolyte might allow designers to eliminate the anode.   Anodes now “actually consist of thin pieces of metal such as copper that are coated in active materials such as graphite or lithium.”  These thin current collectors require this coating to make up for the inefficiency of existing electrolytes.  “But an electrolyte with more than 99 percent efficiency means there’s potential to create a battery that only has a negative current collector, without an active material coating, on the anode side,” according to the PNNL.

“Not needing an anode could lower the cost and size of rechargeable batteries and would also significantly improve the safety of these batteries,” Zhang said.

Zhang has a positive outlook for his team’s findings.  “This new discovery could kick-start the development of powerful and practical next-generation rechargeable batteries such as lithium-sulfur, lithium-air and lithium-metal batteries.”

As always with preliminary research, it may be a while before we see this efficient new electrolyte in our aerial cruisers.  Zhang and his team are working on improvements to their electrolyte, hoping to achieve a 99.9 percent efficiency level and commercial adaptation.  They’re also examining cathode materials that will work best with their electrolyte.

The team’s paper on their findings has been published in the February 16 issue of the journal Nature Communications.   The abstract gives a little more insight into their approach and apparent success, and in a rare example, the entire paper is available on-line for free viewing.  Authors include Zhang, Jiangfeng Qian, Wesley A. Henderson, Wu Xu, Priyanka Bhattacharya, Mark Engelhard, and Oleg Borodin.