Getting your fiber is a good idea for digestion and general health, but what if those fibers get you first?  Or at least destroy your battery?  This is the situation as described by a report from the U.S. Department of Energy (DOE)’s Lawrence Berkeley National Laboratory (Berkeley Lab), in which the writer tells us that dendrites are hairy little lithium fibers that “sprout from the surface of the lithium electrode and spread like kudzu across the electrolyte until they reach the other electrode.”

Dendrite formation in electrolyte separating lithium electrodes in battery. Note initial growth below, rather than on surface of lithium, and final bridging between electrodes

These 3D reconstructions show how dendritic structures that can short-circuit a battery form deep within a lithium electrode, break through the surface and spread across the electrolyte.

Besides resembling a fast-growing invasive plant, the dendrite bridge across the electrodes can cause an internal short circuit and possible fires in the battery, making dendrites extremely unwanted intruders.

Because they pop up from the surface of electrodes, dendrites might easily have been understood as a surface phenomenom.  Nitash Balsara, a faculty scientist with Berkeley Lab’s Materials Sciences Division and a professor of chemical engineering at the University, used advanced equipment, including X-ray microtomography, a kind of industrial magnified CT scan, at Berkeley Lab’s Advanced Light Source (ALS), to determine that those suppositions did not go deep enough.

Balsara and his associates found that “during the early stages of development, the bulk of dendrite material lies below the surface of the lithium electrode, underneath the electrode/electrolyte interface.”  Perhaps non-conductive contaminants in the lithium anode set off this dendrite growth.

Balsara explains, “Contrary to conventional wisdom, it seems that preventing dendrite formation in polymer electrolytes depends on inhibiting the formation of subsurface dendritic structures in the lithium electrode.  In showing that dendrites are not simple protrusions emanating from the lithium electrode surface and that subsurface non-conductive contaminants might be the source of dendritic structures, our results provide a clear prescription for the path forward to enabling the widespread use of lithium anodes.” 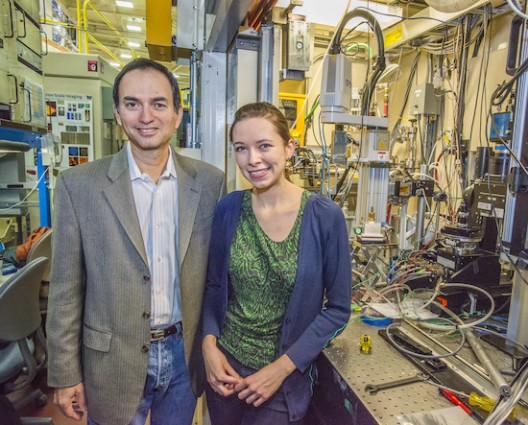 That paper has been published in Nature Materials.   “Detection of subsurface structures underneath dendrites formed on cycled lithium metal electrodes” was co-authored by Katherine Harry, Daniel Hallinan, Dilworth Parkinson and Alastair MacDowell.

The University notes, “This is the first study to employ microtomography using monochromatic beams of high energy or “hard” X-rays, ranging from 22 to 25 keV (kiloelectron-volts), at  ALS beamline 8.3.2. This technique allows non-destructive three-dimensional imaging of solid objects at a resolution of approximately one micron.”

Crystalline contaminants in the lithium anode showed up as bright specks on the resulting images.  The team will make further studies to ensure that they did not introduce outside contaminants in the process of getting those images.  The team also plans further study on the electrolyte’s role in dendrite growth, and on ways to eliminate non-conductive impurities from lithium anodes.

This research was funded by the DOE Office of Science.

To some extent, this research reinforces the work done by NASA’s Eric Darcy in refining production of lithium cells and ensuring that contaminants do not affect the performance or safety of the cells.  This is of extreme importance in Darcy’s applications, which include crafting battery packs in space suits – an environment requiring zero-tolerance for defects.  Although Darcy’s methodology might be more statistical, a combination of his approach and that of the Berkeley researchers could have a profound effect on battery development.