Fred To, who crafted the first solar-powered aircraft to carry a pilot, alerted your editor to the passing of Derek Piggott MBE (Most Excellent Order of the British Empire).  Derek was a master sailplane flight instructor, movie stunt pilot, the first human to successfully take off and fly an aircraft on muscle power alone, and a pioneer in electric aviation.

Your editor met Derek at a Soaring Society of America convention in Seattle, Washington in 1980, and has an autographed copy of his autobiography, Delta Papa: A Life of Flying, as a cherished memento of that event.  It covers his years in the Royal Air Force starting as a cadet, rising to pilot officer, and flying in Canada and India in a variety of gliders and powered aircraft.

An Engine and Pilot

Following his wartime experiences and discharge from the RAF, Derek taught flying in powered craft and gliders.  His experience in what finally amounted to over 300 types of aircraft and his excellent physical condition earned him an offer to fly Southampton University’s Man Powered Aircraft (SUMPAC).

“It was late in the evening on 9 November 1961 that our first real flight was made.  I was one of the most thrilling and memorable moments of my life.”  Filmed by ex-Pathe News cameraman Lawrence Wright, the moment is preserved for posterity.

“Pedaling the machine was rather like riding a tandem bicycle up a gradual slope with the girlfriend not bothering to pedal.  Then as I eased back on the stick, pedals suddenly started to slip a little and it all became easier.  Tremendous excitement!  I pedaled harder trying to make it stay up for as long as possible.  One wing began to drop and we turned slowly off the line of the runway….  I was puffed out with trying so hard to keep up, but by no means exhausted.  I kept saying to myself, ‘It will fly!  It will fly!’”

Almost by chance, he became involved with film making, flying all the aircraft in Those Magnificent Men and the Their Flying Machines (1965) except for the Santos-Dumont Demoiselle, which required someone even lighter than his jockey-size heft.  That job was filled by a petite female pilot, Joan Hughes, who like Piggott and the other pilots in the film went unaccredited.

His work on The Blue Max (1966) involved mass aerial combat scenes and a literally death-defying stunt flying a series of Fokker Triplanes under a bridge between two pillars that left precious little room for error.  In such movies, one must remember that an additional helicopter or airplane is always present – the camera craft, which like the stunt aircraft must be carefully choreographed to prevent unintended collisions.

Darling Lili was a much less successful film and again left Derek unaccredited.  After performing in several other films that relied on his skills with vintage craft, he filled out his movie work playing Sir George Cayley’s coachman in an Anglia Television dramatization in 1972.  Cayley’s “Governable Parachute.”  Since he had little control over this machine, this may have been one of his more dangerous film flights. 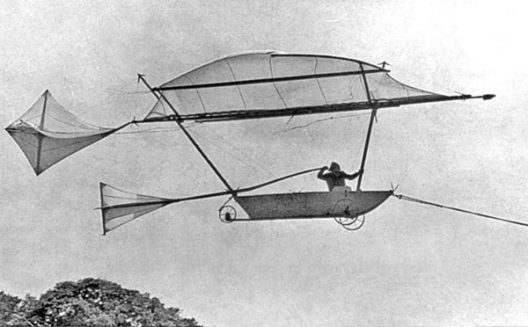 Derek flew an Edgley EA-9 Optimist sailplane with no less than 16 motors for a project created by Queen Mary University of London college students.  He had flown the glider first in 1994, then again in September 2008 with the brushless Graupner motors powering it.  Note that Derek would have been 86 at this time, making him possibly the oldest test pilot in history. 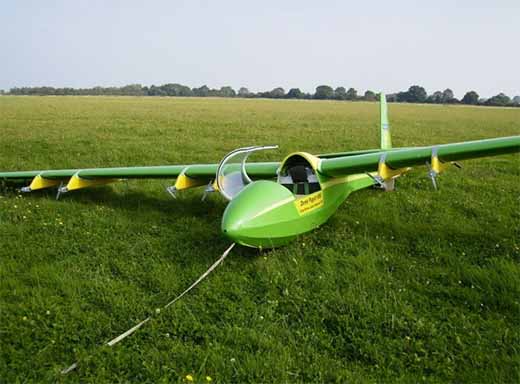 “We are sad to announce that one of our UK (and Lasham) gliding legends has passed away.

“Derek Piggott MBE enjoyed a very full and happy life for 96 years and passed away this afternoon with Maria at his side, in the Princess Alice Hospice having suffered a severe stroke on the 15th December. Up until then, he was fiercely independent, still drove and visited (and flew) recently here at Lasham. 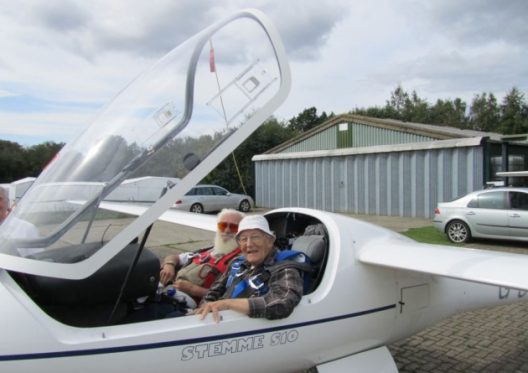 “Many of you will have known him personally and all will know his reputation as a fantastic glider pilot, instructor and aviation writer. He had flown over 5,000 hours on over 150 types of powered aircraft, and another 5,000 in more than 180 different gliders. Included in those flights were several stunts for Chitty Chitty Bang Bang, Those Magnificent Men in Their Flying Machines and Von Richthofen and Brown (The Red Baron). He was Chief Flying Instructor here at various times between 1953 and 1989, and set various national records including the single seat altitude record of over 25,000′ in an active thunderstorm in a Slingsby Skylark; and completed a Nationals 505Km task in a Fedorov Me7 Mechta glider at the age of 81.

“He will be sorely missed, having made huge contributions that have made Lasham and Gliding as a whole as safe and successful as it is today. We pass our heartfelt condolences to his family.”