Masdar Institute of Science and Technology is a multi-faceted research center, which although small at this time, seems to be fairly prodigious in the output of patents, patents pending and academic papers. 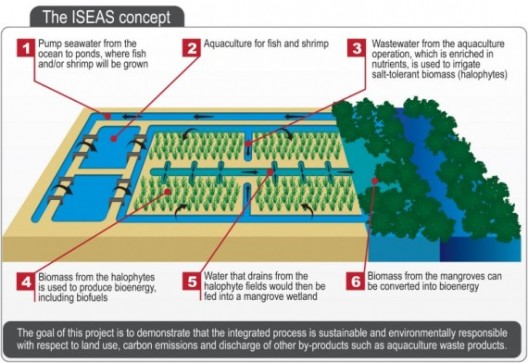 The Institute heads a program to use “coastal seawater to raise fish and shrimp for food, whose nutrient-rich wastewater then fertilizes oil-rich halophyte plants that can be harvested for aviation biofuel production.”  Halophytes, as those who’ve listened to or read Dennis Bushnell’s comments will know, thrive in harsh conditions including a diet of saltwater.

Working with a consortium including Masdar, Etihad Airways, Boeing and Honeywell UOP, and later joined by aerospace companies Safran and GE, Masdar Institute’s initial laboratory-scale demonstrations could become a major contributor to independence from fossil fuels.

Masdar CEO Dr Ahmad Belhoul reflects on the implications for producing food and fuel in water and arable land constrained regions. “Considering that about 20-percent of the world’s land is desert and 97-percent of the world’s water is salt water, this approach turns a land and water resource scarcity problem on its head by creating a bioenergy solution applicable in countries around the globe.”

According to Masdar, “Halophyte plants thrive in arid desert conditions and do not require fresh water or arable land to grow. After the fertilisation process, the effluent is passed through cultivated mangroves before being discharged back into the sea, further removing nutrients and providing valuable carbon storage.”

The Sustainable Biofuels Research Consortium (SBRC) says the pilot project’s goal will be to, “demonstrate the integrated bioenergy process as a commercially viable and sustainable system with respect to essential  food and fuel production, suitable land use, reduced carbon emissions and wastewater clean-up.”

After beginning with only the small-scale growing of small amounts of seed samples (collected from Texas) Linden Coppell, Head of Sustainability at Etihad Airways, explains the coming attempt to scale the process to larger dimensions. “This is a big step – actually replicating the entire Integrated Seawater Energy and Agriculture System (ISEAS) in ‘pilot’ scale – with all the elements of the system allowing us, for example, to manipulate it with varying salt and nutrient levels. This will allow us to more confidently scale up to the 200-hectare site we have assigned in a couple of years.”

Barbara Bramble, Chair of the international standards body Roundtable on Sustainable Biomaterials (RSB), praises the effort.  “The Masdar Institute research is truly game-changing for large-scale biofuel production.  This project puts the UAE at the forefront of a global movement to create sustainable alternative fuels that support – not compete with – food production and fresh water conservation.”

The fuel produced is also better than those being produced as the search for usable oil supplies becomes more difficult and costly.  Darrin L. Morgan, Director Sustainable Aviation Fuels and Environmental Strategy at Boeing, says that researchers discovered that the biofuels that are now approved for use in aircraft are technically superior to kerosene jet fuel. “There is no question about that,” says Morgan.  While that was a surprise, another came in his assertion that the quality of oil coming into the market from unconventional sources such as shale or tar sands products is poorer.

Announced during Abu Dhabi Sustainability Week, the project seems well suited to be presented during the included World Future Energy Summit and International Water Summit.  It’s also another highlight of a week that featured Masdar’s solar energy and an airplane that will fly on no fossil fuels at all on its grand trip around the world.