Dr. Brien Seeley has a dream, often repeated in this blog, of bringing pocket airparks into our neighborhoods.  But the ideal of commuting by small two-seat aircraft and alleviating the crushing gridlock on our highways can only be realized with aircraft that are quiet, able to land and take off within a football field (much like ultralights), and yet cruise at up to 200 miles per hour (much like high-performance lightplanes).  This amalgamation of Quicksilver and Lancair might seem unlikely, but Dan Raymer showed attendees at this year’s Electric Aircraft Symposium a possible solution to the dichotomy. 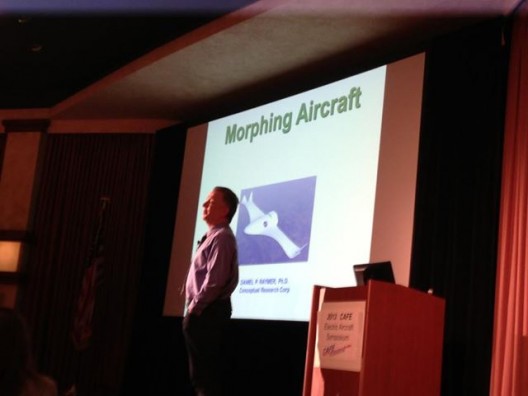 Raymer, head of Conceptual Research Corporation and author of Aircraft Design: A Conceptual Approach, and Dan Raymer’s Simplified Aircraft Design for Homebuilders, is an internationally-recognized expert in RDS, or robust design strategies.  RDS is defined as a systematic approach to finding optimum values of design factors which result in economical designs with low variability.  As a recognized expert in this area, Raymer brought his insights and computerized design skills into play to meet Dr. Seeley’s challenge – all within a two-day deadline for his evening presentation, his second of the day.

A morphing airplane can change its external shape in flight, achieving previously unattainable efficiency, according to Dr. Raymer.  Making this happen can include using mechanical pivots and actuators, stretching flexible skin that can provide smooth contours over a pivoting frame.

One form of this, the telescoping wing, shows up in a November 1939 Popular Science article. 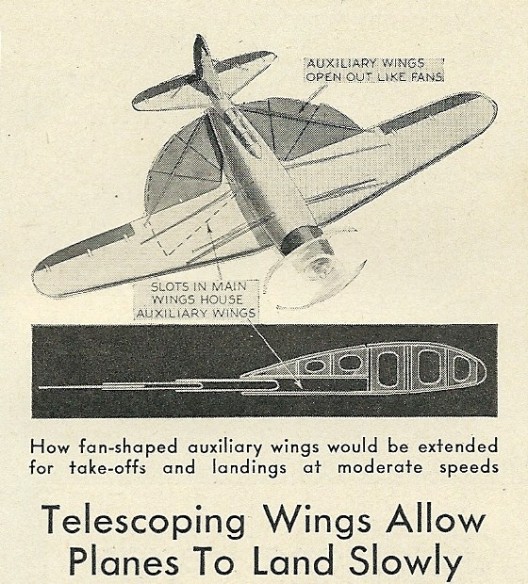 Later designers would actually build a mechanically-actuated telescoping wing on the Akaflieg Stuttgart FS29, which used a long circumferential belt to extend and retract outer wing panels over the inner panels.  With outer panels pulled in, spoilers were covered and could not be used, but the reduced span of 13.3 meters (43.63 feet) was intended for fast inter-thermal cruising and the longer span of 19 meters (62.34 feet) for circling in thermals, landings and takeoffs. 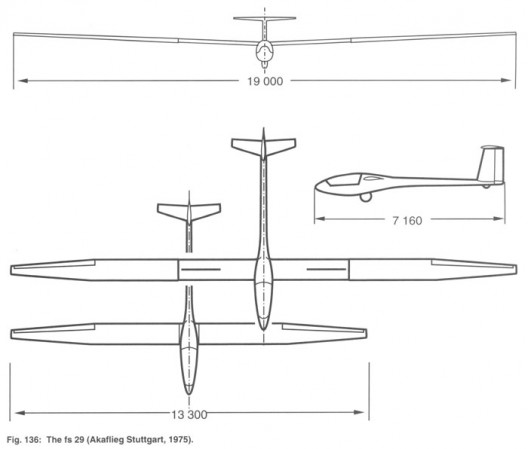 Newer technologies have provided us with shape memory polymers, alloys, and piezoelectric actuators, and with the proper skin, could produce variable shapes tailored to the exact aerodynamic needs of the moment, as shown in the NASA video below.

Raymer’s fast electric short takeoff and landing (ESTOL) craft would use technology similar to that on the FS29 and look like a small Corsair fighter from WW II. Its 400 pound payload would be enough to carry two.  With its wing in its full-extended state, it could maintain control at 32 knots (36.8 mph), set down in a football field and with the wings tucked in, cruise at 120 mph.  The reduced total wetted area would allow this fast cruise.

A powerful electric motor would enable quiet takeoffs at the neighborhood airpark, and the longer wings would reduce induced drag and span loading, and increase the rate of climb.

With smart materials increasingly in evidence, wings may someday morph in what are now only hoped-for ways, an affirmation that the Wright Brothers may have had it right the first time around.