We’ve witnessed several attempts to produce an “artificial leaf,” a device emulating the photosynthesis of plants, but providing hydrogen and oxygen that could power fuel cells in electric vehicles instead of plant sugars to make trees and flowers grow.  One of the biggest problems so far has been the rare and costly materials necessary to generate hydrogen.

Perovskites are a calcium titanium oxide mineral that come in a variety of colors and can be bog-common or extremely rare, approaching rare earth mineral status.  The CaTiO3 used by Michael Grätzel is of the common variety, but that doesn’t seem to detract from its performance as a hydrogen-production agent.

That, and the inexpensive materials used in the device’s electrodes cause Jingshan Luo, a post-graduate student on the project, to note,” “Both the perovskite used in the cells and the nickel and iron catalysts making up the electrodes require resources that are abundant on Earth and that are also cheap, However, our electrodes work just as well as the expensive platinum-based models customarily used.”

The work, done at the Laboratory of Photonics and Interfaces at EPFL, is led by Grätzel, who directs the Laboratory of Photonics and Interfaces at the Polytechnique.  According to his university biography, “He pioneered the use of mesoscopic materials in energy conversion systems, in particular photovoltaic cells, lithium ion batteries and photo-electrochemical devices for the splitting of water into hydrogen and oxygen by sunlight. He discovered a new type of solar cell based on dye sensitized nanocrystalline oxide films. Mass production has started in October 2009. Author of over 1,000 publications, two books and inventor of more than 50 patents, his work has been cited over 134,000 times (h-index 167) making him one of the 10 most highly cited chemists in the world.”  He’s also won awards that take up a very long paragraph in his bio.

Pulling on past experience, Grätzel and his team have created a solar converter with “spectacular” performance.  It could generate electricity directly, but that would limit its energy use to simultaneous delivery and keep that energy from being used at night.  Grätzel and his researchers chose to store the hydrogen generated by their device. 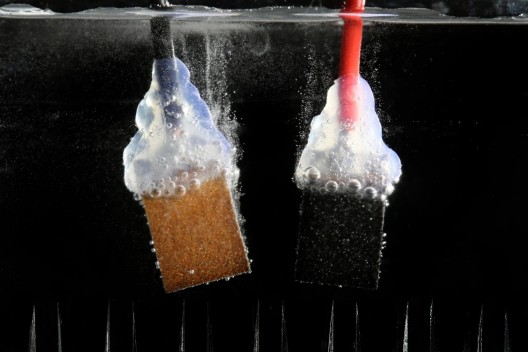 One indicator of the converter’s performance is the fact that it uses only two cells to generate hydrogen.  Jingshan Luo explains, “A voltage of 1.7 V or more is required for water electrolysis to occur and to obtain exploitable gases.  This is the first time we have been able to get hydrogen through electrolysis with only two cells!”  Usually, three or more 0.7 V silicon cells are needed, whereas just two 1.0 V perovskite cells are enough, showing a big bump in efficiency for the more common material.

Grätzel explains, “Once you have hydrogen, you store it in a bottle and you can do with it whatever you want to, whenever you want it,”  burning it in a boiler or engine, or using it in a fuel cell to generate electricity when desired.  Either way, the combustion releases only water vapor.

The profusion of tiny bubbles escaping from the electrodes as soon as the solar cells are exposed to light say it better than words ever could: the combination of sun and water paves a promising and effervescent way for developing the energy of the future.  Since most such discoveries have applications for solar cells, hydrogen generation, and possibly batteries, we anxiously await the team’s even more efficient perovskite breakthrough.