Morgan McCorkle at the Department of Energy’s Oak Ridge National Laboratory in Tennessee reports that researchers there have developed a lithium-carbon fluoride battery with a thiophosphate electrolyte that generates 26 percent higher capacity than its theoretical maximum if all the components acted independently.  This serendipitous outcome causes researcher Chengdu Liang to say, “This bi-functional electrolyte revolutionizes the concept of conventional batteries and opens a new avenue for the design of batteries with unprecedented energy density.”

We’ve become accustomed to thinking that a battery’s “three main components – the positive cathode, negative anode, and ion-conducting electrolyte – can play only one role in the device.”

ORNL’s battery has a specially-developed solid electrolyte that functions as an ion conductor, and also serves as a cathode supplement, boosting the cell’s capacity and extending the life of the battery. 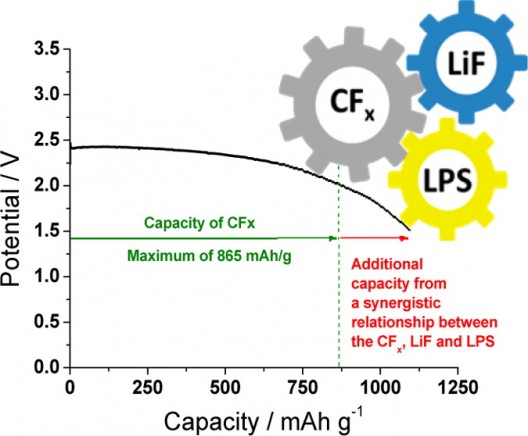 ORNL primary battery shows energy density, longevity beyond expectations.  Now if it could only be rechargeable

The big drawback at this time is the single-use nature of the battery – a primary unit that is not rechargeable (so far).  The lithium carbon fluoride battery has high energy density, stability and long shelf life.   Adding the solid electrolyte to the battery generated a 26-percent higher capacity than what would be its theoretical maximum if each component acted independently.  Liang says the “cooperative interactions between the electrolyte and cathode” help account for the increases in energy density and longevity.

“As the battery discharges, it generates a lithium fluoride salt that further catalyzes the electrochemical activity of the electrolyte.  This relationship converts the electrolyte – conventionally   an inactive component in capacity – to an active one.”

Single-use batteries such as those in pacemakers or remote keyless systems and radio repeaters on distant ridges are not always available for replacement or recharging.  Longer battery life would enhance their use and might even find favorable application in aircraft communications, where lightness might be more desirable than secondary recharging.

The improvement in capacity could translate into years or even decades of extra life, depending on how the battery is engineered and used. Longer-lived disposable batteries are in demand for applications such as such as artificial cardiac pacemakers, radiofrequency identification devices, remote keyless system, and sensors, where replacing or recharging a battery is not possible or desirable.

“If you have a pacemaker, you don’t want to undergo surgery every 10 years to replace the battery,” Liang said. “What if a battery could last 30 to 50 years? Our fundamental research is opening up that possibility through a new design mechanism.”

The abstract for the team’s paper, recently published in the Journal of Applied Chemistry, explains the basics of the breakthrough.  Authors include: Ezhiylmurugan Rangasamy, Juchuan Li, Gayatri Sahu, Nancy Dudney, and Chengdu Liang.

In a typical battery, the inert electrolyte functions solely as the ionic conductor without contribution to the cell capacity. Here we demonstrate that the most energy-dense Li-CFxbattery delivers a capacity exceeding the theoretical maximum of CFx with a solid electrolyte of Li3PS4 (LPS) that has dual functions: as the inert electrolyte at the anode and the active component at the cathode. Such a bifunctional electrolyte reconciles both inert and active characteristics through a synergistic discharge mechanism of CFx and LPS. The synergy at the cathode is through LiF, the discharge product of CFx, which activates the electrochemical discharge of LPS at a close electrochemical potential of CFx. Therefore, the solid-state Li-CFxbatteries output 126.6% energy beyond their theoretic limits without compromising the stability of the cell voltage. The additional energy comes from the electrochemical discharge of LPS, the inert electrolyte. This bifunctional electrolyte revolutionizes the concept of conventional batteries and opens a new avenue for the design of batteries with unprecedented energy density.

This blog has reported on an earlier fluoride battery from the Karlsruhe Institute of Technology (KIT) announced at the 2011 Detroit Auto Show.