Solar Impulse HB-SIA, flown by project CEO Andre Borschberg, crossed the border into Spain after flying over mountainous terrain for over 17 hours on the first leg of its Payerne, Madrid, Rabat trip.  During the flight, the prototype crossed from Switzerland into France at an altitude of 3,600 meters (11,800 feet) 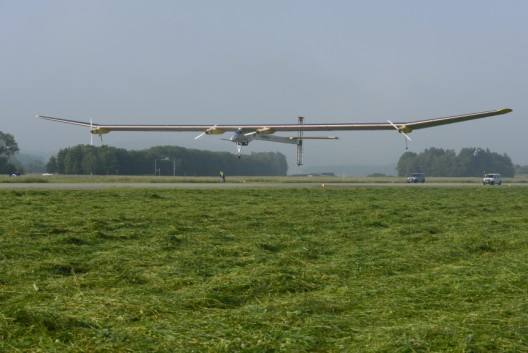 The project’s blog explains, “The Solar Impulse airplane took-off this morning at 08h24AM (UTC+2) from Payerne aerodrome in Switzerland following the previously scheduled flight plan over the Pyrenees. The aircraft flew over the Massif Central towards the city of Toulouse (France), flying over the Pyrenees mountain range at an altitude of 7’833 meters (25,699 feet) and finally arriving in Spain, landing on Runway 33L.”  The airplane managed the 1,191 kilometer (738 mile) voyage at an average ground speed of 89 kilometers per hour (55 mph) and reached a peak altitude of 8,500 meters (27,888 feet).

(Patrick McLaughlin is a close friend who spoke at the sixth annual Electric Aircraft Symposium on his remarkable motor controller.  He is also the founder of Mountain High Oxygen in Redmond, Oregon, the exclusive supplier of oxygen systems to Solar Impulse.  His electronic delivery system (EDS) ensures that a charge of air enters the pilot’s lungs at just the right pressure for a given altitude and at the right point in the pilot’s breathing cycle, based on readings of physiological variables.  Your editor would like to think that helped account for Andre’ Borschberg’s alertness during the long trip.)

“The flight went very well and thanks to the team of meteorologists, everything went according to the plan: it was extraordinary” Said André Borschberg “It was incredible to fly alongside the barrier of clouds during most of the flight and not need to hesitate to fly above them. This confirms our confidence in the capacity of solar energy even further.”

Under the high patronage of His Serene Highness Prince Albert II of Monaco and King Mohammed VI of Morocco, and by invitation from the Moroccan Agency for Solar Energy (Masen), the flight is intended to “raise awareness [of] solar energy’s potential to minimize global dependence on petrol and its derivatives.

Solar Impulse’s arrival in Rabat, Morocco will coincide with the beginning of construction of the world’s largest thermo-solar power plant in the Quarzazate region of the host country.  With 160 megawatts capacity, the plant is the first of five solar parks which will have a total output of 2,000 MW and reduce CO2 emissions by 3.7 million tons from those of equivalent fossil-fuel powered facilities.

“’Solar Impulse symbolizes the pioneering and explorer spirit necessary to find new solutions, outside of old habits and certainties, to respond to today’s challenges.’ Said Bertrand Piccard at the Solar Impulse HB-SIA landed on the runway.” 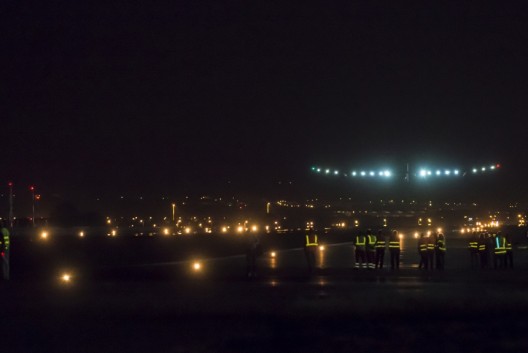 After a three-day technical check-up, project founder and Chairman Bertrand Piccard will fly HB-SIA 800 kilometers (496 miles) across the Mediterranean to Rabat-Sale’ airport, a 20-hour crossing.

Readers can continue to follow the flight live on www.solarimpulse.com as well as via Twitter (for André or Bertrand), Facebook and via the Smartphone app ‘Solar Impulse Inventing the Future’.