Phil Barnes has an impressive set of credentials, and an even more impressive body of work.  Having seen three of his presentations at the Experimental Soaring Association’s Western Workshops, this writer can attest to the breadth and depth of his knowledge.

According to his biography, “Phil Barnes has a Master’s Degree in Aerospace Engineering from Cal Poly Pomona and a Bachelor’s Degree in Mechanical Engineering from the University of Arizona. He has 25-years of experience in the performance analysis and computer modeling of aerospace vehicles and subsystems at Northrop Grumman. Phil has authored technical papers on aerodynamics, gears, and flight mechanics.”

He now has his own web site, How Flies the Albatross, where readers can interact with the flight of the albatross in simulated dynamic soaring conditions, with mathematical explanations of a very high order.  Barnes took all the photographs of albatrosses in flight, and are another impressive facet of his abilities.

Imagine a sailplane that self-launches using the battery power to its electric motor, but leaves its large propeller out in the breeze to regenerate energy and recharge itself.  At first glance this could be seen as another perpetual motion scheme, but Barnes provides a detailed mathematical proof that the sailplane could enjoy a net gain in energy during its flights, allowing unlimited time in the air.  He adds a solar option that would further increase the utility of the craft.

Barnes draws on Hermann Glauert’s seminal 1926 paper and Paul MacCready’s 1998 presentation, which introduced the idea “with caution.”  Literally throwing caution to the winds, Barnes investigates the possibilities that Glauert called a “windmill on an aeroplane,” and MacCready outlined as “regenerative soaring, where in concept, an aircraft would incorporate energy storage, a propeller, and a wind turbine, or dual-role machine thereof, to propel the aircraft and regenerate stored energy in updrafts.”  Examining the dynamic soaring of the albatross, we can see the similarities to what Barnes has in mind, and the cross-currents of his thinking. 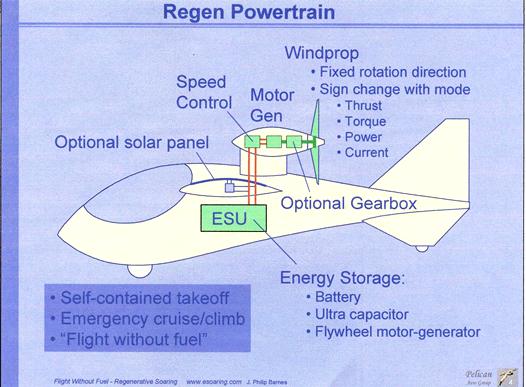 The idea of regeneration implies a motor/controller system that like an electric car’s regenerative braking, puts energy back into the batteries when the motor is not providing power for the airplane.  It would also require a highly efficient regenerative mode.

He notes that solar panels collecting 150 Watts per square meter would allow extended flight, but only on a augmentation basis and not as a primary power source.

Knowledgeable readers can help him make this possible.  Explaining that he hopes to create a model-airplane sized demonstrator, he details his “wish list”:

The system I’m searching for does this:

1) Advance the throttle for prop operation

– same rotation direction for windprop, but with 30% lower RPM during regeneration

– as in my attached package

His contact information is on the web site, exposure to which will inspire many grand ideas, some of which may provide feedback for Barnes’ grand project.