Anne Lavrand, Electravia’s General Manager, announced the E-Fenix, the first two-seat electric paratrike.  Developed with Planète Sports & Loisirs, a leisure activities company based on Re Island, off the coast of La Rochelle, France, the trike will carry visitors on discovery flights over the scenic island. 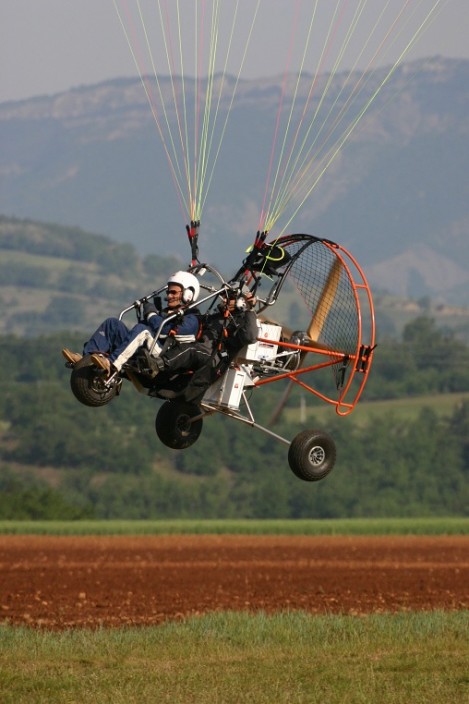 E-Fenix has an electric propulsion system from Electravia, which includes a 35-horsepower GMPE 104 motor, an E-Props QD2 four-blade propeller, and a six kilowatt-hour Kokam Lithium-Polymer battery.  All is carried aloft on a 38-square-meter ITT Bulldog wing, which can fly 35 minutes with two persons aboard, and 55 minutes with only the pilot.  First flights took place on May 12th, with Michaël Morin as test pilot.

Reported to be “very silent and comfortable,” the trike must be registered by the French Civil Aviation Administration (DGAC) before being used commercially.

E-Fenix on the Isle of Re, awaiting its first scenic ride passenger. Note the green windsock

Electravia has a full range of projects and has been in the forefront of early electric flights, including the first electric ultralight flight of 48 minutes with their Electra, a modified Souricette; a one-hour, nine-minute flight in January 2009 with their Alatus ME; and recently, a 162 mph speed record with a twin-motor electric Cri-Cri.   They are now working on one- and two-seat ultralights – the latter a flying wing! – to be powered by their motor packages.