European Aeronautic Defence and Space Company (EADS) has been heating up some batteries lately, announcing production plans for the E-Fan prototype unveiled at the 2012 Paris Air Show and showing a four-seat derivative, the 4.0.  Both share the twin-motor ducted fan configuration that makes the trainer and light electric airplane look like an A-10 Warthog, but with much less fearsome aspects.

Tony Osborne, reporting in the May 8 online Aviation Week and Space technology, reports, “To produce Europe’s first wholly electric-powered aircraft the Airbus Group is partnering with French industry and entering the light aircraft market.  A new subsidiary, VoltAir [lovely French pun], will be set up in the coming months to develop and produce the two-seat E-Fan 2.0 and the four-seat E-Fan 4.0. The two models are being aimed at the general aviation market, and officials say prices will be competitive with those of current piston-engine light aircraft—around $300,000—but with operating costs that are less than a fraction of those aircraft, as well as potentially significantly lower maintenance costs.”

These craft will be in the forefront of efforts to meet the European Union’s Flightpath 2050 targets of reduced CO2 emissions (down 75 percent), NOX (down 90 percent), and noise (65-percent below 2000 levels).

The all-composite E-Fan demonstrator weighs 580 kilograms  (1,280 pounds – putting it solidly in the LSA category ) and can seat two in a tandem configuration.   Its two 30-kilowatt (40.2 horsepower) motors drive eight-blade ducted fans, “which engineers say boosts the levels of static thrust.”   This allows a cruise speed of 86 knots (160 kilometers per hour,  99.2 mph).   Range is not great so far, with a longest flight by test pilot and designer Didier Eseyne putting only 37 minutes on the electronics equivalent Hobbs meter.  EADS says 45 minutes is best design endurance – to be increased as battery technology catches up with the airplane’s svelte aerodynamics. 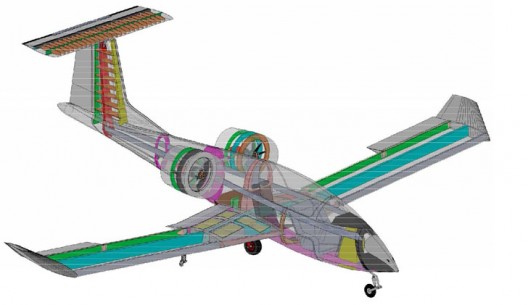 Airbus E-Fan prototype in cutaway form.  2.0 will be side-by-side with fixed tricycle gear

The landing gear shows a small bit of bigger Airbus products, taxiing with an electrically-driven main wheel, which assists in the takeoff run, helping to accelerate the 2.0 to 60 kilometers per hour (36 mph).

Esteyne has put 15 hours on the airplane with 35 hours to go on the test program.  With battery improvements on the way, Airbus hopes to achieve one hour endurance with a 15-minute reserve.    To extend that, engineers are developing an optional “range extender with a generator, described as similar to a lawn mower engine, to charge the onboard batteries,” and raise the range of the four-seater to three-and-a-half to four hours.  Even now, the 2.0 has an on-board charger that allows a full-charge turnaround time of one-and-a-half hours.

Aero Composites Saintonge (ACS) built and demonstrated an electric-powered version of the Cri-Cri twin-piston-engine light aircraft in 2010, and their  2011 Eurocopter autorotated with an  electric motor that could provide emergency power. 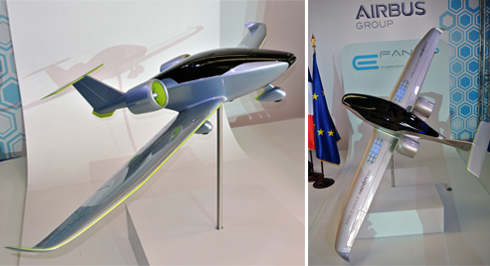 Because the Cri-Cri was successful, Airbus asked for a purpose-built small airplane, the E-Fan first publicly  flown on April 25 as part of Airbus’ E-Aircraft Day.   Airbus engineers have found challenges in reducing electromagnetic interference in radios and other systems, and despite the low vibration of electric motors, protecting wiring from the small amount there is.  One thing pilots will appreciate; they created an energy management system called “e-Fadec.”

The E-Fan’s motors are powered by a series of 250V Lithium-ion polymer battery packs, comprising 120 each, 40Ah, 4V cells made by KOKAM.

While the prototype E-Fan has a tandem fuselage, he production 2.0 will be a side-by-side configuration, “with a streamlined, non-retractable landing gear and the two motors fitted to the rear fuselage. Airbus hopes to achieve 95 percent parts commonality between the two aircraft, with the four-seat variant just 35 cm (14 in.) longer than the two-seat version.

The shops at Bordeaux will be able to build as many as 80 E-Fan aircraft each year, which might be a moot point until a market develops.  Chief Technical Officer Dr. Jean Botti points out “that in France, some light aircraft flying is banned during certain times of the day to reduce environmental impact, but the electric aircraft’s noise levels would help avoid such a limitation.”

For short missions such as training or aerobatics, Airbus thinks the two-seat E-Fan can lower instruction rates, about one-fourth a conventional trainer’s operating costs per hour

With a giant firm such as Airbus behind this new enterprise, we can hope that other major aircraft companies can unleash their competitive spirits.