Emmanuel Joubert, Program Head for the All-electric Cri-Cri at EADS, explained the plane’s advantages.  “In all-electric mode, the plane’s performance during climb and aerobatics is better compared to a conventional aircraft of this type.  This allows the pilot to really have ‘fun flying’ – with no noise and high torque at low and high speed.”

Because of the light weight and small size of the Cri-Cri, initial flights were limited to 20 minutes, but now run 30 minutes, with further work expected to lead to 35-minutes.

Joubert noted that because of the small size of the craft, “All innovative concepts and technologies applied in this platform need to be downscaled to a very small size and very light weight, which leads researchers to be very creative.”

According to EADS’ press release, “The combined utilization of these environmentally friendly technical innovations enables the Cri-Cri to deliver novel performance: 30 minutes of autonomous cruise flight at 110 kilometers per hour, 15 minutes of autonomous aerobatics at speeds reaching up to 250 km/h, and a climb rate of approximately 5.3 meters per second (1,017 feet per minute).”

Partnering with Siemens AG and Diamond Aircraft, EADS displayed what they claim is the world’s first aircraft with a serial hybrid electric drive system at Le Bourget.  The two-seater motor glider is being used to test the new system, which could provide up to a 25-percent reduction in fuel use, and could be scaled up for larger aircraft.

Siemens, provider of the power system, explains, “The motor glider, which is based on Diamond Aircraft’s HK36 Super Dimona, is the only aircraft of its kind in the world. It is the first to use a so-called serial hybrid electric drive, which has been utilized to date only in cars, as an integrated drive train. The plane’s propeller is powered by a 70kW electric motor from Siemens. Electricity is supplied by a small Wankel engine from Austro Engine with a generator that functions solely as a power source. A Siemens converter supplies the electric
motor with power from the battery and the generator. Fuel consumption is very low since the combustion engine always runs with a constant low output of 30kW.

“A battery system from EADS provides the increased power required during takeoff and climb. The accumulator is recharged during the cruising phase. ‘The serial hybrid electric drive concept makes possible a quiet electric takeoff and a considerable reduction in fuel consumption and emission,’ said Christian Dries, the owner of Diamond Aircraft. ‘It also enables aircraft to cover the required long distances.’”

As with the Cri-Cri, further development is in progress.  Siemens expects an electric motor five times lighter than conventional units in about two years, part of a new demonstration system and aircraft. 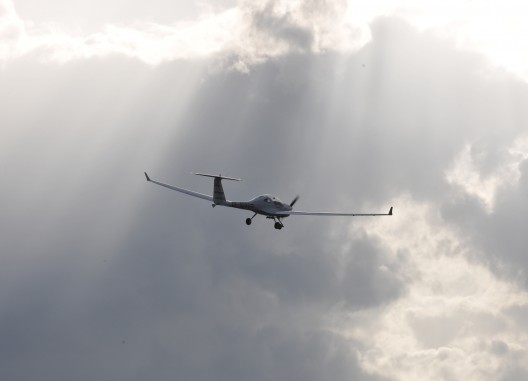 EADS also introduced a concept vehicle, VoltAir (a pun on the name of radical French writer Voltaire?), a zero-emission aircraft “which could become a reality 20 years from today” according to EADS.  This project is included under the name ” eCO2avia” by EADS Innovation Works as part of its work toward protecting the environment.

The project is based on speculative assumptions about how the airplane’s next-generation batteries will “exceed energy densities of 1000 Wh/kg within the next two decades,” and power superconducting electric motors to drive counter-rotating shrouded propellers.  EADS predicts, “Combined with a radical approach to airframe design, the expected promising developments in electric propulsion technologies could pave the way towards ultra-quiet and emission-free flight.”

Jean Botti, Chief Technical Officer of EADS, says the company is pursuing “new materials with promising capabilities” in its battery research, including lithium-air and lithium-sulfur based energy storage systems.

EADS thinks that despite the high efficiency of modern conventional electric motors, they do not have the power density required for “large airborne missions,” and is investigating High-Temperature Superconducting (HTS) materials for VoltAir’s propulsion.  In flight, these motors would be cooled by liquid nitrogen (low-cost and environmentally friendly according to EADS).  VoltAir’s motors could deliver seven to eight kilowatts per kilogram, not that extreme compared to some existing motors.

Passengers will benefit from the fuselage shape, wide compared to its height, unlike conventional round tubes on most modern airliners.  The superconducting motors, removed to the tail, will provide quiet power and only wind noise over the fuselage will require attenuation.

EADS has a tremendous range of sizes and styles to choose from, and seems to be making a serious and concerted effort to move into the next level of electrification.  All of aviation will benefit from their innovations.

The origin of the term “hat trick” goes back into sporting history, being associated with a particularly skilled cricketeer who, while bowling, managed to retire three batsmen with three consecutive balls.  According to the story, the other players passed the hat to take up a collection in honor of his accomplishment.