Nobody wants an airplane fire.  You’re way up in the air, can’t pull over to the curb, and have limited means of quelling the flames.  The most energy-dense batteries, based on lithium chemistries, are subject to failure from physical and electrical abuse.  Most cells run through their promised cycle life without giving a hint of trouble, but sometimes fate or mischance leads to disaster.

Battery alternatives with lower risk usually possess lower energy and/or power density, crucial to use in aircraft, since weight is usually a primary consideration in vehicle design.

Lithium fires are quite often spectacular, probably a consideration that prompts Dale Kramer to recharge his 100 pounds of cells in his fireplace – with the flue wide open.  Even small cells found in laptop computers and cell phones have caused injury and death to their users.

For all lithium battery users, some reassurance may be found in news from the Johns Hopkins University Applied Physics Laboratory (APL) in Laurel, Maryland.  Researchers there have developed a sensor that uses the “intrinsic relationship between the internal temperature of lithium-ion cells and an easily measured electrical parameter of the cell,” to warn of impending meltdowns.

“An abnormally high internal cell temperature is a nearly universal manifestation of something going awry with the cell,” says Rengaswamy Srinivasan, a chemist in APL’s Research and Exploratory Development Department and one of the inventors.  “These changes can occur within seconds, leading to a potentially catastrophic event if corrective measures are not taken immediately. When things start to go wrong inside the cell, time is not on your side.”

Most systems in aircraft have some form of a battery management system (BMS) which permits even charging and discharging of individual cells in a battery pack; and a protection circuit module (PCM) which protects the battery pack from overcharging, over-discharging, and excessive current either being applied to or drawn from the cells.

The APL researchers discovered a crucial element not found in existing battery management systems.  A small alternating current at specific frequencies is modified by a lithium cell “in such a way that is directly related to the temperature of the critical electrochemical interface between the electrodes and the electrolyte.”

“We discovered that we can measure the temperature of the protective layers between the electrodes and the electrolyte of the battery during normal operation,” Srinivasan says. “These layers are where the conditions that lead to thermal runaway and catastrophic cell failure begin.  This discovery enables us to detect potentially unsafe thermal conditions before surface-mounted temperature sensors, which are the current state of the art, are able to register that any change has taken place.”

A single sensor acting through an electrical connection at the positive and negative terminals of the cell can be powered by the battery it monitors and with multiplexing circuitry “can monitor multiple cells in a battery pack.”

Srinivasan hopes that battery makers will integrate APL’s new technology into their products, increasing safety and performance.  APL is in the process of applying for patents for the sensor and checking licensing agreements.

LiPo batteries contain lithium. If lithium is exposed to air with even a slight amount of humidity, it can ignite, releasing hydrogen and other chemicals.
Hydrogen is extremely explosive, and is ignited by the burning lithium, resulting in a violent flare-up.

The usual cause of flare-ups is mishandling, which causes a buildup of gas in the battery, leading to a characteristic “LiPo puff” — the
swelling of the battery package. If the “puff” is large enough, the package may rupture, exposing the lithium to air.

LiPo batteries require chargers made specifically for them. Using the wrong type of charger is likely to cause a flare-up.

If too much current is drawn (“overloading”), the battery will become very hot and release gas internally.  The battery will rupture, exposing the lithium to air, resulting in a fire.

Anything that breaks open a LiPo battery pack, even a small puncture, will likely result in a fire.

And a good “as told to a friend” story helps illustrate the destructive potential of such conflagrations. 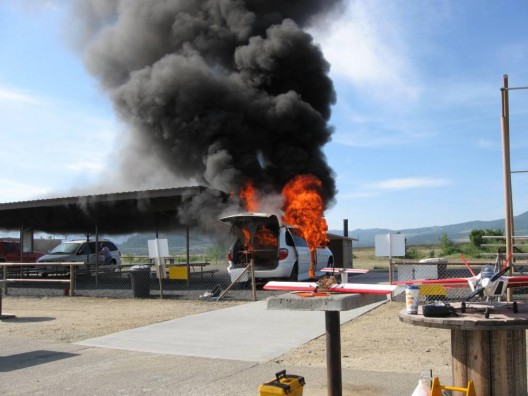 Hardly the way you want your 15 minutes of fame

A radio-control flyer left a 2,100 mAh pack in his minivan, plugged in to the charger/cell balancer.  He set the charger to “about 1,000 mAhs and left the van unattended for three or four minutes.  The three Lipo batteries in the front seat exploded, causing a fire that led to the subsequent explosions of the car battery, tires, and gas tank.  The flyer’s 15 minutes of fame came on the Channel 12 news that evening.

With news that electric and hybrid cars like Fiskers and Volts are being recalled for similar battery-related fires, early warnings of catastrophe are more than welcome.