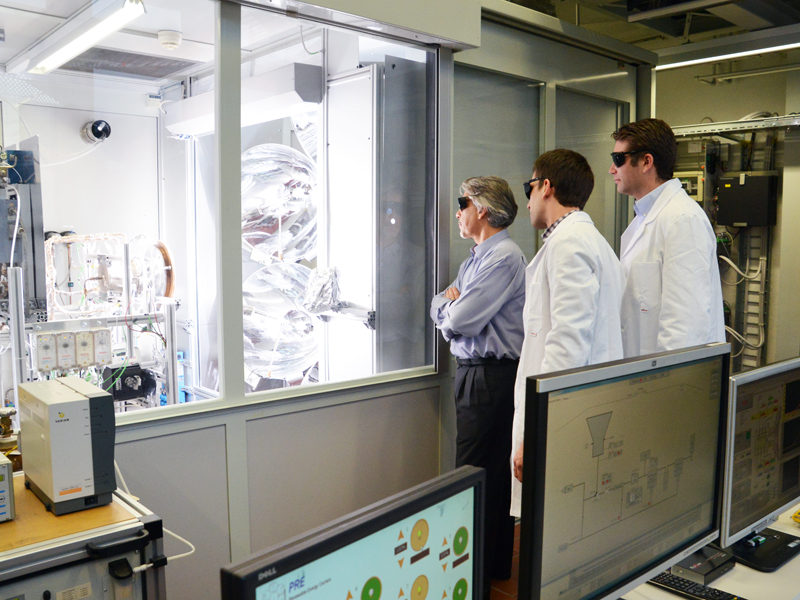 “I have always loved the desert. One sits down on a desert sand dune, sees nothing, hears nothing. Yet through the silence something throbs, and gleams.”

The SOLAR-JET project (Solar chemical reactor demonstration and Optimization for Long-term Availability of Renewable JET fuel. or SOLAR-JET) pulls carbon dioxide from the air, mixes it with water and exposes the mix to 1,500 degree (Centigrade) concentrated solar energy and makes a synthetic natural gas, with oxygen as the only exhaust.  Attempting to produce a useable fuel from CO2 has been an obsession for many over several decades.  Attempts to capture and store CO2 are expensive and usually only hide the carbon, ostensibly for eternity.

SOLAR-JET explains its objectives on its web site.  “The aim of the SOLAR-JET project is to demonstrate a carbon-neutral path for producing aviation fuel, compatible with current infrastructure, in an economically viable way.  Because the process hopes to pull CO2 from the atmosphere, the CO2 produced by its eventual combustion would be neutral – equal to the CO2 removed from the air to produce the fuel.

Researchers at Switzerland’s ETH are using a high-temperature solar reactor “fashioned from a helpful ceramic” to “split carbon dioxide and water.  They send the resulting compressed synthetic gas to chemists in Amsterdam, who use the Fisher-Tropsch process to convert the syngas into kerosene “that flies jumbo jets around the world.”

The high-temperature solar reactor contains “a reticulated porous ceramic (RPC) structure made of ceria (CeO2) which facilitates molecule splitting.”  Ceria is an oxide of the rare earth cerium – the most abundant of such elements.   Post-doctoral researcher Philipp Furler explains, “Ceria is the state-of-the-art material.  It has the ability to release a certain amount of its oxygen and then in the reduced state it has the capability of splitting water and CO2.” 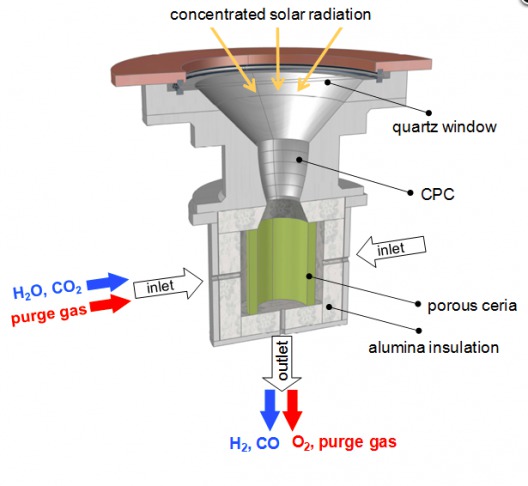 Furler adds, “In the first step, at 1500°C, we release a fraction of the oxygen contained in the material, thereby a pure stream of oxygen leaves the reactor as a valuable by-product,”

So far, only 700 liters of the syngas has been shipped from Zurich to Shell Global Solutions in the Netherlands, where application of the Fischer-Tropsch process turns the material into kerosene.

Furler has an optimistic view of where this could go.  “Our long-term vision, and what we are following, is that we will be extracting the CO2 from the atmosphere. This way, we are able to close the carbon cycle and produce CO2-neutral fuels. The technology is expensive, but commercially available.”  His researchers hope to triple the efficiency of the process to help bring costs down.

Because the concentration of sunlight takes the reflected energy of 3,000 times the power of the sun to reach the 1,500 degrees C required to turn the CO2, water and air into a usable fuel precursor, costs may not be competitive for a while. 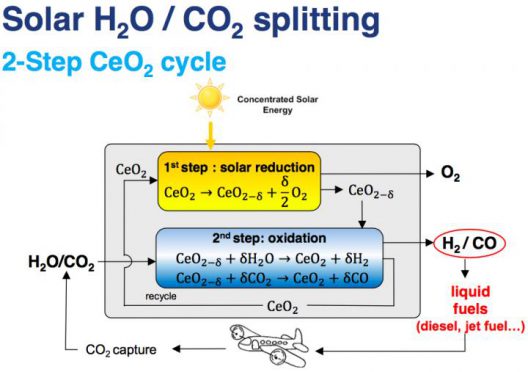 Again, Furler is optimistic.  “Oil is a limited resource; at some point you will run out.   What we propose is another route to the same chemical, using solar energy.”

The Sahara, where St. Exupery survived a forced landing and became inspired by the vast quiet to eventually write Wind, Sand and Stars and The Little Prince, could serve as a source for the sunlight needed to make the jet fuel for future flight.

Aldo Steinfeld, one of the ETH researchers says, “The long term goal is to reach a 15 percent efficiency with the solar-driven cyclic process.  20,000 liters [of] kerosene per day could then be produced in a solar tower system of one square kilometer.  The Sahara encompasses 8,600,000 square kilometers (3,320,000 square miles).

The results of the ETH team’s research is published in the November 18 edition of the Royal Society of Chemistry’s journal, Energy and Environmental Science.   Team members include Philipp Furler, Jonathan R. Scheffe, and Aldo Steinfeld.