Calin Gologan, founder and CEO of PC-Aero GmbH, has many electric and solar-assisted aircraft flying right now, and is responsible for the design the Aero Electric Aircraft Company’s SunFlyer training airplane, 20 of which have been ordered by Spartan Aeronautical University.  The initial Elektro One has flourished in a number of variants, including the SunFlyer, a two-seat, side-by side trainer developed with George Bye in Colorado.

Another variant of that original design, Solar Stratos is destined to combine record-setting altitudes with scientific research.  Its banner, “Manned Flight at the Edge of Space,” highlights the craft’s intended mission to reach 80,000 feet as its initial goal, a record that will be hard to beat.  Its mission is also a research venture, with Calin serving as Chief Technology Officer of SolarStratos. 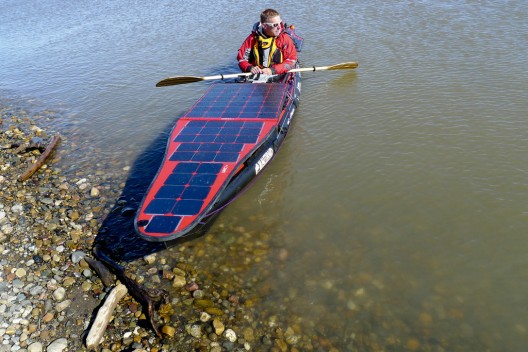 The initiator of SolarStratos, Raphaël Domjan, is now paddling his way through an Arctic Passage in one of two solar-powered kayaks, accompanied by Anne Quéméré, described as a Breton sailor.  Their three-month voyage will take them from the Pacific to the Atlantic Oceans.

Anne’s will be a “standard”, while that of Raphael will be equipped with photovoltaic panels to recharge the batteries and an electric propulsion system that will give the opportunity to sail for 50 kilometers without sun, at an average speed of kilometers per hour.  Each kayak can reach a top speed if 10 km/h (6.2 mph).

Domjan sailed around the world in the planet’s largest solar-powered yacht, Planet Solar.  That boat has just left its central display role at MEDCOP21, the Mediterranean Conference of Parties, or the Conference on Climate Change, and is has been donated to the Race for Water Foundation, a group dedicated to preserving water worldwide, and with which it will serve as clean platform for scientific research.

With all this solar-powered aquatic adventure in his resume, Domjan turned to Calin Gologan for a craft that would allow him to explore the limits of solar-powered flight.  One of Calin’s roles with Grob Aircraft was as development and approval engineer on the Grob Strato 2C and Egret-altitude aircraft.  The 2C was flown by Einar Enevoldson to an altitude record for propeller-driven aircraft of 60,700 feet, exceeding the official record by over 5,000 feet.

Now Calin works on the stratospheric ambitions of Domjan to take the SolarStratos to 75,000 feet or more, again on solar power.  Einar founded and heads the Perlan Project, which is nearly ready to begin testing of an 84-foot wingspan sailplane that will attempt to reach 90,000 feet on high mountain waves.

Calin has devised a 24-meter wing and a longer fuselage from the two-seat Record aircraft which PC-Aero also developed.  The structure takes advantage of the light weight and high strength of carbon fiber, with the raw fuselage weighing 14 kilograms (30.8 pounds).  Calin, who likes to show a picture of him holding the fuselage above his head with one hand, reported to EAS IX attendees that the fuselage molds were ready as of his May 1 speech, and the solar wing test platform was ready for further work.

The airplane will carry two “big” pilots in tandem and 30 kilowatt-hours of batteries.  With the entire craft weighing only 200 kilograms (440 pounds) empty and 450 kilograms (990 pounds) loaded, the HPD-25D dual motor (32 kilowatts/43 horsepower) will be able to loft the efficient airframe to its goal altitude in about an hour, according to Calin.   The motor contributes a mere nine kilograms (19.8 pounds) to the airplane and Calin notes that the dual motor controllers are each the size of a deck of cards, enhancing the craft’s light weight. 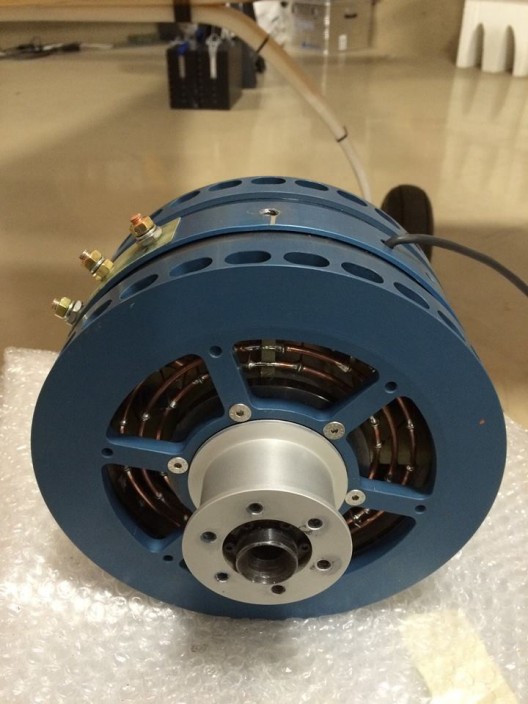 An onboard power supply of 200 Watts will keep instruments and radios operational and power oxygen supplies and possibly help maintain pressurization for pilots’ suits.

The craft’s aspect ratio of more than 20 and a glide ratio greater than 40 to 1, coupled with the motor’s better than 90-percent efficiency, should bode well for record attempts.  It also means the battery pack will return to earth fully charged, the solar cells on the long wings recharging the batteries on the long descent.

SolarStratos will deal with aeromedical issues, its unpressurized cockpit requiring some form of spacesuit for protect occupants, and flights may expose flyers to radiation at altitude.  This will doubtless add to the sense of adventure for space tourists who want a trip to the edge of space.  The airplane can accommodate manned and unmanned payloads, and for stratospheric tourism, provide one of the least expensive ways to reach such altitudes.

By contrast, the Perlan II weighs nearly double the SolarStratos, but has a pressurized cabin that will keep the passengers breathing, but not necessarily warm.

Calin Gologan left the audience delighted and dazzled with the variety of challenges he has confronted, and so far, conquered.  Let’s keep our hopes up for a successful high-altitude conquest.