Light Sport Aircraft (LSA), alas, haven’t lived up to their early hype, 100 manufacturers selling only 235 units in the United States last year.  That bothers Chip Erwin, who would like a Personal Sport Aircraft (PSA) option.  He’s working through his company, Aeromarine LSA, to do something about that.

Chip explains that high prices for LSAs, brought on by doubling Rotax prices over the last decade and quadrupling of once cheap European labor rates, has put what were to be $50,000 airplanes into the $150,000 price range, barely able to compete with used Cessnas and Pipers. 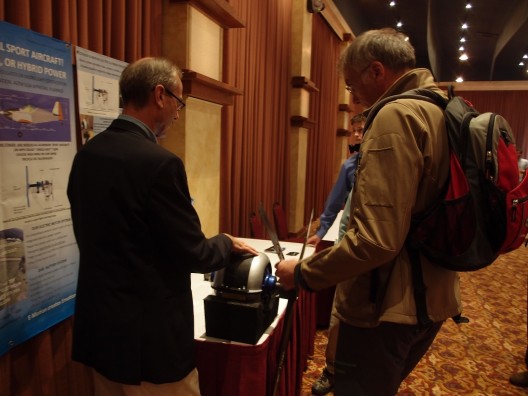 Having demonstrated two-stroke engines and an Electravia motor on his imported Zigolo ultralight glider, he has displayed an alternative motor designed by Don Lineback, first at last year’s AirVenture as a mockup, then as an operating prototype at the ninth Annual Electric Aircraft Symposium in May.

Now he’s displaying it at AirVenture 2015, complete with an e-Prop four-blade, asymmetric propeller reputed to cut noise.  His video of a back-yard run-up shows that the 25-pound motor can double as a leaf blower.  Chip told attendees at his presentation in May that the motor could theoretically put out up to 75 horsepower, sufficient to make this motor useful not only in Chip’s PSAs but also in Light Sport Aircraft (LSAs).

Along with the motor, a buyer will get a controller, battery management system (BMS) and battery pack, all for around $11,000.  The batteries themselves are unique, with carbon fiber outer tubes protecting the active ingredients.  Individual tubes can be connected in different arrays using special end connectors, allowing them to be configured to fit neatly into spaces available in an airframe. 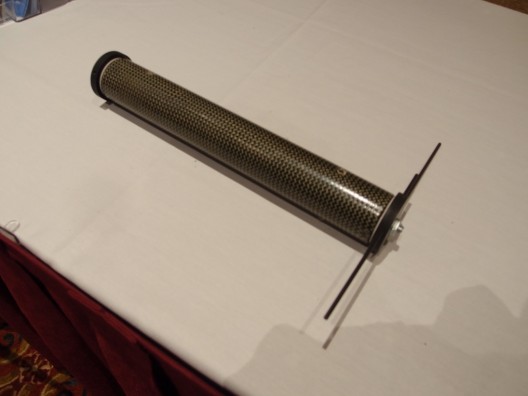 Cells in Chip Erwin’s battery packs also have unique look. Tubes can be connected in series and parallel with end connectors, configured into any end-wise shapes

Don Lineback designed the motor for high torque and low speed, so propeller speed reduction drives are not necessary.  Chip reports,”I will say that our goals of very high torque at very low RPMs look to have been met. Max RPM of 1,700 with an optimized RPM of 1,200 means the prop noise at cruise will be similar to the motor noise, which is almost nothing at 150 feet.”

He explains the high torque will allow “a whisper-quiet cruise of 900 RPM on the Zigolo.”  Not only will that keep the neighbors happy, but allow the Zigolo to cut back on the number of battery tubes it carries and stay within ultralight Part 103 weight limits.

The Zigolo makes a good test bed for the motor, with its landing speed of around 26 mph and an ability to “loiter” at 46, a nice speed for quiet, breeze-in-your-face cruising. 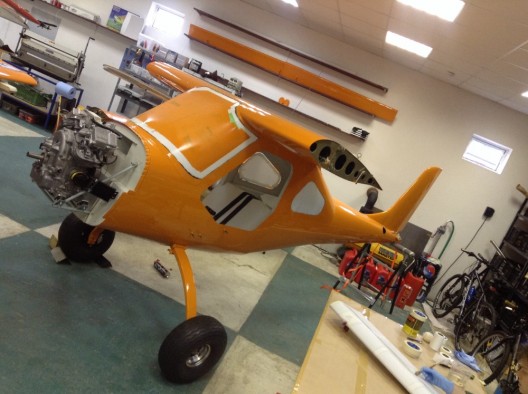 E/G with two-cylinder, four-stroke engine. A more powerful unit is on its way, rumored to be from famed Weslake firm

While Part 103 puts weight and performance limits on American flyers, Europe has adopted broader rules. The United Kingdom developed an SSDR (Single-Seater De-Regulated) class,  which allows airplanes up to 660 pounds (300 kilograms) and higher speeds than allowed under U. S. ultralight rules.  SSDR allows pilots to avoid medicals, an added benefit.  Europe in general has fewer restrictions on single-seat recreational craft.

Chip sees his new range of aircraft, from the Part 103-compliant Zigolo, an Italian rendering of Mike Sandlin’s Goat ultralight glider, to a high-wing E/G Plane and a low-wing Stinger.  With a gasoline two-stroke engine, the Zigolo comes in at under $12,000 in kit form, $16,000 in almost-ready-to-fly form and with electric power, around $20,000.

The E/G Merlin will cost around $35,000 ready to go, and the Stinger will not be over $42,000 if Chip’s estimates he shared during his dinner presentation at EAS IX are still viable.  From his web site, it looks like the range he’s trying to achieve, somewhere in loaded Goldwing motorcycle territory. 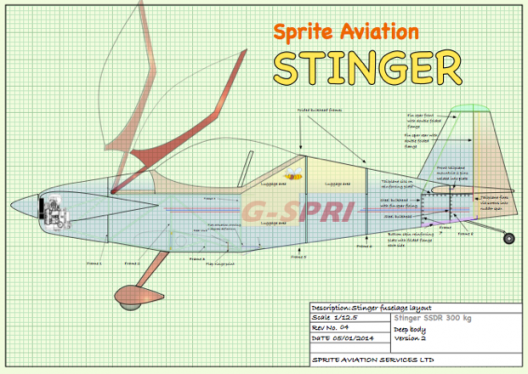 He has nice plans for the near future, including amphibious floats that allow the E/G to remain under 800 pounds even with a ballistic parachute.  He wowed dinner guests with the idea that he would be able to produce a single-seat, electric amphibious craft that would open up the Personal Sport Aircraft market in new and exciting ways.

See his web site for the logic behind PSAs.  Chip makes a compelling argument for this new direction in aviation.