David Calley is  member of the CAFE Foundation Advisory Board, with a great deal of technical expertise to offer.  His small wind turbine sold over 150,000 units.  His patented design for the TrailerTail® increases fuel economy on semi-trucks and trailers by 5.4 percent at 65 miles per hour, according to SAE tests.  Last year at EAS VIII, he showed the potential for small motors with incredible torque that could power Sky Taxis.

At this year’s EAS IX he described, in depth, the type of motor design he has been developing to power things like his three-wheel electric/pedal-powered commuter vehicle and landing-gear wheels on Sky Taxis and even rocket fuel pumps.

He asked the not-too-rhetorical questions, “How high can electric motor power go?” and “Where do these forces come from?”  His answers took attendees on a high-level look at electromagnetic and permanent magnet (PM) materials theories. 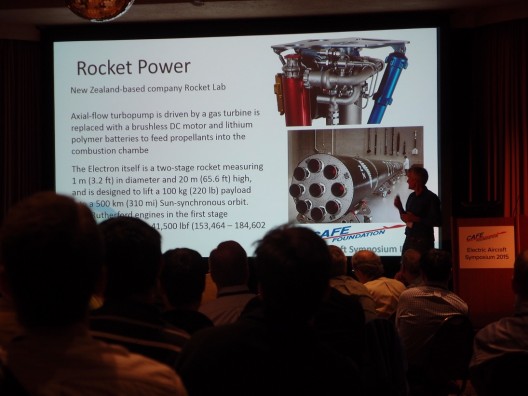 Electric motors rely on interactions between fields to produce power.  “Fields” in this case are an electric field viewed from a different angle, an everyday example of special relativity, according to David.

His brief explanation, paraphased lightly here, is that in fields with motion relative to a conductor such as copper, the moving charge sees length contraction due to apparent velocity changes between free electrons versus fixed positive metal ions, causing a force due to the charge.  To the stationary observer it is what we call a magnetic field.  This caused a mild discomfiture to your editor until he sorted out the idea that what we see as a motor turning a few hundred or thousand revolutions per minute is actually being motivated by electrons flowing at the speed of light.  All the ideas Einstein expressed as special relativity become very real along the moving and stationary parts of the motor. 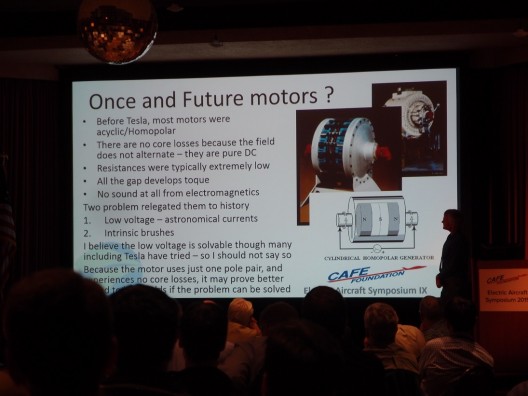 See here for a better explanation of special relativity as it functions in motors.

This diversion into Einsteinian physics leads to an attempt to define, or at least understand, what the term Tesla means as applied to magnetic force.  Rare earth neodymium magnets, for instance, rate at about 1.3 Tesla (T), while iron saturates at around 2 Tesla.  MRI (magnetic resonance imaging) machines range from 1.5 – 3 T for hospital and clinic models to up to 8 for research machines.  Super conduction fields hit 35 to 40 T, and explosive fields in laboratories have reached 2,800 T.  Taking the idea even further out, magnetars, a form of neutron star, have Tesla values in the trillions.  By contrast, a typical refrigerator magnet registers a puny 5 milli-Tesla, but enough to hold your kid’s artwork for your gaze.

Magnetars are a very dense neutron star about 12 miles in diameter with a greater mass than our sun, a thimble full of magnetar weighing about 100 million tons.

According to Space.com, “Get too close to one (say, within 1,000 kilometers, or about 600 miles), and the magnetic fields are strong enough to upset not just your bioelectricity — rendering your nerve impulses hilariously useless — but your very molecular structure. In a magnetar’s field, you just kind of … dissolve.”  The magnetism is too extraordinary for practical use, in other words.

Trying to develop a powerful, light motor requires intelligent materials selection and arranging these materials into a topology that gets the most from them.  David ran through a shopping list of magnetic materials and how they might act in a moving field.

A motor developer has a full kit from which to select, with ferromagnetic materials attracted to magnetic fields, diamagnetic components opposed to an applied field, and most contrary of all, antiferromagnetic objects in which magnetic domains cancel one another, adjacent ions pointing away from each other and cancelling any magnetic attraction to the material.  Paramagnetic materials take on the magnetic fields around them, but lose it when moved away from the field.  A reasonable overview of these materials and their properties can be found in this abstract. 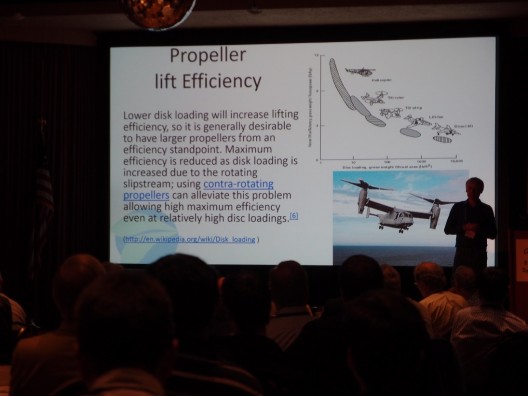 One type of paramagnetic material, if your editor is making the right association, 64 MgO (magnesium oxide) is a soft magnetic material through which magnetic fields travel more easily than through other, harder materials.  Combined with specially-selected composite materials, these types of compounds offer specific properties that lead to high-output, high-torque motors capable of turning large helicopter blades at low speeds with high lift capabilities.  The poor man’s (or woman’s) VR-22 Osprey could be an outcome here.  The same technology applied to aircraft-sized wheel motors could accelerate a Sky Taxi to takeoff velocity quickly and efficiently. 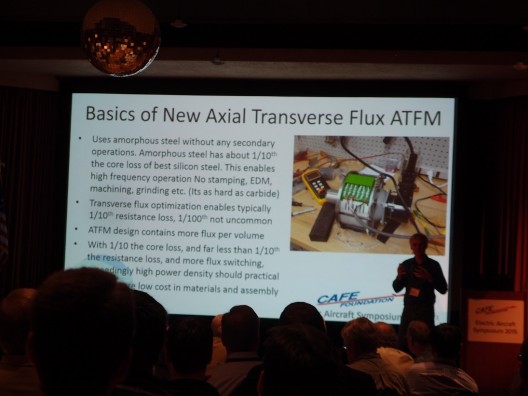 David’s new axial transverse flux motor (ATFM) might overcome the constraints that axial or transverse flux motors have in themselves.  His new topology and choice of materials was first applied on a robot assembly line, where the torque necessary for successful operation needed to be packaged in a motor 1/100th the size of the original unit.  Compact combinations such as David Calley’s motor might combine the high starting torque of axial-flux machines with the high speed capabilities of transverse flux units.

Nikolai Tesla designed a motor with some of these characteristics over 100 years ago.  We may have forgotten its origins, but David Calley is applying those lessons to his hybrid pedal electric bike drive application.  We hope to see this and other ideas coming to fruition soon.