Dr. Yi Cui’s presentation title ended with, “from Fundamental Science to Commercialization,” an indication of the long, tough road that new developments are forced to take.  Considering that Sony introduced the Lithium battery as a commercial entity in 1991 (and that following at least an 18-year slog from laboratory to mass production), mostly incremental changes have come for the chemistry, echoing Dr. Cui’s pronouncement at EAS III that lithium batteries followed a “growth curve” of about eight percent per year, meaning that about every nine years, they should double in performance. 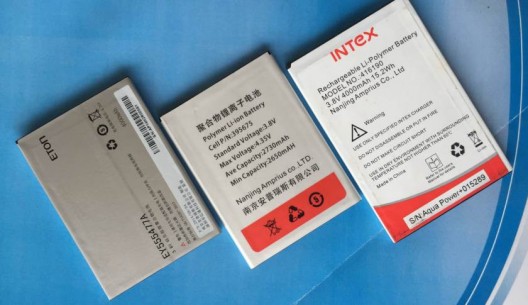 Amprius batteries designed in America, made in China

Cui’s estimate has been borne out in reality, Nature magazine reporting in 2014, “Modern Li-ion batteries hold more than twice as much energy by weight as the first commercial versions sold by Sony in 1991 — and are ten times cheaper. But they are nearing their limit. Most researchers think that improvements to Li-ion cells can squeeze in at most 30% more energy by weight.”

Cui spoke of attempting to reach five times the energy integration of current cells, and asked how much energy can we integrate in a given weight and volume?

Beyond the CAFE Foundation’s interest in such breakthroughs to help promote electric vehicles, especially aircraft, Dr. Cui discussed integration of energy storage into the electrical grid, “one of the greatest inventions in human history.”  He talked about using hydrogen as a host for ions in such energy storage, and that host materials could be stable or unstable.  Stable hosts would not move in charge/discharge cycles, and would hold volume changes to less than 10 percent. 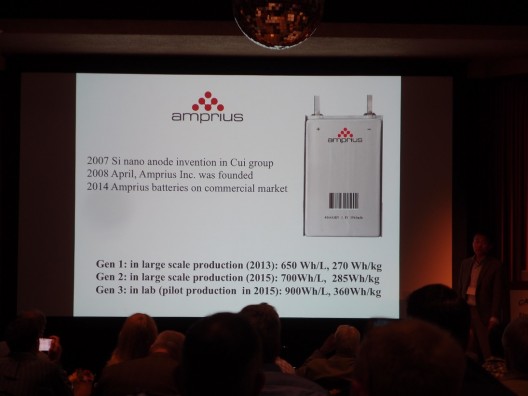 Where Amprius batteries are headed, according to Dr. Cui’s EAS IX presentation

Possibly because lithium represents only three percent of the cost of a battery, Cui has turned to other elements of cell construction, and explored nano materials, including nanocrystals, nanotubes, graphene, nanowires and the use of nanokinks that develop in such wires, and that can be exploited to gain even more energy from the materials and reduce overall battery costs.

Those materials work well to produce more potent anodes and cathodes, the negative and positive electrodes in a battery.  But Cui, and his company Amprius, are investigating the advantages of a solid electrolyte interphase (SEI) in batteries.  Several companies are investigating solid electrolytes because they add a level of safety to batteries.  It’s the leaking liquid electrolyte that seems to be responsible for the majority of battery fires, so designing it out of cells will lead to a much safer energy source. 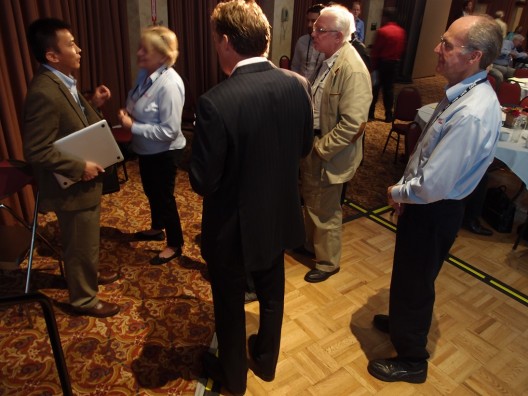 One of the rock stars of EAS gatherings, Dr. Cui responds to questions

According to the Webb Group at the University of Texas at Austin, SEIs can have good or bad effects on battery performance, the “good” ones forming a compact, stable, ionically conducting layer around the electrodes, and the “bad” ones creating an unstable, ionically non-conducting layer that destroys the battery internally.  This is but one of many choices and directions that developers have to choose, and typical of the many frustrations that stand in the way of easy battery progress.

Cui discussed nanospheres that help protect the electrodes in the battery.  A Stanford report helps explain their nano size and grand importance.

“The Stanford team’s nanosphere layer resembles a honeycomb: it creates a flexible, uniform and non-reactive film that protects the unstable lithium from the drawbacks that have made it such a challenge. The carbon nanosphere wall is just 20 nanometers thick. It would take 5,000 layers stacked one atop another to equal the width of a single human hair.

“’The ideal protective layer for a lithium metal anode needs to be chemically stable to protect against the chemical reactions with the electrolyte and mechanically strong to withstand the expansion of the lithium during charge,’ said Cui, who is a member of the Stanford Institute for Materials and Energy Sciences at SLAC National Accelerator Laboratory.”

Another challenge battery developers have faced and which Cui, Stanford and Amprius are addressing is the formation of dendrites, little spikes that grow and on electrodes and eventually pierce that battery separator that keep things from shorting out within the battery.  Dr. Cui and his team have created “smart” separators for battery safety, one of which is a polymer coated with copper that alerts before the battery reaches a point at which thermal runaway might become a problem.  Variations on this help prevent such piercings.

If anything points to a successful outcome for Dr. Cui and Amprius, it is the list of prominent citizens and institutions investing in the company, including Trident Capital, VantagePoint Capital Partners, IPV Capital, Kleiner Perkins Caufield & Byers, SAIF Partners, Chinergy Capital, Google Chairman Eric Schmidt, and Stanford University.

Because the successful outcome of the firm’s work will give us lighter, more energy dense, less expensive batteries, the CAFE Foundation can only wish Amprius well.