Pete Lynn delivered a talk at the 2015 Electric Aircraft Symposium on tethered wing aircraft that could provide long-range transport for large-scale cargo (Pete envisions shipping containers) and VTOL operation – electric flying trucks.  He works at Otherlab, a wildly inventive operation at the historic Schoenstein Organ Factory, identified as San Francisco Landmark #99 and located in the Inner Mission District.  The group works with extremes of technology and design, “attracting research funding for early and risky ideas in areas such as ‘programmable matter’, robotics, solar energy, wind energy, energy storage, computational and advanced manufacturing, medical devices and more. These non-dilutive investments allow us de-risk the very early exploratory phase of our projects.”

Pete cautions, however, that despite his work on things like pneumatic robots for Otherlab, the ideas expressed at EAS IX are his own and not necessarily those of his employer. 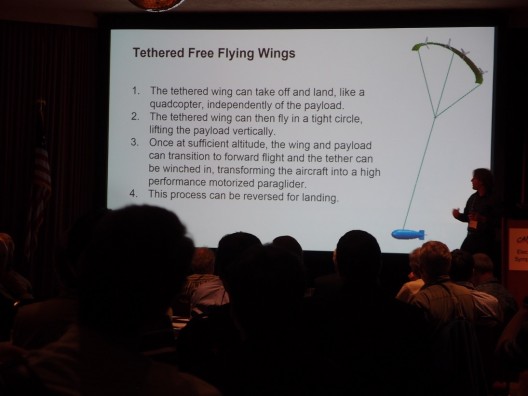 Pete Lynn’s tethered wing aircraft would function like a large paramotor, but with the motors on the wing, rather than in the payload

The system trades top speed for extremely light weight in the lifting structure.  This allows hoisting a weight much greater than that of the aircraft.  For comparison, consider the powered parachute, in which the “wing” weighs perhaps a few pounds, but lifts a substantial pilot and powerplant.

”The tethered wing aircraft concept separates the main lifting wing and the payload, connecting them via a tether. This allows the wing to fly independently of the payload, and thereby facilitates vertical takeoff and landing by allowing the wing to circle overhead and lift the payload vertically. Once significant altitude is obtained the circling wing and payload can transition to forward flight, effectively becoming a very high performance rigid wing powered paraglider. The wing itself might have multiple electric propellers and sufficient thrust to vertically take off and land itself independently of the main payload. With wing lift distributed in tension, the wing need only mass a few percent of the total aircraft weight, enabling much greater efficiency and range. The far lower aircraft weight also reduces scale limitations making much larger aircraft possible. Combined with high flight rates, ton-mile costs comparable to trucks appear possible, but at much greater speeds, and with road independence.” 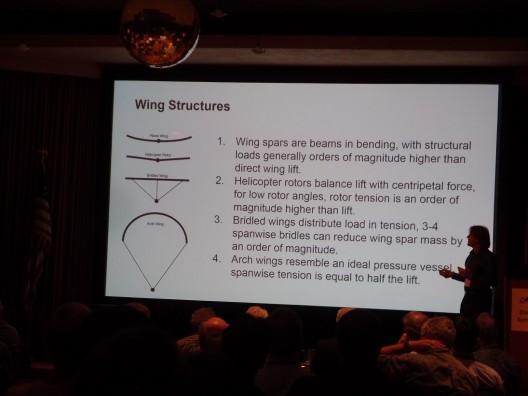 Similar to Nate Saint’s jungle missionary aviation tethers, in which a Piper Cub would circle tightly over a clearing in the forest, lower a basket with supplies until it touched the ground, or pick up a light payload in the bucket and circle while raising it to the airplane, Pete Lynn’s tethered wing parasail replaces the Cub with a powered parachute.  Rather than have the powerplant on the payload, as it is on a paramotor, the motor or motors will be on the leading edge of the very large powered parachute, pulling it vertically to the literal end of its tether, then transitioning to horizontal, circling flight to pull the payload skyward.

In an email to your editor, Pete explains, “The primary vehicle type that I was discussing was the tethered wing system, where a tethered wing with VTOL takes off vertically and transitions to forward circling flight above the main payload, vertically lifting the payload into the air. So both the wing and the total system (wing, tether and payload) can independently do VTOL. This one is for the flying truck market – for carrying shipping containers, so to speak.”  The thought of a shipping container flying overhead might at least initially relegate such vertical lifts to logging operations, or transport across small bodies of water or desert areas.

He also showed ideas for smaller, “generic high-speed VTOL electric aircraft,” designed around what Pete considers as an optimum speed for electric aircraft at around 150 meters per second (335 mph!), considerably higher than what most designers seem to aim for or accomplish in this realm. 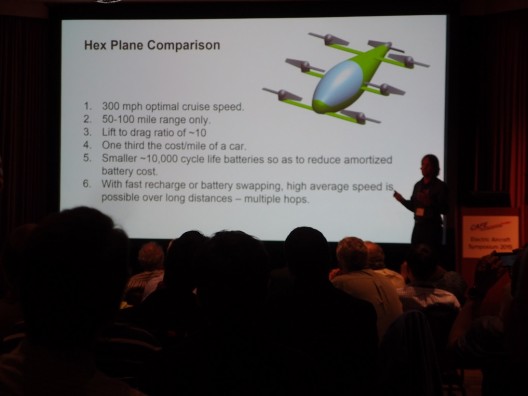 He defends the idea as minimizing “amortized battery and vehicle cost, electricity cost being almost in the noise for lower speed craft. I think most developers are sort of making a mistake in developing lower speed aircraft (range matters little for electric aircraft that can land most anywhere on demand), as they are more expensive per mile. Fast shorter range aircraft are smaller with smaller batteries, and lower cost per mile. When greater range is desired, use multiple hops.”

He sent an email clarifying the idea of cost and “noise” involved in his design.  We include them here because they are simultaneously informative and challenging.

“The electricity cost in the noise argument is simply that the cost of filling an aircraft up with electricity is very small compared to the general hourly cost of flying. For example, a Tesla costs around $10 to fill up, and uses maybe $2 of electricity an hour. The hourly cost of operating the vehicle is much higher than this. 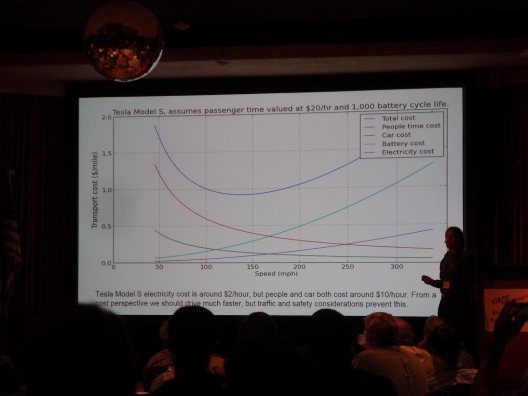 Pete Linn breaks down the true cost of Tesla ownership

“Even the battery cost is much higher than this, for example, assuming a Tesla battery replacement:

“$12,000/85 kWhrs / 500 cycle life = $0.28/kWhr for the battery alone, which is around three times the cost of the electricity that goes into it. Hence the desire for higher cycle life batteries and markets that enable multiple charge cycles per day – so as to get ‘amortized’ battery costs down.

“A small high speed short range aircraft will have a much smaller battery than a Tesla, and the cost of filling it up will only be a few dollars. The cost of operating the aircraft is much higher than this, hence using more electricity to fly faster, covering more miles per hour of use, actually reduces overall per mile operating costs.

Electric vehicles, including aircraft, will need the benefits of lower battery prices and longer battery life to become totally competitive economically.  This is happening, fortunately.

Pete Lynn’s economic and performance thinking comes from a new outlook on these matters, and may make many ponder that outlook, but it also comes from someone who is helping design a very different future.