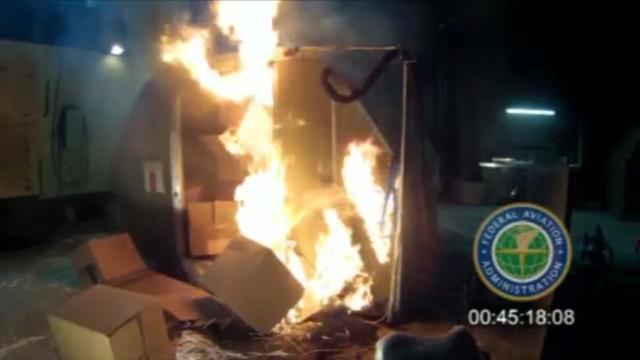 Recent news from the world of insurance claims adjustors brings us back to ways inspired battery designers might reduce or eliminate certain types of claims, and make electric flight safer. Even when international agreements don’t make progress along those lines.

With recent news of Federal Aviation Administration interest in lithium-ion batteries arising from fires caused by thermal runaways, shipments of large numbers of batteries may be banned.  Claims Journal, an insurance industry news line, quotes Angela Stubblefied, an FAA hazardous materials safety official, as saying, “’We believe the risk is immediate and urgent.’ She cited research showing the batteries can cause explosions and fires capable of destroying a plane.

“FAA tests show that even a small number of overheating batteries emit gases that can cause explosions and fires that can’t be prevented by current fire suppression systems. Airlines flying to and from the U.S. that accept lithium battery shipments carry 26 million passengers a year, Stubblefield said.”

This led to the U. S. to craft rules to be implemented in 2016 that will restrict shipments of lithium batteries, especially on passenger craft.   The International Civil Aviation Organization (ICAO) held a Dangerous Goods Panel meeting in Montreal from October 19 through October 30, with much consideration of shipping lithium batteries. Several organizations with different agendas meant only preliminary rulings were possible, with the majority of the panel recommending Li-ion batteries be shipped at no more than a 30-percent state of charge and limiting shipments of batteries to one specially-prepared package per aircraft.

Based on FAA tests that indication that Halon, the fire suppression agent used in passenger aircraft cargo compartments “may not be capable of suppressing a fire involving large quantities of lithium-ion cells,” Boeing and Airbus have recommended not hauling such batteries as cargo “until safer methods of transport are established.” 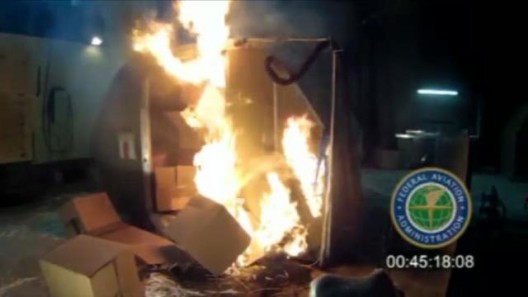 Citing safety concerns, United Airlines on Monday, March, 2, 2015, became the second major U.S. airline to announce it will no longer accept bulk shipments of rechargeable batteries of the kind that power everything from smartphones to laptops to power tools. (AP Photo/FAA, File)

This recommendation may be moot, however, since “Congress has prohibited the FAA from acting on its own to bar the shipments to the U. S.  A 2012 law says the government can’t issue regulations related to lithium-ion battery shipments that are more stringent than ICAO regulations unless accident investigators can show that a plane was destroyed by a fire started by the batteries.”  Hard to do when the evidence is destroyed by the fire batteries might have started.  Although the IATA and ICAO support continued shipments, the International Federation of Air Line Pilots Association advocated a ban “until better packaging or other measures can be developed to reduce the risk.”

Since gaining international and organizational agreement on rules and safe handling practices seems to have some impediments, an engineering approach may help resolve at least some concerns.

Eric Darcy, NASA’s battery expert, has spoken at several Electric Aircraft Symposiums, detailing steps he developed in making and evaluating batteries that will be as intrinsically safe as possible.   His work with NASA has established his reputation as a battery guru, with work on spaceship and spacesuit battery packs, where failure is definitely not an option. 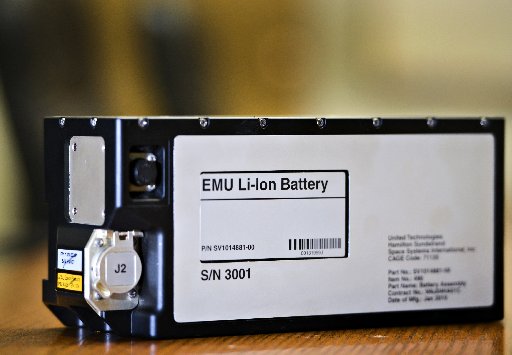 Extra-vehicular mobility unit battery, where failure is not an option

Eric’s presentation at this year’s Electric Aircraft Symposium gave an overview on how he developed means of preventing internal short circuits and spreading of overheating condition from one cell to others.  He’s been sharing these insights with Matthew Keyser and Ahmad Pesaran, researchers at the National Renewable Energy Laboratory as they worked on a means to test cells for internal short circuits, deliberately triggering them to find out how to avoid such hazards.

They found that they could devise means to prevent internal or cell-to-cell propagation.  The latter can lead to thermal runaways that affect the entire battery pack, so need to be avoided at all costs.  Darcy found there is a need to space out cells to prevent such propagation, venting gases as quickly as possible and using mica sleeves in their setup to isolate gases.  He used another machinable glass ceramic, Macor®, which can be machined like plastics.  Such separators seem to insulate even in high temperatures.

Aluminum heat spreaders can diffuse heat to larger, and thus cooler, areas through control of the conduction path.  To help fire off things in controlled experiments, multiple triggers may be used to create an overcharge and explosive type failure, another reason to contain such events, whether intended or not, in structural foam to prevent side-wall blowouts.  That might lead to a 10 to 15 percent battery volume in the complete package, but good use of the precautionary principle, nonetheless.

In past work for NASA, Dr. Darcy has tested ways to instigate and prevent internal short circuits, working to make extra-vehicular assemblies (space suits) from having thermal runaways, nothing the average space-man or –woman would want to experience.  Part of Darcy’s approach is controlling manufacturing defects to a level beyond six sigma.  The 54 batteries in the EVA are made to incredibly tight specifications, then tested and matched to nearly identical characteristics.  The battery pack, according to what Darcy shared at lunch two years ago, is that the EVA pack does not rely on a battery management system for control.  Such processes are incredibly expensive and would make Nissan’s Leaf a luxury car.

NREL Senior Engineer Mathew Keyser holds a sheet of copper discs, one of the metal components that comprise the NREL Internal Short Circuit(ISC) device, capable of emulating latent defects that can cause escalating temperatures in lithium ion batteries and lead to thermal runaway. Industry can use the NREL ISC device to evaluate solutions intended to address this issue. Photo by Ellen Jaskol, NREL

According to NREL, their emulation tool will help manufacturers ensure the safety and reliability of electric vehicle batteries and avoid unexpected failure mechanisms.  Dormant flaws in these batteries present cause for concern, since many failures after batteries have gone one for weeks or months with no apparent concerns.

A key result, according to NREL, is their “internal short device can be used to determine how specific changes to battery materials and design will affect safety and evaluate how a battery will react to a latent defect…  An emulation method was sorely needed to definitively pinpoint the cause of internal short circuits, prevent failures, mitigate their effects, ensure consumer safety—and, ultimately, put more electrified vehicles on the road.”  And, presumably, more electric aircraft in the air.