Jean-Luc Soullier, holder of Fédération Aéronautique Internationale records for speed and altitude in an aircraft almost lighter than its pilot, has a greater series of ambitions to expand the range and speed of electric aircraft.

Having stretched the limits of his Colomban MC-30e with two different motors, he’s looking at a longer-spanned, cleaner aircraft – the Windward Performance Duckhawk – as a means of getting higher speed and much longer range for a truly formidable (tres formidable) crossing of the Atlantic Ocean, not once, but twice. 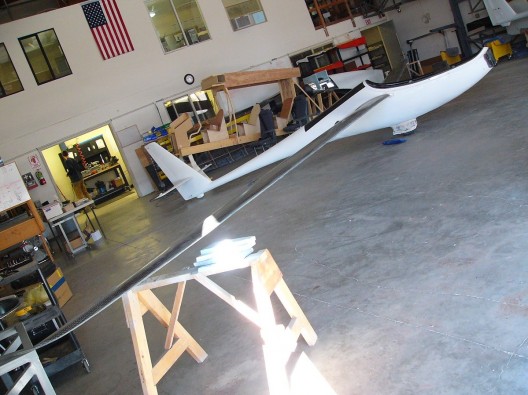 The airplane, with a Rotex motor on the nose and a specially-designed Arplast three-bladed propeller, will weigh a mere 105 kilograms (231 pounds) empty – without batteries. This is considerably less than the lightest Duckhawk in standard form, and shows that designer Greg Cole and Jean-Luc are making room for the added weight of long-range energy storage.  Since the original airplane manages +7.5/-5 g’s, the lighter version will be restricted to a never-exceed velocity of 180 kilometers per hour (111.6 mph), lower than the heavier dynamic-soaring-capable sailplane can attain. The competition Duckhawk, by comparison, can fly in smooth air with a Vne of 200 knots (230 mph) and has a maneuvering limit of 160 knots (184 mph). 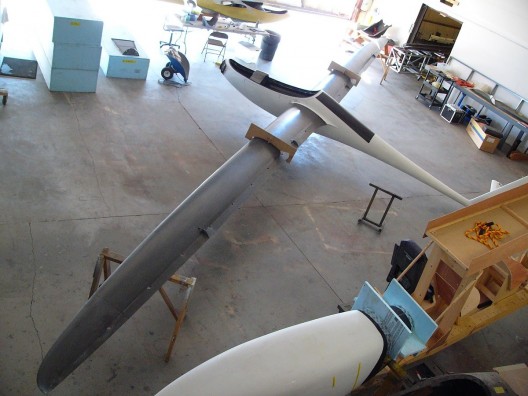 At the eighth annual Electric Aircraft Symposium in April, he explained how he and his business partner Roman Marcinowski had developed the Etlantic program to field a high-performance sailplane with a 15 kilowatt (20.1 horsepower) powerplant, batteries in the wings and 10 square meters (107 square feet) of solar panels collecting energy to supplement the range of the batteries.  Because the Duckhawk has only 80 square feet of wing surface, solar cells will probably also be distributed on tail and upper fuselage areas, although this is not shown on the conceptual sketch.

The first of the two Atlantic crossings, starting from the Paris Air Show in July, 2015 will be powered by secondary, or rechargeable batteries.  Stops in Iceland, Greenland and Newfoundland will accommodate charging before Jean-Luc presses on to that year’s AirVenture in Oshkosh, Wisconsin.  The high-energy cells will provide up to 2,200 kilometers (1,364 miles) range with the help of the solar cells.  Jean-Luc talked about flying a low-high-low mission to gain further assistance from prevailing and jet stream winds. 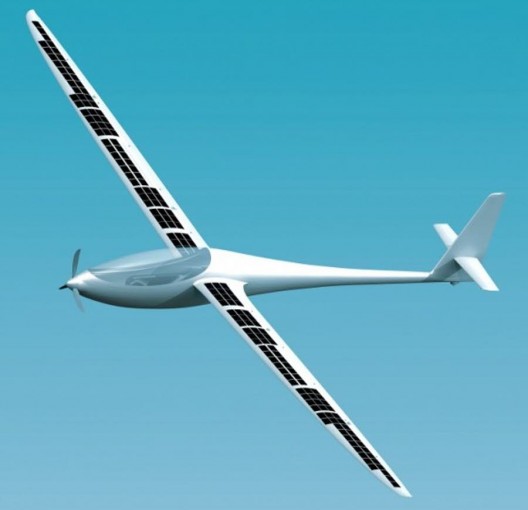 At 200 kilometers per hour (124 mph) true air speed, Jean-Luc calculates the airplane will require the full 16 kilowatts the motor can provide, but dropping back to 120 kph (75 mph) requires only 5 kW.  Monitoring energy usage and comparing that to true air speed will enable appropriate modulation of current draw.  Chasing the most helpful winds will test navigation and piloting skills.

With a survival suit (in case of a letdown into the cold northern waters) and a ballistic parachute (in case of aircraft issues), Jean-Luc will rely on GPS tracking and the support of a great many people to assure a quick retrieval in case of problems.

Retracing Lindbergh’s flight, Etlantic’s New York City to Paris flight, planned for 2016, would be a non-stop crossing of 6,600 kilometers (4,092 miles), a true test of how far the technology can take us in the next few years.  The flight will use primary, non-rechargeable cells with extremely high energy density.  An epic flight on such low power seems the truest of David and Goliath confrontations.

All flights will have navigation and flight data recording from MGL and drag reduction via the use of Dr. Sinha’s deturbulator tape.  Jean-Luc considers that they played a part in helping the team achieve FAI records in the Colomban MC-30e Luciole (Firefly).

With the Duckhawk making its way from Windward Performance’s Bend, Oregon home to its new hangar in Puy-de-Dôme, France, we will see the thoughtful solutions Jean-Luc and Roman find for dealing with the daunting challenges they face.