Although “large nanostructures” may sound like the same kind of oxymoron as “jumbo shrimp,” such things are relative even at the smallest of scales.

Dr. Avetik Haryutunyan, Chief Scientist in the Materials Science Division of Honda Motors in Columbus, Ohio, shared a small part of the knowledge contained in his numerous publications and patents with the audience at the eighth annual Electric Aircraft Symposium last April.  He reviewed experimental approaches to creating high lithium storage in carbon nanostructures, with the ideal of providing scientists and commercial developers usable materials and products. 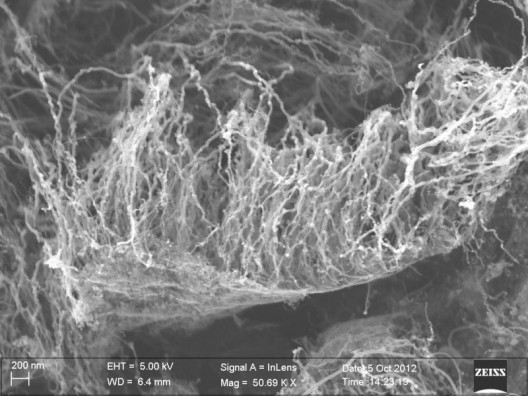 Rice University and the Honda Research Institute use single-layer graphene to grow forests of nanotubes on virtually anything. The image shows freestanding carbon nanotubes on graphene that has been lifted off of a quartz substrate. One hybrid material created by the labs combines three allotropes of carbon – graphene, nanotubes and diamond – into a superior material for thermal management – one of many research avenues followed by Dr. Haryunyan: Photo from Science Daily

He reviewed the many experimental approaches to enhancing energy storage with lithium, attempting to achieve reproducibility and irreversibility, two touchstones of scientific validation.

Dr. Haryutunyan explained that with 14 Terawatts of energy consumption in the United States today and an anticipated requirement for 30 to 60 terawatts by 2050, we would have to build one or two nuclear plants every day for the next several decades to meet the need.   Whether we get energy from nuclear, wind or solar, we’ll still need to store that energy for portable devices and electric vehicles.  This will require light, multifunctional materials to reduce the weight and improve the efficiency of future batteries.

He discussed the long history of energy storage, including the controversial and possibly mistakenly named” Baghdad battery,” which may never have stored a single electron, but which could remotely have been used as a battery.  An iron rod in a copper sheet, immersed in an acidic solution such as vinegar of lemon juice, will generate a current flow, but whether people in what is now Iraq knew that 2,000 years before the common era is open to speculation.

Graphite has long been a common material for batteries, with its theoretical maximum energy density of 880 Watt hours per kilogram, although that is actually lower in practice.  It allows storage of only one lithium atom for every six carbon atoms, limiting a battery configured this way to a capacity of only 372 Amp-hours per kilogram, certainly nothing to get excited about.

Nantechnology has allowed researchers to tune material to get something new.  Professor Richard Smalley pioneered research at the nanoscaale, and following his death, left the Smalley Institute at Rice University, focused on 5 Grand Challenges: energy, water, environment, disease, and education. Dr. Haryutunyan focuses, of course, on energy, although many of his researches impinge on medical areas, with materials he helps develop having diagnostic and healing potential.

Carbon nanotubes (CNTs) have much higher energy storage capabilities than ordinary carbon – up to 1,116 mA/g with randomly disordered material.  These tubes, essentially rolled-up graphene sheets, have more space to absorb lithium.  But the binding of lithium sometimes forms clusters which mitigate against high energy storage.  This has led to forming graphene not only into nanotubes, but nanotube yarns and cables, looking like spaghetti or forests made of these tubes.

All these are attempts to provide more space to absorb more lithium and gain more storage capacity.  A variety of approaches have been tried, including single and multi-wall nanotubes, graphene flakes and graphene networks grown on nickel foam.  These sometimes lead to problems with retaining the capacity of the material, with rapid losses after the first and second full charge/discharge cycle.

To gather and gain useful “work” from a significant number of lithium ions, nanoscale materials can use a variety of specific defects to increase energy and prevent lithium clusters.  These specific defects are hard to reproduce, and a great deal of research is necessary, apparently, to make the sometimes excellent results Dr. Haryutunyan and his teams achieve into a normal outcome for everyone who wants similar products.

The teams are attempting to use boron in place of carbon, and realizing that silicon can absorb more lithium ions than graphite, are looking toward that material for further gains.  Science at this specific and focused a  level does not readily lend itself to front page news stories, but is essential to making the scientific and commercial breakthroughs that we see in the popular press a reality.