Bruno Mombrinie, a director for the CAFE Foundation, and Dr. Brien Seeley, founder and President of the organization, gave a one-two presentation on pocket airports and Sky Taxis that examined the practical and operational facets of such a program, first described in detail in a joint NASA/CAFE Foundation document.

According to Bruno’s CAFE biography, “As a freshman, he helped build MIT’s Chrysalis human powered airplane. Later that summer he got to fly the plane several times. ‘The feeling of being so, so high (39ft)…to fly under my own power was beyond…I just wanted to burst…actually I was so out of breath from the effort, I could hardly mouth ‘yippee!'”  (The Chrysalis, and other MIT designs led to Daedalus, the HPA that flew from Crete to Sicily on April 23, 1988 – 72.44 miles in less than four hours.) 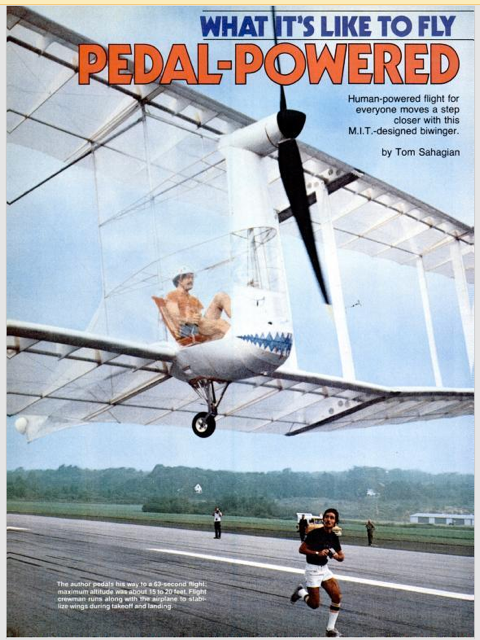 Bruno Mombrinie took the picture of the Chrysalis passing overhead. A photo editor at Popular Mechanics cut and pasted the image of him running after the airplane 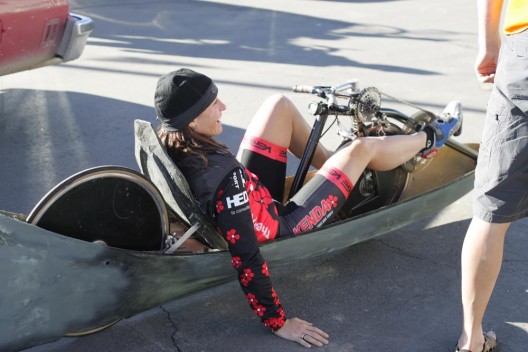 He’s involved in several entrepreneurial enterprises, having sold a specialized medical equipment company a few years ago and now helping promote CAFE and its many forward-thinking programs, including the Sky Taxi.

He envisioned a dual runway, minimum footprint airpark, with a square layout to allow taking off and landing in all wind directions.  The square, 80 meters per side, would eliminate crosswind operations, and the autonomous two-seaters would be whisking passengers in and out with great precision.  Battery swaps would take 18 seconds, according to Bruno, enabling rapid turnarounds and careful tending of the state of the all-important batteries. 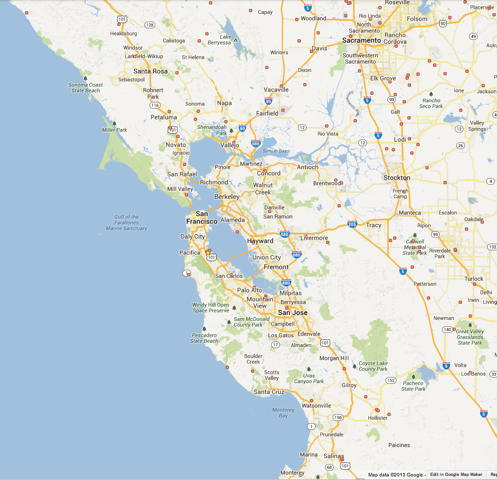 Airports within 100-mile radius around the Bay Area

With pocket airports sprinkled throughout a metropolitan area (San Francisco and the Bay Area in his presentation) and even integrated into major airports, passengers could land near desired locations or transfer to or from scheduled airline flights.  Further integration with commuter trains or other public transit would reduce overall ground traffic and free up freeways and byways.  Travel would be on demand, with sufficient Sky Taxis on hand to send people on 50 to 200 mile trips as needed.  Costs per passenger would be about 50 cents per kilometer or about 81 cents per mile.  Try finding a taxi that will take you that same 100 miles for a lower cost – or with anywhere near that speed. 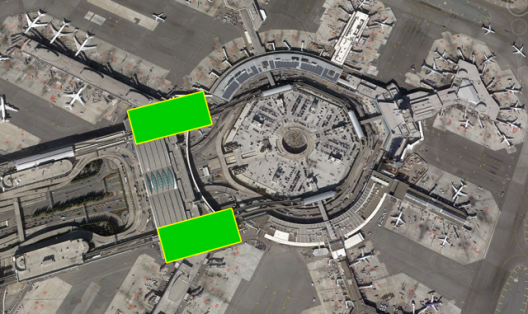 Best of all, this could be the start of a major injection of capital into the economy, with up to a trillion dollars in economic activity derived from this novel form of personal transport.

Following a coffee break, Dr. Seeley followed up with “Payload, Proximity and Pascals,” an overview of the physics, aerodynamics, and logistics required to help reach the happy state described in Bruno’s talk.  He talked about the imperative need to do something to reduce human-caused carbon emissions – 63 percent of which created in the last 25 years. 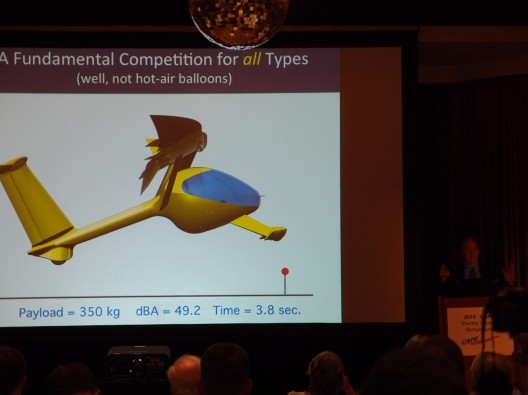 To make big changes, we need to develop binding standards.  At one time, according to Dr. Seeley, America had seven different railroad gauges, limiting the range and usefulness of individual rail systems.  We must plan a standard in advance that allows interoperability among all users, before the waste that comes from changes needed after initial implementation become apparent.

Dr. Seeley described many of the essential mission requirements for the pocket airport and the types of electric STOL aircraft that could fly from these ballpark-sized aerodromes at the Aviation Unleashed conference in 2010.  Proximity is “the holy grail” for successful implementation of such user-friendly enterprises.  Most airports today are far from population centers, driven there by noise laws and the natural reluctance to have million-pound objects zooming overhead.  Another aspect prevents more airparks distributed around the landscape – the “hardscape,” or areas already covered with buildings, highways, and other impediments to long runways and airport support structures.

Pascals, or units of energy per cubic meter required for rapid acceleration and steep, quiet climbs from the airport would keep neighbors happy.  Noise would non-negotiably be limited to less than 60 dBa at 40 meters (131 feet).   Thus, the planned Green Flight Challenges II, III, and IV will be devoted to rewarding those technologies that can speed a Sky Taxi to takeoff speed, help it climb steeply and emit ultra-low levels of noise while transporting its lucky passengers in safe, sustainable flight.

On March 11, the Foundation used Director Alan Soule’s Tesla S sedan to test noise against acceleration.  The car is a big, powerful vehicle, with a curb weight of 4,647 pounds and a loaded weight of 4,820 pounds with Alan driving solo.  Its 310 kilowatt (415 horsepower) motor took it from 0-73 kilometers per hour (45.26 mph) in 3.2 seconds – not supercar fast, but quick enough to reach Sky Taxi takeoff speed in 31.4 meters (103 feet).  For the equivalent power, a 600 kilogram (1,320 pound) Sky Taxi would require an 85 kW (114 hp) powerplant.  The Tesla passed the sidelines 40 meters from the track while producing only 60 dBa, certainly within the goals sought by NASA and CAFE personnel for neighborhood friendliness.

Definitely, high-torque wheel motors could play a part in accelerating Sky Taxis.  This one aspect of future commuter aircraft, coupled with liftoff to half a meter (1.64 feet) in less than 55 meters (180 feet) will comprise the main elements of GFC II and subsequent challenges.  Vertical takeoff and landing craft might have an advantage here, but hot air balloons would be forbidden.  They probably wouldn’t meet the cross-country requirements anyway.

Scoring will rely on an “empirical curve fit” for the aircraft that best combines payload, takeoff over an obstacle, quietness, and ease of recharging, among other demonstrable abilities.  This series of contests would provide an “autocatalytic” stimulus to new directions in aircraft development, prove the feasibility of NASA’s priorities for green, quiet, sustainable advances that enhance airspace capacity and safety, and that enhance CAFE and NASA’s mission to bring forth innovations “for the good of all.”