Calin Gologan of PC-Aero GMBH in Germany and George Bye of Bye Aerospace in Colorado made an auspicious announcement about practical solar-electric propulsion advances for manned and unmanned aircraft.  Their presentation at the eighth annual Electric Aircraft Symposium pointed toward a possible rebirth in flight training at prices not seen in decades.  Their two companies are forging an alliance called the Aero Electric Aircraft Corporation (AEAC), which will produce a two-seat, side-by-side sport and training aircraft called the Sun Flyer.  As stated in their press release, “The Company will bring to market the first U.S.-sponsored, practical all-electric airplane serving the training, recreational and general aviation markets.” 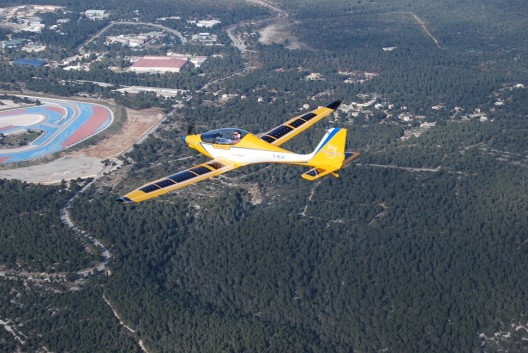 Elektra One flies near Cannes, France in 2013. Sun Flyer trainer will have fixed tricycle gear

Gologan and Bye’s talk at the Symposium focused on their joint plans to create practical solar-electric propulsion advances in manned and unmanned small aircraft.  Each partner has demonstrated experience in forging new directions for electric light aircraft.

Calin Gologan’s PC-Aero, for instance, consults on propulsion, structures and aerodynamics, and has produced Elektra One, a single-seat electric airplane that has flown at Friedrichshafen and Oshkosh.  From that, he has developed the Elektra Two Trainer and Record, with unmanned and piloted versions that will explore different performance realms.

The SolarStratos, a specially “tuned” version of the Record with Raphael Domjan as project founder and pilot, will explore the upper atmosphere, powered undoubtedly by a new motor development which Gologan unveiled during the Symposium.    The Elektra UAS will offer a civil, certified unmanned system that can be autonomous under 30.000 feet with a safety pilot remotely controlling or up to 80,000 feet without any remote human assistance.  With a five meters-per-second (984 feet per minute) rate of climb, the claimed two hours to exceed that top altitude seems reasonable since brushless electric motors don’t feel the effects of altitude as do internal combustion engines.

As with any well-designed electric aircraft, the power required to maintain level flight at best glide ratio is a fraction of the power required for takeoff and climb.  The SolarStratos will require a mere 2.2 kilowatts  (2.95 horsepower) for cruise.

Gologan demonstrated a new type of motor, a dual version of the Eck-Geiger pancake motor which has two separate motors sharing a single output shaft and capable of being run together or independently.  This should enhance safe operation for training.

George Bye’s earlier bid to create an electric Cessna 172 created a two-seat airplane with a motor controller the size of a watermelon and battery packs that filled the back seat area of the airplane.   Even though it flew 25 times, it was not the trainer for which George had hoped. 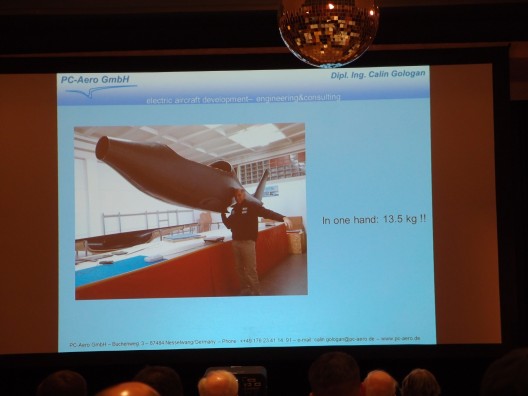 Because of recent leaps in technology, the new airplanes are smaller, lighter, and much less costly.  They are robust because of their strong carbon-fiber construction, and energy efficient because of their light weight and small power systems.    This leads to low-cost operation compared with a typical two-seat European or LSA trainer costing $70.00 to $100.00 per hour just for operating costs.   Add hangar fees, maintenance, and the cost of a flight instructor to price most people out of that otherwise wonderful activity.  At $10.00 per hour, operating costs for an electric trainer become more plausible for middle-class American or European customers to begin flight training.

The new aircraft are environmentally friendly, with low noise levels and no emissions to upset the neighbors.  On some versions, their wings are covered with thin-film solar cells that extend the range of the aircraft and endurance of the batteries.  Batteries have gone from 160 Watt-hours per kilogram to 250, and that large controller is now the size of a deck of cards, dropping from many pounds to a few ounces.

AEAC’s Sun Flyer trainer will have a redundant motor, but probably more powerful than that on the PC-Aero versions to deal with the 200 kilogram (440-pound) empty weight and a realistic payload with adequate battery capacity to enable real-world training.  The team will try to hit the Light Sport Aircraft weight limit of 1,320 pounds all-up weight.

Bye is striving toward three-hour endurance on batteries alone, allowing hour-and-a-half training missions with a reserve.  Batteries will be arranged in two sets of two battery packs, quickly removable and replaceable.  This will enable training to continue as quickly as it would with conventional aircraft being refueled and sent back aloft.  Charlie Johnson, who worked on the electric 172, is helping head up the current effort with George.

Needless to say, the crowd at EAS VIII was enthusiastic about the possibilities coming from this new partnership.