Aaron Singer, owner and operator of Seaplane Adventures, San Francisco with his wife Tiffany, gave an excellent assessment of why we don’t see more electric seaplanes in the mix of products coming into play.  Pointing out that most water-borne efforts so far have been ultralights, such as Dale Kramer’s e-Lazair amphibian, he gave examples of the energy necessary to lift off from water and the how that plays in the daily use of a DeHavilland Beaver and Cessna 172 in which his team flies tourists around the Bay Area.

Their web site explains their mission.  “The Singers bought San Francisco Seaplane Tours in January of this year and have rebranded the company as Seaplane Adventures and revamped the operation with a new logo, new energy and 100% passion for flying seaplanes in the Bay Area. We are in the Happy Business – it’s our job to bring to you a safe, exhilarating, beautiful, one-of-a-kind experience flying in a seaplane over San Francisco!”

For an 18-minute version of this video, try this link.

Singer gave a brief history of seaplane flight, showing that seaplanes were prevalent when there were no airports, even though they require more power to overcome the drag of water on their hulls during takeoff.  Pilotfriend.com explains the steps in getting a seaplane to lift from water.

The hydrodynamic  drag builds to a “hump” at the apex of power required to break free from the water.  A seaplane goes through four phases in taking off according to Pilotfriend.com: 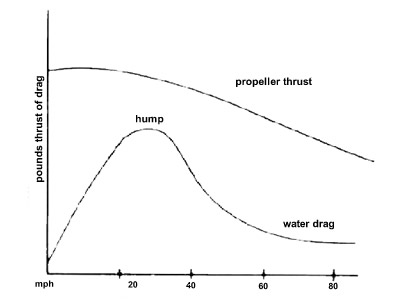 Diagram shows engine thrust required to overcome drag of hull or floats on water, with critical “hump” to be overcome before flight is possible

A displacement hull is simply one that sits in the water, and can be motivated by oars, sails, or some type of paddle-wheel or screw arrangement.  Its speed is limited to a number derived from the hull length (wildly oversimplified).

As a boat, or seaplane hull or floats begin to move forward faster, the airplane develops enough lift to start pulling the machine out of the water, it reaches that “hump” phase, where the greatest power is required.  Once the seaplane’s hull or floats are “on the step” and planing partly above the water like a high-powered speedboat, the airplane accelerates more easily and quickly reaches takeoff speed.   According to Singer, the “hump” is the biggest problem for electrification, requiring 1/3 of the total power used in a flight for ½ the weight that an electric seaplane will carry for the necessary batteries.   An air taxi, such as those he and Tiffany run, would require additional energy storage because of the repeated demands made on their seaplanes each day.

To start on what will probably be a long research study of how much additional power is needed to get a seaplane over the hump, look at this X-Plane’s tutorial on the Froude Number, a non-dimensional figure as important to boats and seaplanes as a Reynolds Number is to the aeronautical design of airplanes.  In fact, the Froude Number can help define the transition from laminar to turbulent flow, a big consideration in airfoil design, for instance.

The need for quick turnarounds would require either battery swapping or fast charging capabilities.  With tourists keeping Singer’s airplanes busy all day, downtime is not an option.  For designers who want to create a personal seaplane, though, such considerations are simplified or even eliminated.  Thomas Brodeskift, for instance, has been designing and crafting a two-seat, hybrid-powered amphibian for several years now, the Equator P2 Excursion.

Whether you decide to head for Mill Valley to ride with Aaron, or want to be the first to fly an Equator P2, seaplane flying brings an added dimension to aerial sports.  Let’s hope that electric power can add further to that dimension.