David Calley heads Planet Rider LLC, a design group working on a highly innovative three-wheel commuter vehicle that combines pedaling, electric power and aerodynamics to make for an exciting ride.  Any resemblance between this machine and the average e-bike is like the difference between an early Rogallo wing and the Archaeopteryx.

He has made a significant notch in fuel savings for big rig trucks with the angular extensions you see on tailgates of trailers cruising America’s highways.  Fuel savings of five percent or more are a boon to fleet operators, thanks to Calley’s patented design, now manufactured by ATDynamics.  He is also a member of the CAFE Foundation’s advisory board. 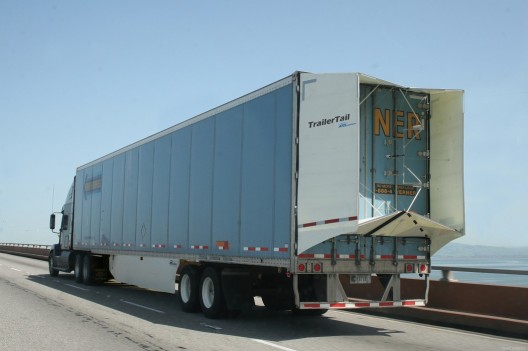 Thus, it was informative to see his presentation at the eighth annual Electric Aircraft Symposium.  His work on low-RPM motors using his simple transverse flux motor design enables excellent power and high torque from light-weight, compact motors.  This fits the need to swing big, slow propellers for applications such as air taxis.  He talked about a new motor topology for a coaxial design and for wheel motors that could help accelerate an air taxi to takeoff speed.  Airbus is using similar wheel motors on its E-Fan prototype. 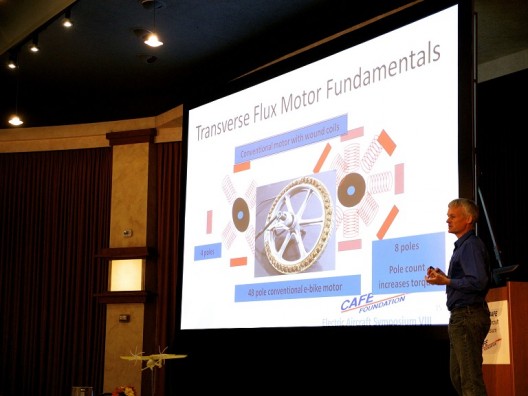 Since airplane propellers are more efficient when less loaded, Calley sees the need for 51 to 100 meter per second (167.3 to 328 feet per second) tip speeds on large, slow-turning propellers – similar to helicopter rotors.  Even the higher speed translates to only Mach 0.29 at sea level, generating very low noise.  Compare this to smaller propellers turning at higher speeds, with tip speeds often approaching the speed of sound – and generating high noise levels in the process.  This type of unacceptable racket must be avoided in air taxis, which will be taking off and landing in residential areas to be most useful.  Noisy propellers are also less efficient. 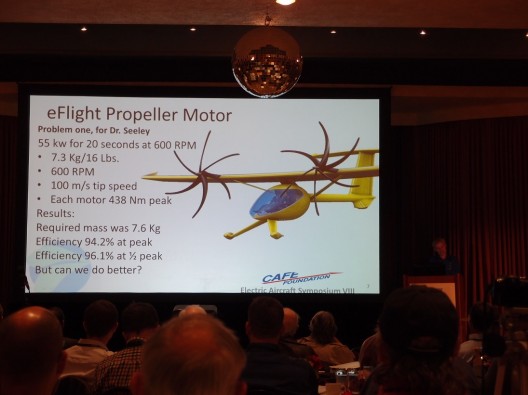 Motors that can deliver high torque without reduction gearing would be great, and that’s what Calley’s high torque density motors deliver.  His E-flight propeller motor, for instance, should be capable of putting out 55 kilowatts (73.7 hp.) for 20 seconds at 600 RPM and 438 Newton meters (323 foot-pounds) of torque.  That should be able to accelerate a sky taxi to takeoff speed in a short distance, especially when complemented by a wheel motor using Planet Rider axial transverse flux motor (ATFM) topology, similar to the smaller model on the enclosed Planet Rider three-wheeler.  He explained that such a motor could put out 36 hp continuallyfor a weight of only 7.6 kilograms (16 pounds), not too eye-brow-raising considering the strides made in more conventional radial and axial flux model aircraft motors in recent years.

With cool operation, a high pole count ATFM development could, according to Calley’s closing remarks produce up to 40 kilowatts per kilogram, or about 24 horsepower per pound – and for about $180 worth of electromagnetic materials.

We wish him well.  Low-cost motors that deliver big performance will go a long way toward making electronic flight ubiquitous – one of Dr. Seeley’s goals for sky taxis.