Klaus Ohlmann says the sailplanes and solar-powered aircraft in which he has set several world records are powered by a “gravitational engine with an external fusion reactor.”  He has been on a sun-stoked roll the last few years.   His recounting of the epic journey first to fly a Stemme motorglider from Germany to Katmandu, and then to conquer Mount Everest in a sailplane, kept the eighth annual Electric Aircraft Symposium audience enthralled.  That feat alone would be enough for admiration, but his seemingly never-ending series of adventures provoke a bit of awe. 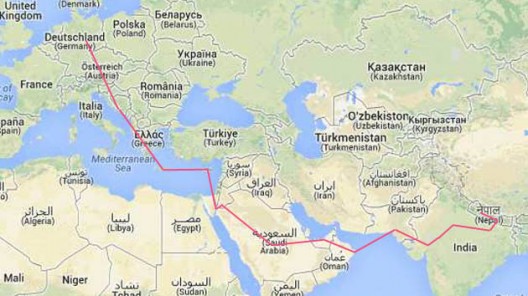 Epic journey in a motorglider, Germany to Nepal took a bit longer than planned

He is a member of the Mountain Wave Project (MWP), a group which explores high-altitude weather systems to verify theoretical considerations.   As stated in the MWP’s web site, it is “a project of the scientific and meteorological panel of OSTIV (Organisation Scientifique et Technique du Vol à Voile) …conceived during an OSTIV seminar 1998 in Serres/France by René Heise and Klaus Ohlmann and attracted several enthusiastic scientists/pilots since.”  He holds the world’s absolute distance record in a sailplane – 3,008 kilometers (1,865 miles), flown along the Andes in 2003 in a Schemp-Hirth Nimbus 4 DM.

He and Eric Raymond flew e-Genius to the second place finish in the Green Flight Challenge in September, 2011.  He set several records in Icare 2, a 25-meter (82-feet) wingspan, solar-powered airplane while flying around the French Alps.

The flight to Nepal came about because Klaus determined it was easier to fly there than to ship the airplane by container ship and meet up with it.  The Stemme SV-10T, after all, is a real airplane and a real sailplane, with excellent capabilities in either mode.  With six hours endurance and 1,200 kilometer (744 mile) range possible Klaus could make big jumps on his way to the high mountains on the border of China. 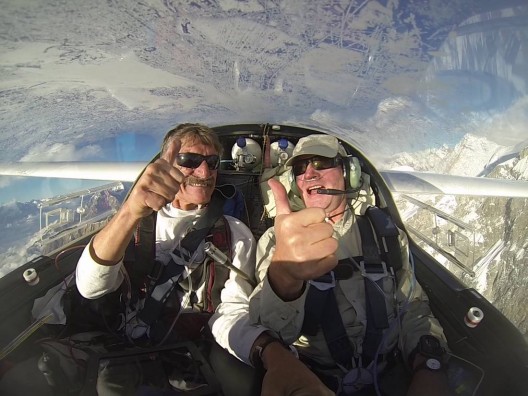 He and Anssi Soila, a private investor and pilot, took on the mission for the MWP and the DLR (the German space agency) “to explore turbulence parameters in and above the highest valleys and mountains, vertical momentum transfer and the diurnal anabatic flow in the complex terrain. Investigation of ozone and carbon dioxide levels is also being considered.”

They carried out “some measurements over some of the glaciers using airborne optical methods (DLR-MACS). This part of the expedition is in co-operation with the German Aerospace Center (DLR), Flinders University in Adelaide, Australia and the International Centre for Integrated Mountain Development (ICIMOD), Nepal. The collaboration with ICIMOD ensures that the results from our studies will be used for applications relevant to Nepal in terms of GEO-hazards and risk management.” 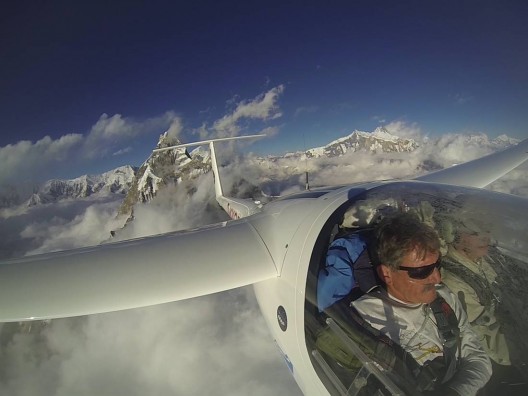 Descending after the successful overflight of Mount Everest

See Klaus’s recounting of the journey to Nepal and the many flights over and around Everest under power and unpowered.  The images of things flying up and tapping the canopy in Klaus’s presentation gave Symposium attendees a startling view of how turbulent some of the flights were.  It was a stunning reminder of the talent and courage that our presenters share.