Qichao Hu is ​Cofounder, President and interim CEO of SolidEnergy, a battery company with a different technology and a unique business plan.  According to his company’s web site, he “Cofounded SolidEnergy while a PhD student at MIT, and led it through early stage business plan competition, fundraising, licensing and collaboration negotiation, and technology development. 2012 Forbes 30 Under 30 in Energy, and is a graduate of MIT and Harvard University.”  His team was also the Deployment and Infrastructure Category Winner in the 2012 MIT Clean Energy Prize competition. 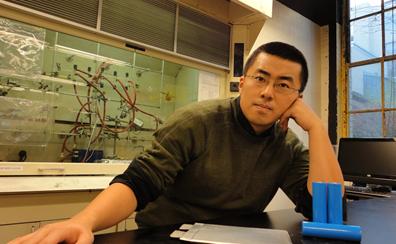 In his presentation to the eighth annual Electric Aircraft Symposium on April 25, Hu told about his Waltham, Massachusetts startup’s strategic partnership with A123, the Pacific Northwest National Laboratory and Argonne National Laboratory.  The firm’s laboratory and intellectual depth enables creating a battery that is safer, lighter and smaller, as Hu told attendees at the Symposium.

Solid Energy Systems Corp. is now affiliated with A123 Venture Technologies Corp.  This allows Hu and his team, “The Magnificent Seven,” to develop chemistry and technology, and feed this to manufacturing operations such as A123.  This different business plan keeps SolidEnergy from falling into the trap of trying to create a new battery company and running into the costs of buying all the manufacturing and lab equipment necessary to sustain such an operation.  He points to the failed attempts along the way, and notes that his technology can be applied in already operating firms, such as A123, or expanded into dormant plants without great changes in existing machinery.

He wants to keep his operation an efficient research and development program, and let others do what they do best – make working batteries.  To that end, his small firm can use its 3,200 square foot, 10,000 parts per million cleanroom and the combined intellect and experience of its team members to improve the cell-level energy density and cycle life of batteries it designs.  SolidEnergy’s chemistries complement existing manufacturing resources and fit into current battery form factors, including pouches and 18650 cylinders. 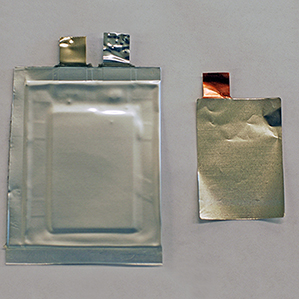 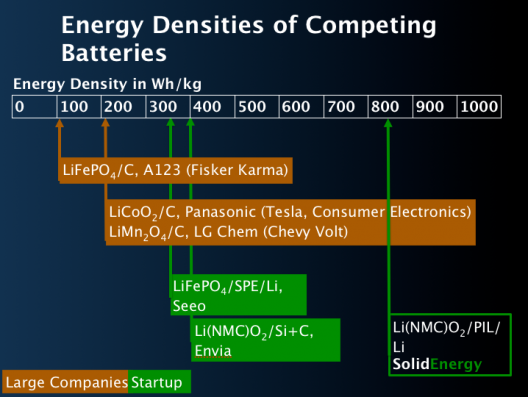 Where SolidEnergy is headed in energy density, besting the best at this time

Hu discussed the volatility of lithium cells, noting recent news including the fact that Malaysian Airlines Flight MH370 was carrying a cargo of lithium batteries.  His batteries will be safe because his firm’s “solid polymer and Ionic liquid electrolytes are both non-flammable and non-volatile, and can safely operate at elevated temperatures.”

MIT’s Technology Review expanded on the technology.  “SolidEnergy uses a two-part electrolyte. First, it coats the lithium metal with a thin polymer, much like the solid electrolyte others have used. The key difference is that it’s very thin, so it doesn’t slow down lithium ions, and the battery doesn’t need to be heated. The thin polymer can be applied using conventional electrode-coating equipment, Hu says. On its own, the thin polymer isn’t enough to prevent short circuits, so he supplements it with a liquid electrolyte.” 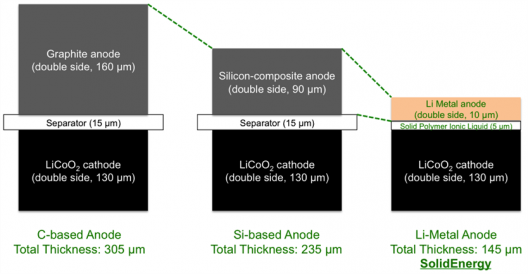 This combination of ingredients produces a more efficient, more energy-dense battery that can sell for 80 percent of existing technologies.  With improvements in cycle life and continuing development, Hu sees his battery reaching outputs four times that of current Li cells.  Best of all, the first small cells for small electronic devices should be available within a year – not the usual five years of further development.