A Big Win for Stuttgart Team

Dipl-Ing Ingmar Geiß, Deputy Project Leader for e-Genius at the Institute of Aircraft Design at the University of Stuttgart, shared this pleasant news:  “I am happy to tell you that our hybrid-electric “ECO4” has won the Berblinger Prize 2016.  ECO4 combines an optimized electric airframe with a modern combustion engine generating electricity. This combination leads to an aircraft which cruises at 120 knots and consumes 40 percent less fuel than comparable state-of-the-art airplanes with conventional propulsion. As a further advantage, a small but powerful battery system enables a silent take-off without the combustion engine running, reducing significantly the noise emissions.”

Gunter Czisch, mayor of Ulm, presented the 23,000 euro ($24,035 US) prize to the team, which intends to invest the amount “directly into the further development of the airplane.”  The prize was founded in recognition of Albrecht Ludwig Berblinger, “the little tailor of Ulm, who tried to cross the river Danube in 1811 with a glider.  Although capable of flying, his glider crashed due to severe turbulence.  A jury of 16 members from aerospace industry, universities, research institutions and representatives of the town of Ulm decide the winner. 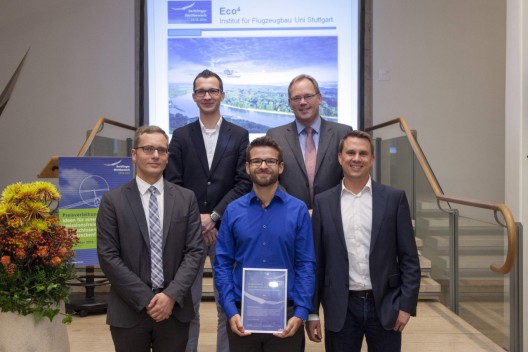 Part of Ingmar’s Master’s Degree program, EC04 represents an expansion of his earlier work with e-Genius, the two-seat, battery-powered craft that won second place in the 2011 Green Flight Challenge.  e-Genius has since been flown by Klaus Ohlmann to set several records and undertake long cross-country flights.  Extending that range, a new pod holding a Wankel engine and generator allows flight up to 620 miles, well beyond the comfort range of most pilots.

EC04 will increase the range to 1,200 nautical miles – with four persons on board (1,800 miles with three up).  EC04 will have a quiet takeoff distance of 600 meters (1,968 feet) and a climb rate of five meters per second (984 feet per minute).  Considering its 45-kilowatt (60 horsepower) Diesel-powered generator, predicted performance is remarkably similar to that of a 180-horsepower Cessna Skyhawk.  A Cessna 172M at 75-percent power, cruising at 8,000 feet, will burn through its 38 gallons of useable fuel in 4.7 hours, according to the Cessna 172 Guide.  That’s a fuel burn of 8 U. S. gallons per hour. 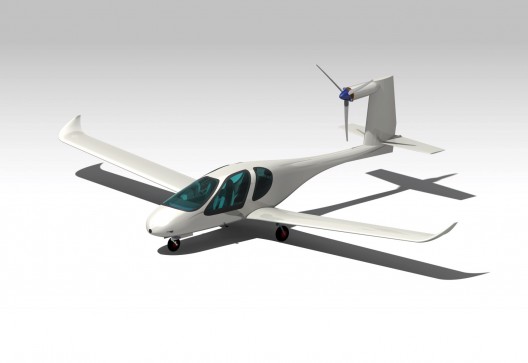 The EC04 would supposedly represent a 40-percent savings, making its equivalent fuel burn 4.8 gallons per hour, for an economy of 28.75 mpg, or 115 passenger miles per gallon.  Your editor will be happy to be corrected or updated on these back-of-envelope figures, since these seem low compared to what the HY4 and e-Genius manage.

EC04 continue the long-term work of Professor Rudolf Voit-Nitschmann, who developed the motor on vertical stabilizer configuration with Icare 2, a solar-powered craft that first flew in 1996.  E-Genius continued with this configuration.  At the 2011 Green Flight Challenge, the Professor explained to your editor that the propeller’s placement allowed low drag, its blast impinging only on the upper part of the stabilizer and rudder.  E-Genius has proven itself for the last five years with increasingly long flights, the latest powered by a hybrid system similar to that proposed for EC04.

Ingmar and his team will present their work on EC04 at the 2017 Sustainable Aircraft Symposium to be held in San Francisco.  Dr. Joseph Kallo will also attend with news on DLR and Pipistrel’s ongoing work with the HY4.  A comparison of the two four-seaters should be a fascinating glimpse into the near future of green, high-performance, practical aircraft.