University of Houston physicists think they may have overcome the last hurdle to generating abundant hydrogen, a fuel that is as elusive as it is clean.  Their new catalyst, “composed of easily available, low-cost materials and operating far more efficiently than previous catalysts,” could solve at least one of the problems associated with generating and storing H2.

Jeannie Kever, writing for the University newsletter, reports Paul C. W. Chu, TLL Temple Chair of Science and founding director and chief scientist of the Texas Center for Superconductivity at UH and colleagues physicists Zhifeng Ren and Shuo Chen, have created a catalyst “Cost-wise… much lower and performance-wise, much better.”  The quote comes from said Zhifeng Ren, M.D. Anderson professor of physics and lead author on the paper. The catalyst has operated more than 20 hours and 10,000 cycles in testing.

Other researchers involved in the project include postdoctoral researchers Haiqing Zhou and Fang Yu, and graduate students Jingying Sun and Ran He. 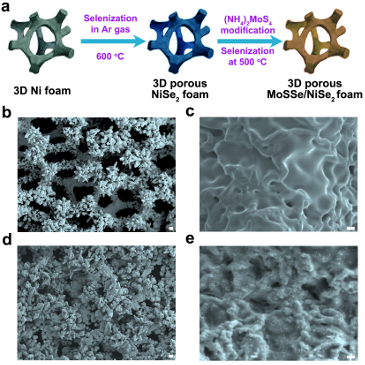 Their paper, “Highly active catalyst derived from a 3D foam of Fe (PO3)2/Ni2P for extremely efficient water oxidation,” published in the Proceedings of the National Academy of Science, explains that their catalyst is made of ferrous metaphosphate grown on a conductive nickel foam platform.

Common and not Noble

The ability to use common materials rather than the noble metals (such as iridium, platinum, or ruthenium) usually associated with such catalysts helps keep costs low.  Ren explains, “In this work, we discovered a highly active and stable electrocatalyst based on earth-abundant elements, which even outperforms the noble metal based ones.  Our discovery may lead to a more economic approach for hydrogen production from water electrolysis.”

Testing determined that the hybrid catalyst required 69 millivolts from an external energy source to achieve a current density of 10 milliamps per square centimeter, which the researchers said is much better than many previously reported tests. In this case, the current “splits” the water, converting it to hydrogen at the cathode. Achieving the necessary current density with lower voltage improves energy conversion efficiency and reduces preparation costs.

“Testing determined that the hybrid catalyst required 69 millivolts from an external energy source to achieve a current density of 10 milliamps per square centimeter, which the researchers said is much better than many previously reported tests. In this case, the current “splits” the water, converting it to hydrogen at the cathode. Achieving the necessary current density with lower voltage improves energy conversion efficiency and reduces preparation costs.”

Splitting water into hydrogen and oxygen requires two separate reactions, each requiring a separate electrode.  One produces a hydrogen evolution reaction and the other an oxygen evolution reaction.  Both reactions are necessary to produce the desired hydrogen.  The primary byproduct “when clean energy is produced,” is water from the recombining of oxygen and hydrogen.  Hydrogen, however produced, can be easily stored, according to the researchers.

Most hydrogen is currently produced through steam methane reforming and coal gasification.  Thus, there are carbon offsets for the clean energy produced by burning the hydrogen, sometimes reducing H2’s desirability.  Other methods involving solar-powered water splitting, have been tried, but are too inefficient, according to Houston researchers.

Daniel Nocera, formerly with Harvard University, and now with the Institute of Chemical Technology (ICT) in Mumbai, India, worked with Pamela Silver of the Harvard Medical School to create an “artificial leaf.”  The leaf used sunlight to convert water to hydrogen and oxygen, reportedly more efficiently than real leaves could manage.  He became disenchanted with the slowness with which new developments such as his gained financial backing in America, and left for India.

He thinks a “renewable energy revolution will take place” in the country.

“I have no doubt about it. The revolution in renewable energy will happen in India. When you look at places in the developed world like the US, you are looking backwards, meaning that’s what it used to be like (coal, oil and gas) and the emerging countries have a decision to take: Do they want to build something looking back or do they want to do something different?

Whether the big breakthrough in H2 production comes from America or India, the benefits will be universal.  Challenges still await those who want to tackle the problems of packaging and distributing the cleanest of energy sources.