Randall Fishman must have a wall of medals, trophies, and award plaques for his many breakthroughs in electric flying.  He was the first to astound Oshkosh attendees with the flight of an electric airplane, his ElectraFlyer C with a brushed motor and controller configured by Fishman.  He picked up not only prizes, but magazine and newspaper column inches and Internet hits.  His developments since then have diverged onto two paths, a two-seater and a pair of ultralight motorgliders.

Randall sold a kit last year for his ElectraFlyer X to Richard Steeves, a physician from Madison, Wisconsin (look for an upcoming entry). and has been providing technical and material support. The X  should take to the skies soon.

ElectraFlyer’s Ultralight development took two turns in the last seven months. At the Sebring, Florida Light Sport Aircraft Expo in January, your editor saw an adaptation of a single-seat motorglider, displaying a new motor of Fishman’s design housed in a scooped air intake. The motor was a shiny, 3.5 inch wide nickel-plated steel cylinder, a model-airplane-like “outrunner” with the rotor attached to the two-bladed propeller. The stator, attached to the motor mount, housed electrical connections to the battery inside the pod fairing. Internally, the working parts of the rotor and stator were only 1.5 inches wide.  Randall explained that the motor could be made more powerful with the addition of  one or two more such “stacks,” each unit prompting 20 more kilowatts (27 horsepower continuous, 30 kilowatts – or 40.2 horsepower – peak).  The motor as shown weighed only 26 pounds. 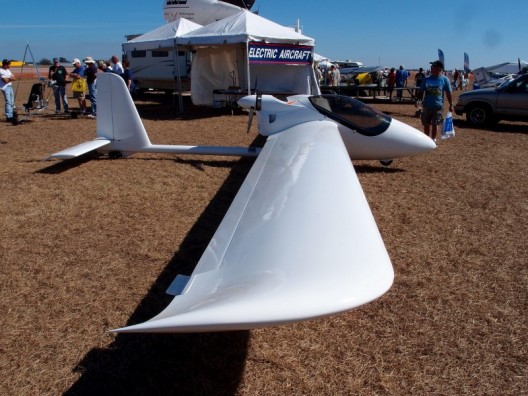 Since then, the motor has turned out to be better than expected after extended testing.  More powerful versions of the motor would put out 60 and 90 kilowatts respectively, making them great candidates for LSA-type aircraft, two-seat trikes and other craft that would benefit from that level of power.  Imagine a motor nine inches in diameter and less than 7 inches long generating more power than a Rotax or small Continental. 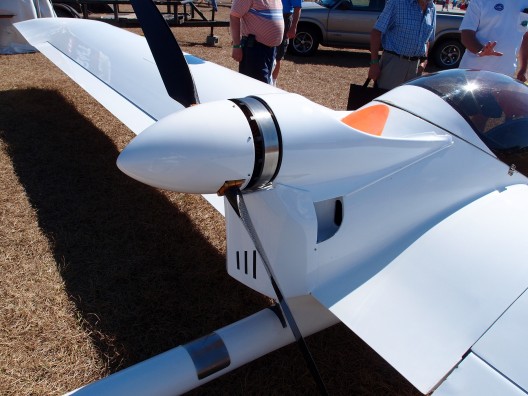 3-1/2 inch wide motor puts out 30 kW continuously. This unit is now in the ULS

He also promised that the airplane would soon “be different” from what we observed at Sebring.  He plans on selling that single-boom airplane – which served its purpose in providing a development platform for the new motor.  He introduced a new and different ultralight motorglider – The ElectraFlyer ULS (Ultra-Light Soarer) – at AirVenture 2012.

The single-boom pusher transformed into a twin-boom, more streamlined pusher at Oshkosh, but retained the size and ultralight weight of the earlier machine. Both have 37-foot wingspans, small for a glider, but capable of providing sporting afternoons following self-launches. Randall says the current battery packs weigh only 45 pounds total, with one installed in each wing root. Each battery pack is mounted in a stainless steel box and slipped into the wing root on either side of the roomy pilot enclosure.   Since each battery box has space for two 22.5 pound packs, a flyer can elect to have two packs in each battery box for maximum range and two hours of powered flight; or a lighter single pack for better soaring performance and one hour of powered flight – enough for a launch and several searches for thermals. Each box has a forward plenum that captures high-pressure cooling air from the bottom of each wing and an aft vent to release heat from battery operation.

Individual battery cells are thin rectangles stacked horizontally in each pack, with space between them to allow air to flow around each cell before the mildly heated air exits the airplane through the low-pressure vent on the top of each wing.

The airplane has a carbon-fiber, epoxy PVC foam sandwich structure of fine quality, part of a two-meter (6.57 feet) wide structure with the center-section wings and twin tail booms. This type of arrangement doesn’t require disconnecting and re-connecting controls for the rudders or elevator. Only the 15-foot, 40 pound outer wing panels can be detached and and should be easy to maneuver into the airplane’s trailer. With the exception of the small spoilers, controls are self-connecting when the wings are plugged in and pinned. Flaperons help keep the airplane in the ultralight landing speed range and with the spoilers allow flexible glide path control for landing.

With its sporting glide ratio and 1.2 meter per second (240 feet per minute) sink rate, the little ULS is attracting interest from ultralight and sailplane pilots. Its $59,000 price tag (high for an ultralight, low for a sailplane) may seem a bit steep at first, but soaring pilots often pay $75 to $100 for a towed launch and can be on the ground in 15 minutes if the lift isn’t there. A 40-cent takeoff and climb, and the ability to seek out rising air, should make economic sense in the long run.

Randall told this writer of a weekend flight where he was able to climb to 2,500 feet and find “green” air above an area where hang-glider pilots were descending, not having been able to find the thermals that were just out of reach at their launch altitude.  Randall points to the flexibility of the airplane, able to find lift at lower altitudes that normally towed sailplanes might miss on their way to 3,000 or 4,000 feet.  He can always restart the motor if a hunch about local conditions does not meet expectations.  He is also happy with the fact that he can fly from a regular airport and not have to drive to a distant soaring field.  The airplane’s tricycle landing gear allows him to forego a ground crew that some motorized sailplanes require.

Randall says the airplane is in production now, and he can supply an airplane within 90 days of receiving an order. ElectraFlyer has gained many firsts in its short history, and should achieve a solid following with this beautiful, swoopy offering.