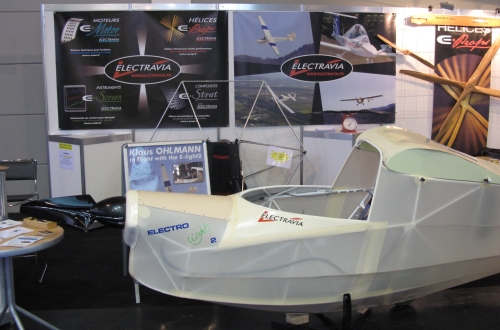 At this year’s Aero Expo in Friedrichshafen, Germany, her firm displayed the fuselage of the Electrolight 2, a modified Fauconnet sailplane, fitted with a 30-hp Lynch-type motor, controller, and batteries.  It is the least expensive electric motorglider on the market at only 30,000 Euros ($39,600), and allows powered flight for recharging costs of about 0.65 Euros per hour (86 cents).  The motor, normally graced by one of Anne’s wooden e-Props, had a forward-folding “clap propeller” or “bec de canard” (literally, the beak of the duck), a variant on the light carbon fiber propellers that e-Props also produces.  This should reduce drag and help improve the performance of the Fauconnet, a French version of the popular Scheibe L-Spatz, which Anne notes was flown by every young German learning to fly sailplanes a few years back.

Electravia restores old airframes, installs the power system and sells the “new” motorglider to the public.  Even multi-record-holding Klaus Ohlmann has endorsed the airplane as a “great operational motor glider.” 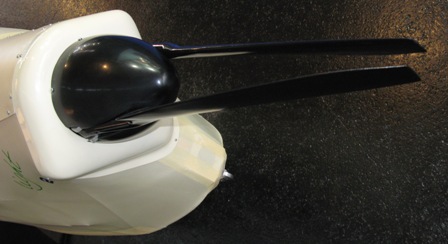 Whether it kindles nostalgia or seems a reasonable way to own a motorglider, Electravia sold three Electrolight 2s during the Expo, as well as two motor systems.

Electravia also showed a range of motors from 15 to 80 horsepower, and participated in the Flieger magazine display of innovative powerplants.

Stepping it up one level, Anne has also introduced a fourth arm of Electravia, e-Strat, making high-performance composite parts. 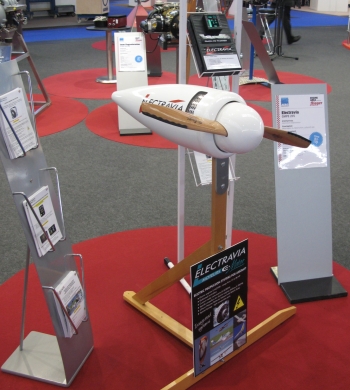 Anne presented a company overview during the event, emphasizing the breadth of her company and the practical approach she brings to her enterprise.  She explained that electric aircraft can be prototypes, proof-of-concept, demonstrators, or real, operational flying machines.  Electravia obviously adheres to producing the latter, using proven components and assembling them into affordable packages.