Combine a FIAT 500e with an autogyro and you get the Cavalon, a two-seat, side-by-side, relatively quiet electric flying machine.   Both use the same Bosch motor and inverter.  Auto Gyro The Aircraft Company, Cavalon’s maker, says the 80 kilowatt motor drives a three-blade propeller at up to 2,300 rpm and provides performance similar to that for the Rotax-powered version of the craft. 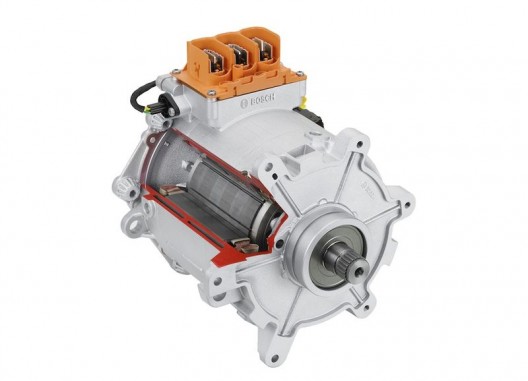 180 x 120 millimeters, the Bosch motor will fit in a backpack

A Bosch 180/120 SMG (separate motor generator) with a planetary gear propeller speed reduction powers the aircraft.   Capable of regenerative braking on the little FIAT as controlled by an INVCON 2.3 inverter, it will be interesting to see if such recharging can be expected when the Cavalon glides.  The motor/controller combination powers the FIAT 500e, the electric Smart Car, and is used to help drive the rear wheels on the Peugeot 3008 Diesel HYbrid4.

Compact like the cars and autogyro it drives, the motor gets its designation from its 180 millimeter diameter, a little over seven inches, and 120 millimeter length (4.6 inches).  Its makers claim it could fit into a “typical school backpack,” although the kid might complain about lugging around its 32-kilogram (70.4 pound) heft.

The Cavalon’s battery pack is composed of Kokam prismatic cells storing 16.2 Amp-hours of energy and can feed the motor a maximum of 400 Volts.  The high voltage accounts for the motor’s 12,000 rpm top speed and its requisite reduction drive for the propeller.  For a high-speed motor, the 180/120 provides impressive torque, 200 Newton-meters (147.5 foot-pounds). 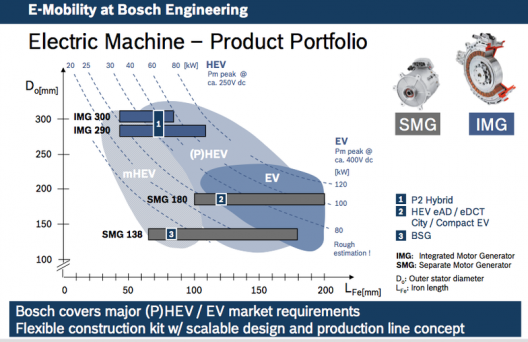 Bosch, like Siemens, seems intent on covering a range of electric vehicle needs

eCavalon’s first flight took place on June 24 at the Hildesheim airfield.  Company president Otmar Birkner says, “Today we flew tomorrow’s aircraft. For now we share the same challenges for endurance as the automotive industry but in time, this will increase from the current 45 minutes and the future will become the present.”

The video is a year old and depicts a flight in a Rotax-powered Cavalon, but shows off the roomy cockpit and excellent visibility to advantage.  Autogyros are also capable of autorotating down to a small landing space. 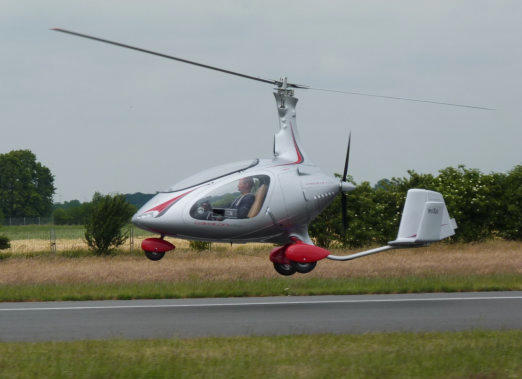 Clean lines of Cavalon autogyro lend themselves to electric flight

Part of the Niedersachsen Aviat, a consortium of North Saxony aviation firms, The AutoGyro Group describes itself as, “A world leader in the development, production and distribution of Gyroplanes. Since its foundation in 1999, the ultra-light aircraft specialist has enjoyed constant growth and now has a team of highly qualified specialists and engineers. With a global network of distributors in over 40 countries, AutoGyro aims to deliver unlimited and safe flying enjoyment to its clients with the versatile gyroplanes.”

If the Bosch powerplant lives up to its goal for this application, gyrocopters could become much quieter in the near future.