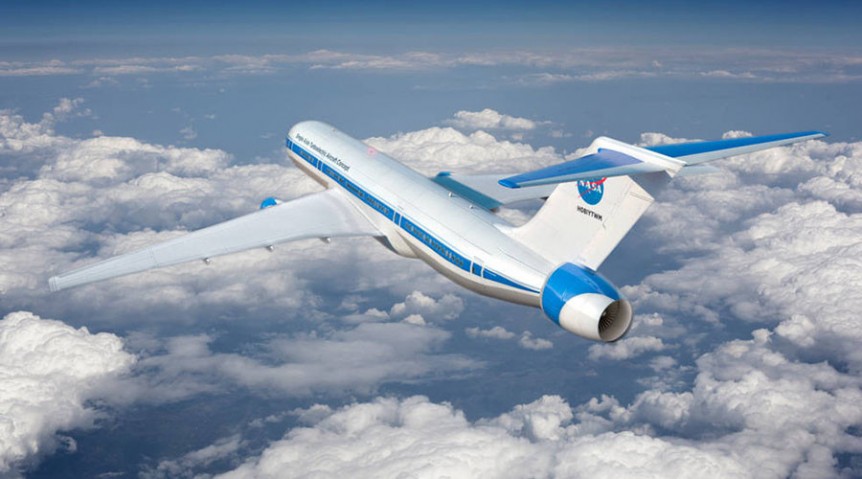 NASA’s Glenn Research Center reviews the prevalence of fossil fuels in keeping us flying for over a century. “Since the beginning, commercial planes have been powered by carbon-based fuels such as gasoline or kerosene. While these provide the energy to lift large commercial jets into the world’s airspace, electric power is now seen as a new frontier for providing thrust and power for flight.”

Noting the use of hybrid and turboelectric power used to increase efficiency in cars, boats and trains, NASA has set a goal “to help the aircraft industry shift from relying solely on gas turbines to using hybrid electric and turboelectric propulsion in order to reduce energy consumption, emissions and noise.”

This would require a large shift in propulsion and overall aircraft design and Jim Heidmann, manager for NASA’s Advanced Air Transport Technology project reflects on those changes. “Moving toward alternative systems requires creating new aircraft designs as well as propulsion systems that integrate battery technologies and electromagnetic machines like motors and generators with more efficient engines.”

Prospective “looks” could be new and unusual to say the least. Using power systems that generate electricity in place of, or in addition to, thrust at the turbine engine, and using that electricity to produce thrust at other places on the aircraft. That seems to allow distributed thrust with theoretically more economical ways to produce that thrust – NASA’s suggesting a 30-percent fuel saving.

Amy Jankovsky, subproject lead engineer says distributing power throughout the aircraft could, “reduce drag for a given amount of fuel burned,” and adds, “Part of our research is developing the lightweight machinery and electrical systems that will be required to make these systems possible.” This includes work at the base material level right down to wires and insulation, magnetic materials and semi-conductors.

Cheryl Bowman, a technical lead on the project, sees the big picture of what can be saved. “Considering that the U.S. aviation industry carries over 700 million passengers every year, making each trip more fuel efficient (by up to 30 percent) can have a considerable impact on the nation’s total use of fossil fuels.” 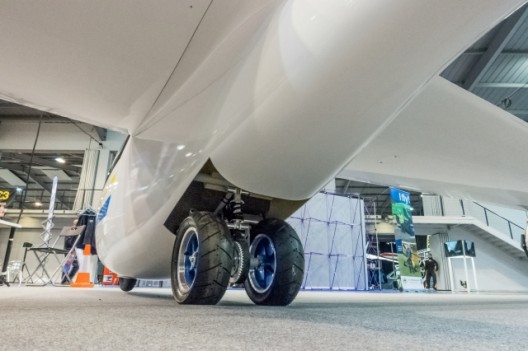 ProAirSport’s GlowFly landing gear – an electric motor aiding acceleration on the ground. Once in flight, the microturbine takes over

At the lighter end of the scale, ProAirSports’ Project Glow uses a hybrid approach that negates the slow acceleration one might experience with a small turbine, applying a seven-kilowatt electric motor to drive the landing gear wheels for a high-torque kick-start to the takeoff run. The Titan puts out about 88 pounds of thrust, enough for climb and throttled-back searches for thermals, while the motor provides enough urge for takeoffs from farm strips, according to Light Aviation, the publication of the UK’s Light Aircraft Association. Their judgement, “the acceleration really should be outstanding, in fact wheel spin could be an issue if power is applied too quickly.”

NASA’s depictions of considerably larger airlines show a conventional-looking machine with hybrid turbines under the wing and on the tail, probably benefiting from the added thrust a larger ducted fan could provide.  Cross-pollination of ideas for both large and small aircraft could lead to some interesting cross-over designs of different sizes. 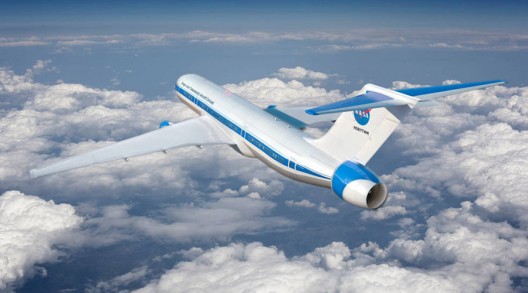 Modelers have been flying with microturbines for years, and even with micro turboprops, as shown by this “Ugly Stick” model from New Zealand.  Think of this coupled with an equivalent electric motor that would enable lower fuel use and thrust distribution where it could do the most good on this “draggy” craft.

This is a “medium” sized aircraft in terms of how big models get these days, and some European flyers are piloting twin-engine scale models of turboprop commuter liners. Their engines come in a great range of sizes, leading to that cross-over point where models engines become full-scale aircraft powerplants, much as with electric motors. Combining the best elements of both might be an interesting direction for not only NASA and the “big boys,” but for homebuilt craft that will one day no longer have 100-octane low lead to take them skyward.

Illustrating the size range in a very real way, a 1/2-scale model of a BD-5J seems terribly close to being able to take kids for rides.

And this full-scale version doesn’t seem that much larger.  One can see that adding an electric motor and gaining both thrust and fuel economy – similar to what NASA intends for larger birds – would be an exciting realm of research.