On Friday, December 3, Sonex Aircraft, LLC achieved a long-sought goal at Wittman Field, Oshkosh, Wisconsin, successfully flying their electric two-seater Waiex.  Unveiling their craft at the 2007 AirVenture on the same field as part of their E-Flight Initiative, the team quietly and with some back-to-the-drawing-board resolve worked for the next three years to solve the many problems that confront any group reaching for that elusive next best thing.  Evidence of this are the version numbers on the motor and controller as noted in Sonex CEO and General Manager Jeremy Monnet’s comment.  “We have also already started our motor v4.0 design and motor controller v12.0 to be integrated on N270DC. Many more great things to come on this project!” 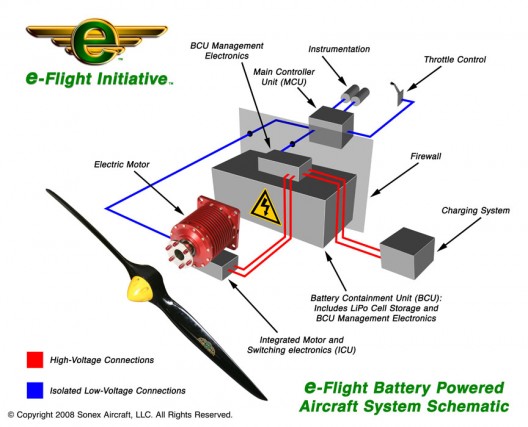 Having seen Peter Buck’s video of early testing at the Experimental Soaring Association’s fall workshop in 2008, in which the controller self-immolated (later found to be the classic loose wire scenario) this writer was impressed with the openness of the presentation and the reminder that such developments are never as easy as they appear.

John Monnet, Founder of Sonex, took first-flight honors, starting the motor and taxiing out to a sound not normally heard on the Volkswagen-based conversions the company sells.

Monnet shared his thoughts following the flight.   “Every first flight of a new aircraft or powerplant design is an interesting experience, but with N270DC more than any other aircraft we’ve built, I experienced just a glimpse of what the Wright Brothers must have felt like flying an unproven system for the first time. The flight was uneventful, as expected, but it represents a huge emotional victory for our team to check this item off the list.”

Besides casting a hopeful look into the future with news of planned version update, Jeremy Monnet shared the honors of the first flight with fellow group members.  “We are very proud of this achievement. The core design team of Pete Buck, Andrew Pearce, John Monnett, and myself would like to thank our staff, families, business partners, and friends in all of their help and understanding through this incredibly challenging project.”