Since Chip Yates hit the fastest time ever for an electric motorcycle up Pikes Peak last year, then pulled the UQM motor from the bike and installed it in his Long-ESA (Electric Speed and Altitude) record-setting flying test vehicle this year, other Pikes Peak EVs have demonstrated the benefits of their high torque power units.  Such performance shows the ready applicability of electric motors, with their uncompromised performance at altitude, as being great for hill climbers or aircraft.

Toyota, Mitsubishi, and several private individuals entered the 2012 Pikes Peak International Hill Climb, three finishing in the top 15 of all competitors. Scheduled for July, the hill climb had to be set back to August because of massive wild fires in the area.

David Herron reported in Torque News, “The top electric finisher, Fumio Nutahara, driving the Toyota Motorsports Group EV P002 electric race car. The EV P002 is built on a Radical race car chassis, and has pair of axial flux electric motors with a top output of 350 kilowatts, with a predicted top speed of 150 miles/hr. Their lap time was 10:15.380, for an average speed of 70.201 miles/hr, which was good enough for a 6th place finish.”

Hiroshi Masuoka drove the Mitsubishi i-MiEV Evolution to eighth place overall, averaging 68.479 mph on his 10:30:850 run – exceptional considering he had crashed in practice and the team rebuilt the car on site. 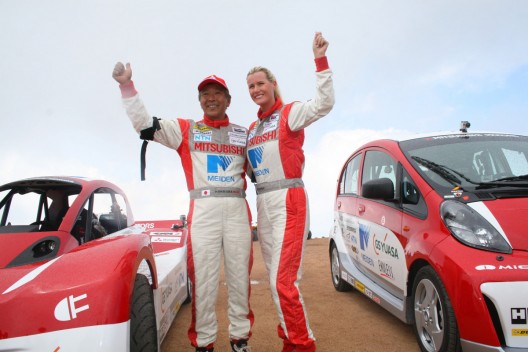 Elias Anderson in a NovaKar made the climb in a sub-second over 11 minutes with an average speed of 65.370 mph, running an 880 pound car with a 240 horsepower motor.

Not-so-mild-mannered Beccy Gordon, an accomplished race driver, took 126th place in a mild-mannered Mitsubishi i-MiEV, stock except for a roll cage and other accommodations to safety rules. She made it up the hill in 15:10.557 averaging 47.306 mph. As Torque News reports, “The purpose was to show that it could be done, and that they did.” Remember that this was a bog-standard urban commuter.

Nobuhiro ‘Monster’ Tajima had outstanding practice runs, but found smoke trailing his car after batteries started behaving badly one mile into his competition run. The video shows part one of his practice runs, to give some idea of the speed and the sounds of this wonderful vehicle.

Since EVs have been competing on Pikes Peak for only a few years of a 91-year history for this race, we can hardly wait for next year to see what new wonders transpire.