In the 1930’s, Henri Mignet energized the flying world with his Pou-de-Ciel (literally, Louse of the Sky), which bore the more common and somewhat cuter appelation, “Flying Flea.” Adherents to Mignet’s “formula” of tandem wings and simplified flying controls continue to produce variants on the formula. One of the most interesting is the Pouchel, an ultralight model popular in France with over 120 plans sets sold to members of APEV (Association pour la Promotion des Echelles Volantes – Association for the Promotion of Flying Ladders), which used a commonly available aluminum ladder as its basic fuselage structure. Because of the plane’s popularity and a fear of liability suits that might ensue, the ladder manufacturer asked the organization to forego using that readily available “fuselage.” Pouchelec relies on the same construction as that of the Pouchel Leger (Light), a riveted, ladder-like frame on which to mount the engine, wings or wing mounts, pilot’s seat, landing gear, and rudder. 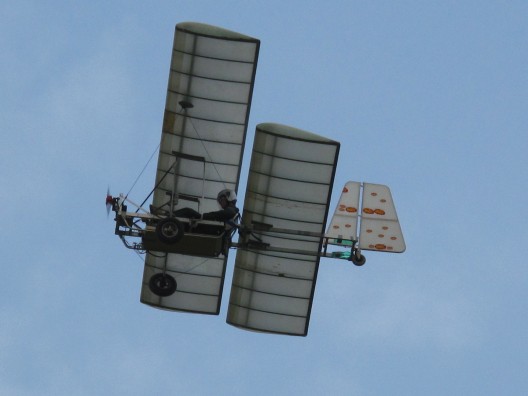 Pouchelec's ladder-like frame is apparent in the view from below

It’s a bit larger than other Pouchels, with a 7.3 meter (23.6 feet) span front wing and 5.3 meter (17.4 feet) rear wing. Both have a chord of 1.2 meters (3.94 feet). Pouchelec’s empty weight is a feathery 140 kilograms (308 pounds) with batteries sufficient for 17 minutes of flight. Daniel Dalby, who patented the basic Pouchel concept in 1997, and who was noted in our January 25 entry on Buselec 2, a student-designed electric two-seater, had the bright idea of using an electric motor on his creation after seeing a Swift hang glider powered by a SOLO 12-horsepower engine. He chose a PERM motor of 13 kW, but notes that had to wait eight years for the 36 kg (79.2 pounds) of Kokam batteries that would make flight possible. Having discovered that his motor was an energy hog (his phrase was “energivore”) Dalby enlisted the aid of personnel from APAME (Association Pour la Promotion des Aeronefs a Motorisation Electrique – Association for the Promotion of Aerial Vehicles with Electric Power) to provide a voltmeter and ammeter to monitor power and set the propeller for optimum climb. After several short hops, Dalby made the longer trip around the field shown in the video.

A second video dramatically illustrates the low noise level of Pouchelec compared to a Rotax-powered Pouchel. Dalby says that Pouchelec is sailplane-like in its dB level. Performance differences are accounted for by the mere 17-18 horsepower of the electric version, about a third of the output from the two-stroke powerplant.