Grenchen, Switzerland’s airfield hosted the fourth electric fly-in on that site over the weekend of September 11 and 12.  No fewer than 16 different electric craft flew in or were on hand to greet the lucky visitors.  Even celebrities were there, including Solar Impulse pilot Bertrand Piccard and Olympic champion, astrophysicist and pilot Dominique Gisin.

The Grenchner Tagblatt (daily news) was on hand to report on the proceedings, and seems to have come away impressed with the turnout and the technology.  The paper reported this sidelight on the recent record-setting trip from Switzerland to the North Sea of Germany in a Pipistrel Velis (also on display on the field). 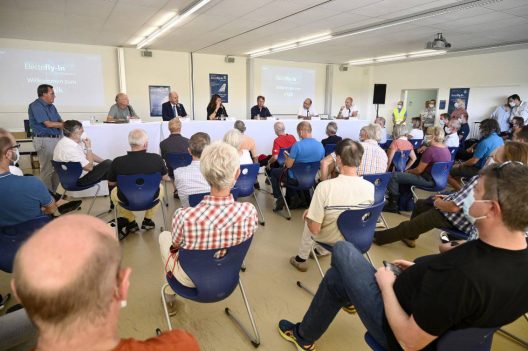 “Lush parties were celebrated almost everywhere, all under the sign of electromobility, which according to Westermann must be the only possible future. Incidentally, the record aircraft had also been brought to Grenchen and could be viewed at close range. An amusing detail on the side: Westermann said that despite enormous media coverage, around two thirds of the television teams simply missed their landing because nobody had heard them coming.”

That idea of electric aviation’s quietude was borne out in the Tagblatt’s reporting.  “Sunday there will again be a symposium of interesting lectures on selected topics in the field of electrically powered aviation and their future, as well as the presentation of further electric aircraft. These will also be seen – and not heard – in the air. Electric planes are extremely quiet. Dominique Gisin will also be giving autographs from 1 p.m. to 2 p.m.”  (And your editor is sure Bertrand Piccard obliged on request.) 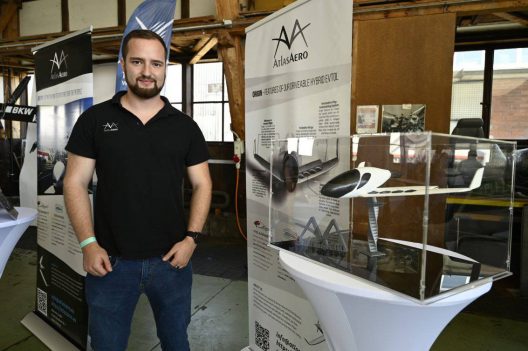 Two general symposiums and detailed talks by different participants gave participants a chance to take a deep dive into this new approach to flight.  Daily demonstration flights gave everyone a glimpse of the now and near future – including Bertrand Piccard piloting an Eck-Geiger ultralight trike.  For a small event, there was a lot to cram into two days. 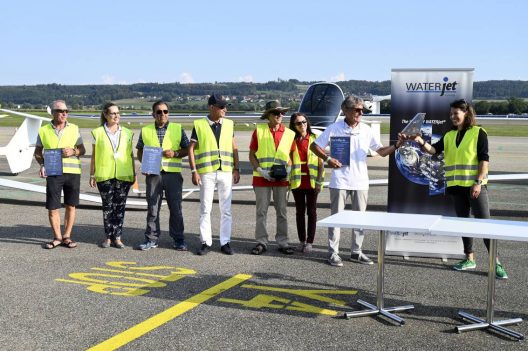 Awards, including first prize for the longest flight to Grenchen, were given out by Dominique Gisn. Here, Klauss Ohlmann receives his WATERjet trophy.  Eric and Irena Raymond, who flew their Sunseeker Duo from Italy, stand behind him

This event stays small, but seems to get better every year.  Next year, the weekend of September 11 and 12  will see event number five.