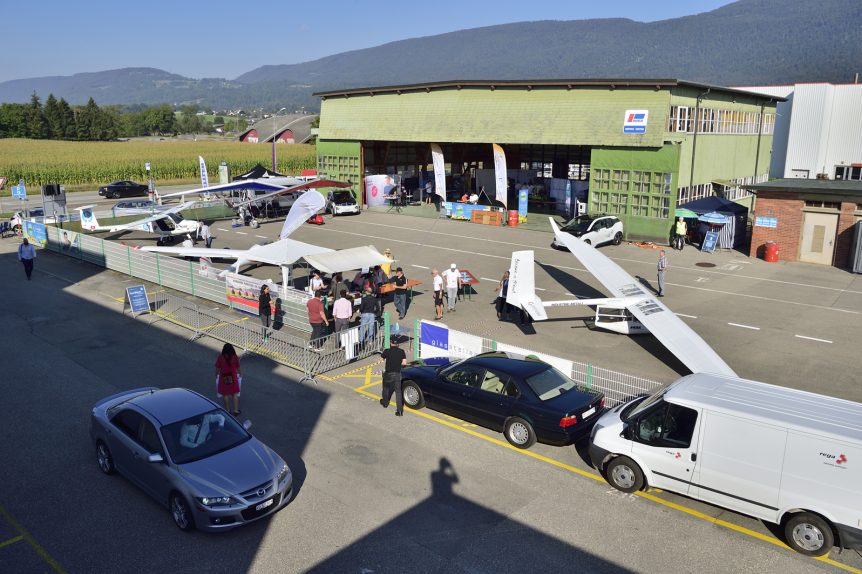 Electrifly-in, formerly the Smartflyer Challenge, is on for September 11 and 12, 2021, in Grenchen, Switzerland.  The event, even held in 2020 despite the pandemic, is a compact showing of the latest in electrical aircraft and technology.  Watch as this 2019 video as a Φnix (the Greek letter phi + nix –a clever bilingual pun) takes off, circuits the area and makes a landing – all the time flying with other electric aircraft.

In this flight, you can see the compact airport (including a grass landing strip) and a lovely setting for a great event.  Started as the Smartflyer Challenge* in 2016, the gathering has changed its name to be more inclusive.

From 12 to 50 Kilowatts and Beyond

Powering a large number of machines on last year’s flight line, Eck-Geiger Engineering makes a range of motors from 12 to 50 kilowatts in power.  On their web site, the firm lists over 30 different types of small aircraft powered by their motor/controller/battery packages.  These range from the ultralight, hydrogen-fueled La Mouette wing that Gerard Thevenot flew across the English Channel in 2009 to powered balloons and hybrid ultralight aircraft.  Many of these machines have made appearances at previous years’ events, and more are sure to be on hand this year.  Here we see a hang-glider “trike” powered by a 20 kilowatt unit.

And in another example, the Birdy motorglider flown by Toni Roth at last year’s event, the self-launcher flies on a mere 16 kW (21.6 horsepower).  All these and more could attend this year’s Electrifly-in.

Other manufacturers, including Pipistrel with their proprietary line of power systems, YASA, R0lls-Royce, MGM-Compro and others may provide insights into the future of battery and possibly hydrogen aviation power.

Last year, Eric and Irena Raymond showed up in their Sunseeker Duo, Klaus Ohlmann flew a Lange 20e self-launching sailplane, and Bertrand Piccard, co-pilot of Solar Impulse flew an ultralight and discussed   Ten years ago, Eric and Klaus flew the second-place winning e-Genius in the NASA Green Flight Challenge sponsored by Google.  They flew a 200-mile course around northern California and averaged 375.8 passenger miles per gallon, using the energy equivalent of a little more than a gallon of gasoline for the flight.  This kind of energy efficiency and economy will continue to draw attention to the new technology, now becoming entrenched.

Members of the record-breaking Pipistrel Electro Velis team were there for a discussion on electric aviation, just part of a larger symposium that provided a socially-distanced learning experience for all.  Speakers from government, industry and academia filled out the program.  Hangars full of displays and aircraft on the flight line helped make the two-day event a full one.  Your editor wishes he could be there this year, and it’s not too early to start making travel plans.

The people behind the Smartflyer hybrid touring airplane have kept the appellation for the craft, featured at past events on the Grenchen field.  This airplane should be on display at this year’s fly-in, and may have started flight testing by September.

Specifications (from their web site)

The specifications may change during the construction process.

This year’s Electrifly-in should be even bigger once travel restrictions are lifted.  Again, it seems like two days filled with a glimpse of future, green flight.