Flying Magazine, in its November issue, has its usual stunning photo review of this year’s AirVenture at Oshkosh, Wisconsin, but adds a three-page review of the electric aircraft that showed up at the fly-in.

Robert Goyer, senior editor, is enthusiastic about the planes he saw, and gives the largest number of column inches to Yuneec’s E-430 two-seater.  Goyer has reservations about the aircraft’s performance and limited range, and turns to another Yuneec-powered craft, Tom Pehigny’s FlightStar e-Spyder, propelled by a 27 hp, single-battery pack system, with the assessment that this type of craft seems more suited to electric power in its current state of development.  Although Pehigny admits restrictions in terms of range so far, he “does point out some benefits we can see already. The e-Spyder…is whisper-quiet, smooth-running, dirt simple to start and smoke and odor-free.”

Goyer includes a brief note on Randal Fishman’s Electra-Flyer C and new two-seater X, but gives little detail on either.

Goyer foresees a “flood of battery research and development” on its way, and closes by predicting, “One thing is for certain: AirVenture has not seen its last electric airplane.”

Let the education begin. CAFE has its work cut out for it, with a skeptical classroom awaiting schooling. 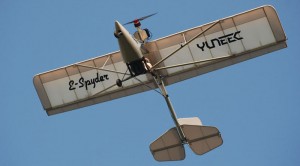