With recent news of a solid-state battery coming for the labs of Yi Cui, a second solid-state solution seems to follow from another Stanford Laboratory.  The All-Electron Battery, funded at least partly by an ARPA-E grant that underwrote the program from 2010 to 2012, has fostered a startup, QuantumScape.

Starting from the stated need for a battery “with twice the energy storage of today’s state-of-the-art Li-Ion battery at 30% of the cost,” ARPA-E worked with the premise that Stanford was “developing an all-electron battery that would create a completely new class of energy storage devices for EVs. Stanford’s all-electron battery stores energy by moving electrons rather than ions. Electrons are lighter and faster than the ion charge carriers in conventional Li-Ion batteries. Stanford’s all-electron battery also uses an advanced structural design that separates critical battery functions, which increases both the life of the battery and the amount of energy it can store. The battery could be charged 1000s of times without showing a significant drop in performance.”

The proposal’s Impact Summary noted that, “If successful, Stanford would create an entirely new class of EV batteries capable of storing much more energy than traditional Li-Ion batteries, facilitating widespread EV use.” 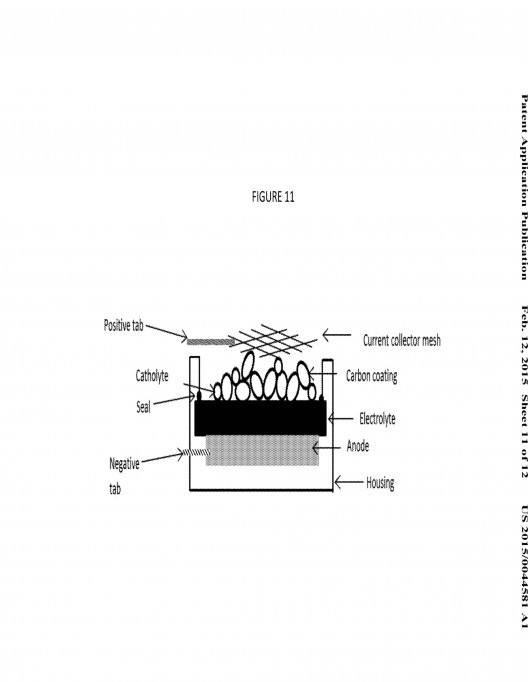 Stanford’s patent drawing shows encapsulated layers with solid electrolyte and catholyte, an electrolyte surrounding the cathode, and which should be a solid, rather than liquid material

As reported here last year, QuantumScape, despite the lack of substantive material on its all-too-reticent web site, attracted the attention of Volkswagen, which according to Bloomberg, will decide to go forward with more than a five-percent interest in the startup company.

“Volkswagen AG plans to decide in the first half of this year whether new battery technology under development at U.S. startup QuantumScape Corp. is ready for use in its electric cars.

“’The technology’s potential to boost the range of battery-powered vehicles is compelling and tests are progressing,’ VW Chief Executive Officer Martin Winterkorn said outside a press conference in Stuttgart, Germany, on Tuesday.

“’I was there last year,’ Winterkorn said. ‘Progress has been made,’ and the company will be able to determine how to proceed by July.”

As with all other automakers in the EV marketplace, VW needs to achieve Corporate Average Fuel Economy (CAFE) standards in America, and rigorous CO2 and other emissions requirements in the European Union.   Despite lagging electric car sales, the carmakers need to press on to avoid penalties and meet ever tougher goals.

Bloomberg reports that Winterkorn said in November that he sees “great potential” in the new power-storage technology, with up to 700 kilometers (430 miles) range for unspecified VW models, more than three times that of the electric version of the VW Golf.   This would be half again as high as Tesla’s advertised Model S range of 270 miles.

Since QuantumScape’s web presence includes only pretty pictures and some contact information, speculation abounds on what’s in the potential VW battery package.  Professor Doctor Winterkorn’s address at the Science Award for Electrochemistry ceremonies on November 6, 2014, gives some clues as to why VW is interested.

As noted before in this blog, Winterkorn highlighted VW’s massive research and development investments.

“At our Group we have some 44,000 R&D experts in 20 countries.   We are spending roughly 13 billion Dollars on R&D – each year.  And we are making sure that all the relevant drive-train technologies are as efficient and economical as possible. Including, of course, our combustion engines which have great potential.”

Some of that potential seems to be near term, and other elements might be further in the future.  The structure of his talk makes it difficult to define the actual timeline, other than a few tantalizing hints.

“Take energy density, for example: Increasing the specific energy of lithium-ion cells to as much as 380 Wh/l will reduce driving range drawbacks. With a higher nickel content (editor’s italics), much more will be feasible. But we also need to intensify basic research into batteries with an even greater specific energy, such as solid-state batteries. I see great potential in this new technology, possibly boosting the range to as much as 700 kilometers (1,000 Wh/l).  Another matter is cost: Lowering the price of battery cells to 100 euros per kilowatt hour would significantly increase the market potential of electric vehicles.  And if we also improve reliability and battery lifespan, customer acceptance will grow fast.”

Several questions arise from his remarks.  Why is the reference to higher nickel content important?  Will this be part of a 700-kilometer battery?

Cleantechnica.com speculates about QuantumScape’s offerings.  Founded by Stanford researchers in 2010, the company’s lithium batteries focus on fundamental disruption in the energy storage sector (italics theirs).  Offerings might be commercial versions of all-electron batteries developed by Dr. Frederich Prinz and his team, with leadership by CEO Jagdeep Singh, described by Cleantechnica as “a Silicon Valley rock star,” with a “solid track record in cutting edge tech.”

Prinz’s work with an “all electron battery effect,” related “to the use of inclusions embedded in a dielectric structure between two electrodes of a capacitor. Electrons can tunnel through the dielectric between the electrodes and the inclusions, thereby increasing the charge storage density relative to a conventional capacitor.

Another patent describes the use of antiperovskite materials, those sharing a crystal structure similar to naturally occurring perovskite, a calcium titanium oxide.  According to the patent, “The formation and use thereof of antiperovskite material enables a metallic lithium anode, which increases the capacity and therefore the energy density of any lithium-based electrochemical storage device.”

This adds up to a battery with a solid-state electrolyte rather than a conventional liquid electrolyte.  Such batteries could be more energy dense and much safer, not being loaded with flammable liquids.  They could also survive thousands of charge-discharge cycles.  VW looks to hit a 100 euro per kilowatt-hour goal for such energy storage.  If Prinze, QuantumScape and VW can all come together (remembering Dr. Winterkorn’s  promised decision by July) this might lead to exciting battery developments in Silicon Valley on an aggressive schedule.