Since last August at AirVenture 2014, Elytron Aircraft, LLC has made great progress.  The aircraft on display at Oshkosh last year was promising, but about half finished.  The completed two-seat, proof-of-concept (POC) airframe shown March 3rd through 5th this year at the HAI Heli Expo in Orlando, Florida seems ready to go and remarkably light at its 1,100 pound design goal. Elytron lists the following component advances for the last seven months, including completion of: 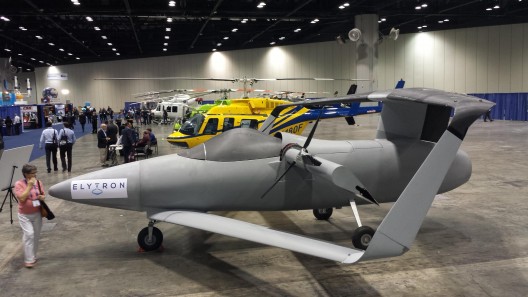 Its maiden flight is scheduled for mid-2015, with a full transition in and out of VTOL mode by the end of the year.

Not content to show just a two-seat technology demonstrator, Elytron revealed its new design for a 4-seat executive transport and air taxi aircraft at the Heli Expo. This design is based on a 1,075 sHP turboprop engine and, according to Elytron, will be capable of cruise speeds up to 316 mph.

The 4S will provide VTOL capabilities, fast transport for four in cabin comfort

Elytron’s 10-seat design is configured to carry personnel to offshore oil and gas deep water platforms at cruise speeds of 414 mph, more than twice as efficient as existing helicopter-based solutions. With a dual turboshaft configuration for a total of 4,000 sHP and a range of 1,295 nautical miles, this would provide rapid transit and vertical takeoff and landings. Oliver Garrow, co-founder and Chief Technology Officer for Elytron, reports that Elytron is evaluating the feasibility of using existing airframes to build initial prototypes for the 10-seat aircraft as a means of accelerating development, and extending its design concept to include unmanned platforms (drones).

10S, the largest model so far in conceptual design, would carry 10 at 414 mph

Elytron was founded in 2013 with Gregory Bruell, programmer and executive, as CEO and Co-Founder along with Oliver to provide a faster, safer, and a longer-range alternative to helicopters for the oil and gas, emergency medical services, and air taxi markets. Oliver worked on the design concept over a 10-year R&D period during which he conducted experiments were conducted with 1/4th scale convertiplanes models on Moffett Field.  Testing included full-size airframe modeling, extended flight, and computational fluid dynamics (CFD) simulations. The popular Verticopter flying-wing design with in-wing propulsion was the most successful of these prototypes but still had aerodynamic limitations. In 2012, Oliver created the new and optimized wing configuration to address all of the earlier design limitations.

As explained by Oliver, “The Elytron aircraft architecture combines three sets of wings: one pair of rotary wings called ‘proprotors,’ mounted along a single tilt-wing in a central position, and two joined pairs of fixed wings. The plane has superior glide ratios and low stall speeds because of its low wing-loading design, and also displays excellent Short Take-off and Landing (STOL) capabilities.”

Elytron aircraft are claimed to be capable of achieving airspeeds two to three times those of equivalently powered helicopters. The airframe has also been optimized for low drag at the higher airspeeds due to its unique distribution across 3 sets of wings. Stall performance is claimed to be very safe as it borrows from airframes using a front wing with canard-type stall response. Fixed wing planes are also far more fuel efficient than rotary wing aircraft, reducing operational costs and increasing range. The combination of the speed of a fixed wing plane and the vertical take-off of a helicopter will allow for applications such as air taxi from city-center to city-center.

The Elytron mechanism for controlling the plane during vertical flight has far fewer parts than helicopter swash plates. Elytron’s design has no complex hub but instead distributes the parts across the tilt-wing, making them lighter and easier to inspect and maintain, according to Oliver. All of the tilt-wing actuators have redundant control. In the case of engine failure, the airframe’s superior glide ratio will eliminate the need for autorotation, which is a requirement in any helicopter.

The anticipated benefits of the unique configuration and its promised performance are essential to the success of the new company.  Best wishes to Oliver and Greg in this endeavor.