This isn’t Brian Carpenter’s first time at the small airplane rodeo.  He’s built at least a dozen aircraft, designed several from scratch, and even entertained the hosts of TV’s Mythbusters series with a series of rides in his team’s ultralights.

His latest creation at Tangent Aircraft is a sleek Part 103 ultralight that seems to break or bend the rules on several fronts, presenting a twin-pivoting-motored, Fowler-flapped, retractable-gear craft that would seem to be too complex to fall into legal 103 status – or even into something the average novice private pilot would be allowed to fly.  The 36-foot span and 105-square-foot wing would seem too fast to meet stall limits. 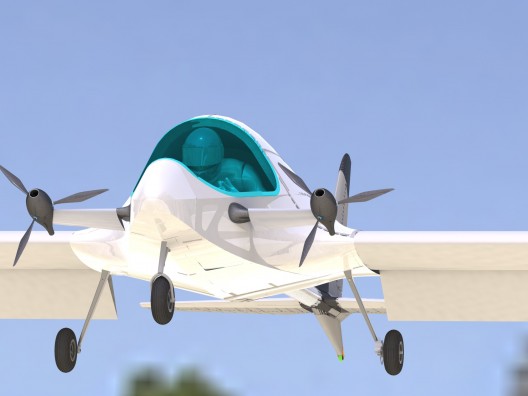 Carpenter explained his design philosophy to your editor a few days ago, and he said the greatest challenge of meeting part 103 regulations was attaining the stall speed requirement with the small wing area.  Normal, unflapped ultralights need about 140 square feet to meet the 27.6 mph stall speed.  The Fowler flaps manage to lower the speed, but while causing extreme pitching moments on the small craft.  To help counter that, Carpenter pivots the two Plettenberg Predator 37 motors, which give downthrust to the nose and help short takeoff performance. 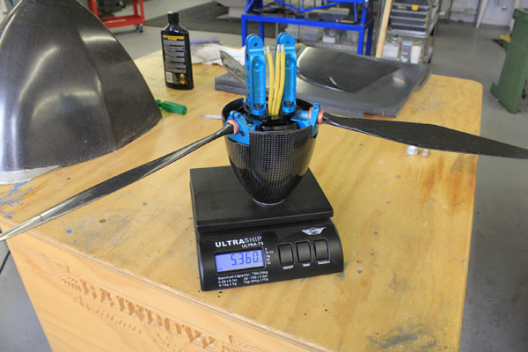 Plettenberg Predator motor with spinner, propeller and mount, weighing in at less than 5.5 pounds

He also points out that for demonstration of the airplane’s flight characteristics, “Initially we will only have to demonstrate that the aircraft is capable of flying at these speeds. There is no requirement that the aircraft actually be operated during normal operations in this configuration.”

This may seem like parsing the jots and tittles of the law, but many “heavy” ultralights skated over these very issues with no harm and no foul called.

Though very different in approaches, it is instructive to compare Carpenter’s EMG-5 with Dale Kramer’s Lazair ultralight converted to Joby Motor power and amphibious operation.  Both airplanes use 100 pounds of lithium batteries and are powered by twin electric motors putting out around 15 kilowatts.  Both have all-metal structures, with the exception of the foam ribs in the Lazair and some carbon fiber fairings on the EMG-5.  Both, with careful analysis and interpretation of what the rules actually say, fly within Part 103 constraints.

The Plettenbergs are “outrunners” meaning the rotor spins about the central stator, which is mounted to the arm that pivots from each side of the nose of the aircraft.  Each motor’s propeller is mounted to the spinning rotor, with motor and propeller hub covered by a streamlined spinner.  Electric connections come though the stator’s hub.

Each motor is capable of producing 99 pounds of thrust, helping the ultralight’s short takeoff and landing characteristics.

Construction pictures on the web site detail the carefully-thought out design, especially the swiss-cheese-like structure surround the prone pilot’s position.  This is no problem for Carpenter, who is a hang-glider pilot and accustomed to fly that way.  The airplane includes windows in the bottom of the fuselage to allow views straight down, and the visibility forward and to the sides will be obstructed only by the pilot’s helmet.  A ballistic parachute will bring the whole airplane down safely in an emergency, allowing the prone pilot to stayh in the protective roll cage. 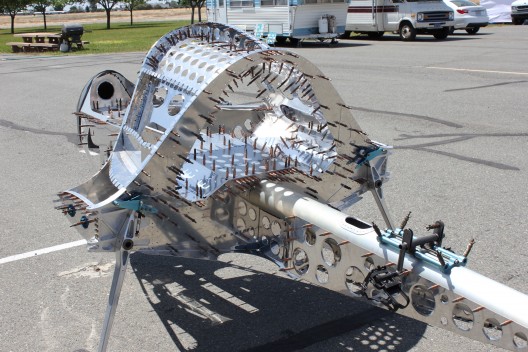 The airplane can be towed aloft with a car, with motors used as sustainers for short gliding flights.  This would allow smaller, lighter battery packs.  A customer could expand battery capabilities as finances allowed and end up with a fully-charged airplane that could fly over one-and-a-half hours on a complete battery pack.  Aero tows are also possible, giving the EMG-5 a flexibility of operation not always enjoyed by ultralights.  As desired, the airplane can expand its performance capabilities and weight into the Experimental category, although that will require a license and medical certificate.

The airplane is highly attractive, and has so many features that it’s best to review these on the project’s web site.  Workmanship on the prototype is at a high level, and CNC-machined aluminum landing gear legs reflect an aesthetic that highlights the project.  As numbers increase for flying products, Carpenter will offer budget alternatives, such as chrome-moly steel landing gear assemblies. 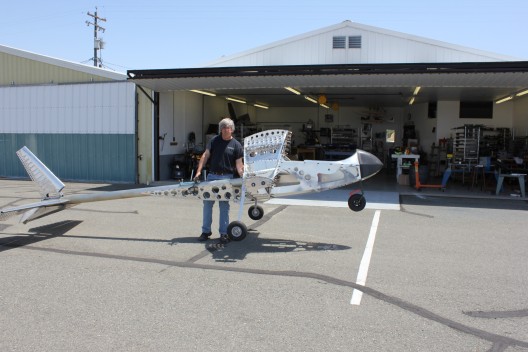 Despite all the features, it is an ultralight

The airplane is meant to reach a $20,000 price point, with free plans available on line, much like those for Mike Sandlin’s Basic Ultralight Gliders.  Builders can fabricate as many parts as they are competent to make, but Brian will provide parts or complete kits as needed.  He wants to demonstrate a different business model, keeping costs down and completions up.

Carpenter’s future plans for the craft show the breadth of his vision:

Interest in the new design is intense, with over 80,000 “hits” on the web site in May and a three-part interview by EV World on line drawing attention to the aircraft.

Readers can see the EMG-5 and hear Brian Carpenter’s presentation at AirVenture 2012 in Oshkosh, Wisconsin.  The airplane will be on display in Innovation Hangar A, quickly filling up with the latest in aeronautical thinking.