Hearing of E. coli outbreaks usually makes us reconsider our fast-food dining choices.  Other possible, friendlier uses for the pesky bacteria, though, could show the way to clean energy production, making a “gasoline-like biofuel,” according to Harvard Medical School and Wyss Institute researchers.

According to Harvard’s news release, “New lines of engineered bacteria can tailor-make key precursors of high-octane biofuels that could one day replace gasoline, scientists at the Wyss Institute for Biologically Inspired Engineering at Harvard University and the Department of Systems Biology at Harvard Medical School report in the June 24 online edition of Proceedings of the National Academy of Sciences. 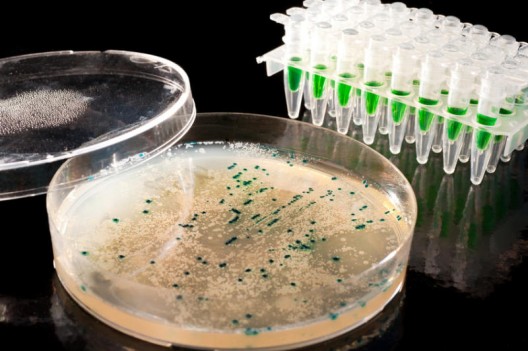 Harvard Medical School and the Wyss Institute team up to put a petri dish in your petrol tank: engineered microbes may become high-octane fuel

“’The big contribution is that we were able to program cells to make specific fuel precursors,’ said Pamela Silver, Ph.D., a Wyss Institute Core Faculty member, Professor of Systems Biology at Harvard Medical School, and senior author of the study.”

Gasoline has yet to be knocked off its top-fuel pedestal because synthetic, cleaner alternatives are often less powerful.  Ethanol, for instance, has only two-thirds the energy of gasoline.  Gasoline also works in a wide range of climates, hundreds of millions of vehicles run on it, and a world-wide distribution network already exists for it.  So although we are choking on fossil-fuel fumes, we have yet to find a totally satisfactory replacement.

Silver and her team are using E. coli to make fatty acids, “energy-packed molecules containing chains of carbon atoms flanked with hydrogen atoms that can be easily converted into fuels.”

Joe Torella, Ph.D., and Tyler Ford, Harvard Medical School Systems Biology graduate students in Silver’s laboratory and the paper’s lead coauthors, rerouted the metabolic pathway that makes fatty acids in E. coli bacteria and transformed them into an eight-carbon fatty acid called octanoate that can be converted into octane.

Best of all, they mass produced this octoanate from sugar, fed it to the bacterium and tricked it into producing only eight-carbon-long chains fatty acid.  After a first strategy failed, being too expensive to allow commercial production, the scientists tried a second strategy that could be scaled up more readily and obtained the high yields of octanoate.

“Sustainability is one of the biggest problems we face today, and developing potent biofuels to replace gasoline is a major challenge in the field,” said Don Ingber, M.D., Ph.D., Wyss Institute Founding Director. “Using ingenious synthetic-biology strategies to engineer microbes so that they can produce octane, Pam’s team has taken a giant step toward meeting this challenge.”

Next, the scientists plan to engineer E. coli to convert octanoate and other fatty acids into alcohols, potential fuel molecules themselves, and just one chemical step away from octane.  The same processes can be used to produce “precursors of pharmaceuticals, bioplastics, herbicides, detergents, and more,” according to researchers.

This work was funded by the Department of Energy’s Advanced Research Project Agency-Energy (ARPA-E) and by the National Science Foundation. In addition to Silver, Torella, and Ford, the research team included Scott Kim and Amanda Chen, students on Silver’s team, and Jeffrey Way, Ph.D., a Senior Staff Scientist at the Wyss Institute.

Biochemist Stephen del Cardayre is LS9’s vice president of research and development and happy with the firm’s progress. “We started in my garage two years ago, and we’re producing barrels today, so things are moving pretty quickly.”

The company observes that people have used bacteria and yeast for centuries to create beer, moonshine and ethanol but that genetic engineering allows scientists to engineer a desired end product.

Del Cardaye adds, “So these are bacteria that have been engineered to produce oil.  They started off like regular lab bacteria that didn’t produce oil, but we took genes from nature, we engineered them a bit [and] put them into this organism so that we can convert sugar to oil.”

The company is focusing on diesel fuel, but the microbes can be “programmed” to make gasoline or jet fuel.

With academia and private enterprise closing in on means to make commercially viable, mass-produced biofuels from the same germ of an idea, perhaps we’ll see an unloved bacteria finally get some respect.