Unhappily, we missed seeing Tom Leite at this year’s Electric Aircraft Symposium. Happily, he was at Eurosport Aircraft, his company in Portugal, working on innovative new approaches to making electric and hybrid motor-gliding a reality. He also has a speedster that would give those who desire rapid transit a high-style alternative.

As shown in the video from Aero Friedrichshafen, the Crossover will probably trend toward a simpler wing configuration, with a fixed span of 18 meters (59 feet) and flaperons that will replace the multiple flaps on the current short-span version being flown in test flights. 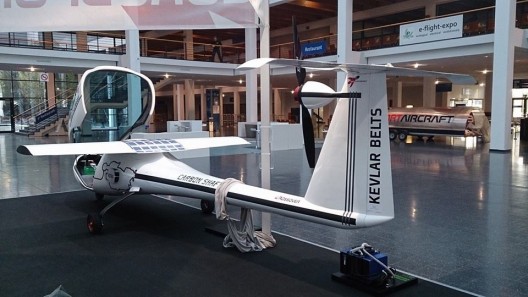 It’s uncertain whether the current twin-motors that pop out of the sides of the extremely slender fuselage will be retained, but a new version of the Crossover will feature three power options. As shown at Aero 2014, the airplane has the two options outlined on opposite sides of the fuselage – the port side displaying the Rotax-powered version, with a carbon-fiber shaft transmitting power from the engine to Kevlar belts that transfer the power to the tail-mounted propeller. The shaft is produced in collaboration with Best Composites in Germany, who seem to have mastered the art of making a long cantilever tube impervious to flexing and breaking while transmitting power to a folding propeller.

This aerodynamic configuration provides low drag under power and has been used on e-Genius and Stuttgart University’s Icare’ 2 solar-powered aircraft.

The starboard side has red outlines showing the hybrid version of the aircraft, with the engine driving an electrical generator, which passes its current through a frequency controller that makes the tail-mounted motor spin at a desired speed. 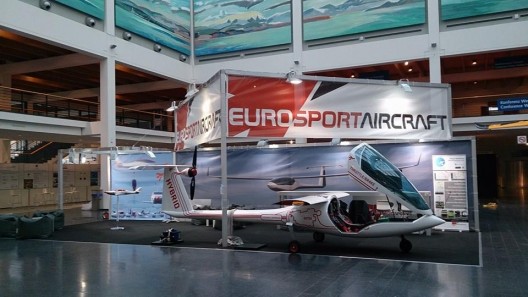 A third possibility would be to have just the motor, with batteries in the aircraft’s wings providing the motive power, somewhat like the arrangement on an Antares or Arcus.  The motor in either hybrid or pure electric versions will probably be an Emrax designed by Roman Susnik.

The new Crossover will have a 15 or 18-meter wing, probably manually changed with wing-tip extensions – a simpler, lighter approach than previously envisioned. As it is, even the longer span craft fits into Light Sport Aircraft territory, with its creators saying, “The light weight airplane combines characteristics of an ultralight and a glider, making it unique.” Its 297 kilogram (654 pound) empty weight is less than that of an early Piper Cub, but its long wings allow a best glide ratio of 44 to 1. It can cruise at 200 kilometers per hour (124 mph) at a low throttle setting, making it possible to exploit its batteries to their fullest extent in full electric or hybrid mode.

The video helps highlight the roomy cockpit, ease of entry and elegant extras like the electrically-adjustable rudder pedals and ultra-thin, pad-based instrumentation. We seem to get further from the traditional concept of a two-seat sport aircraft every day, getting more performance from smaller powerplants, and benefiting from creative approaches that companies like Eurosport Aircraft provide. You can keep up with their current activities on their Facebook page. 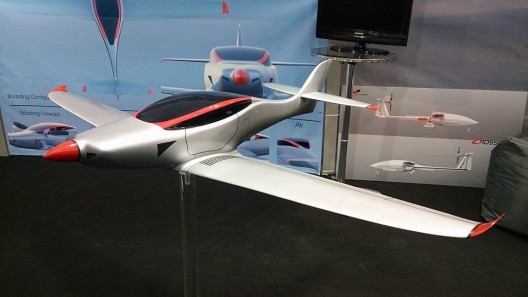 In yet another excursion into creative aerodynamics, Eurosport introduced its Speedster concept at Aero 2014.  It can be powered by a Rotax or ULS engine, and might even be available with Lamborghini-like doors.   As with everything that Eurosport does, it’s open to a series of highly creative decisions.