Eva Hakansson and Bill Dube’ are a husband-and-wife team with a deeply-felt need for speed. Bill races Killacycle, only recently unseated as the fastest electric drag racing motorcycle in the world, capable of seven-second, 170 mph quarter-mile times and speeds. His zero-to-60 time is under one second, somewhat like an aircraft carrier launch in terms of acceleration and the accompanying forces.

Eva now holds the record for the world’s fastest electric sidecar motorcycle – beating her previous record on the Bonneville Salt Flats. A sidecar in this case is a two-wheeled, streamlined two-wheeler with an outrigger, but not a rider, as on a traditional sidecar.

In-cockpit videos show the finesse with which Eva keeps Killajoule on the straight and narrow with the only indicators of speed being the course markers flicking by.

Here you can enjoy their light-hearted banter about the very serious endeavors in which they invest their considerable intellects and skills.

Eva builds the battery packs for their vehicles, including the one shown in the short video below. What takes a little over 40 seconds in the video consumes over an hour of exacting work in real time. As the notes to the video explain, there are still 23 more modules to go.

Eva and Bill work closely with A123 batteries and wanted to use “A123” as Killajoule’s racing number. Organizers did not allow characters other than numbers, so the sleek machine races as “123.” 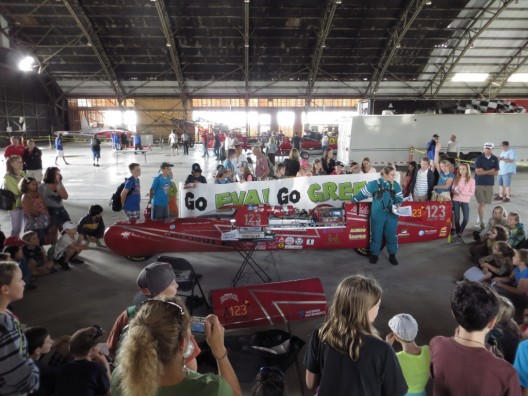 Eva is also a big favorite with students of all ages, letting them know that she owes her exciting life to her abilities with mathematics, science and technology – then encouraging them to work hard in school. Who knows what dreams she and Bill have inspired in young minds?

It should also inspire those working to achieve electric aviation, and all research and development in any vehicular field helps bring that ideal closer.