Dr. Paul MacCready repeatedly urged us to do more with less, getting big results from modest use of materials.  That philosophy may be upheld yet once again by researchers from the Helmholtz-Zentrum Berlin (HZB) Institute of Soft Matter and Functional Materials.

As reported here many times, people like Dr. Yi Cui at Stanford University, researchers at MIT, the Fraunhoffer Institute in Germany and many others are attempting to find the magic combination of ingredients that will allow us to transcend the weight penalty we currently trade for payload in heavier-than-desired electric aircraft. 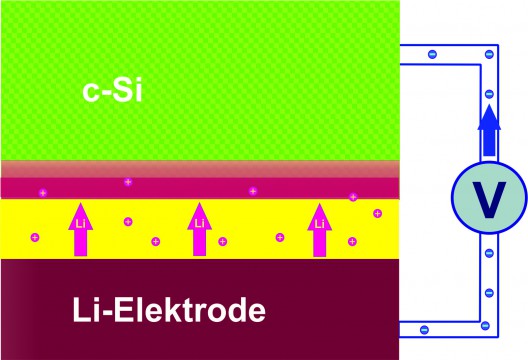 Lithiation in HZB cell, with majority of lithium ions adsorbed in thin layer closest to electrolyte boundary layer.   Lithium ions migrate through the electrolyte (yellow) into the layer of crystalline silicon (c-SI).  During the charging cycle, a 20-nm layer (red) develops on the silicon electrode, adsorbing extreme quantities of lithium ions. Illustration: HZB

Scientists at the HZB, led by  by Prof. Matthias Ballauff have directly observed for the first time a lithium-silicon half-cell during its charging and discharge cycles.  Dr. Beatrix-Kamelia Seidlhofero carried out the experiments using the neutron source located at the Institute Laue-Langevin in Grenoble, France.  She explains, “We were able to precisely track where the lithium ions adsorb in the silicon electrode using neutron reflectometry methods, and also how fast they were moving.”

This precision allowed the team to see how lithium ions “migrate” into thin films of silicon – often the center of experiments to increase the energy stored in lithium batteries.  Researchers determined the energy storage capacity of lithium-ion batteries “might be increased by six times” by using silicon instead of graphite in the anodes.

Substantiating the idea that “less is more,” Dr. Seidlhofero found that, “Lithium ions do not penetrate deeply into the silicon. During the charge cycle, a 20-nm anode layer develops containing an extremely high proportion of lithium. This means extremely thin layers of silicon would be sufficient to achieve the maximal load of lithium.”

Since 20 nanometers equals only 0.0000000787 inches, the material layer is extremely thin, and the materials needed to react with it are exceedingly small.  Dr. Seidlhofero found two different zones on the test electrodes, with the action taking place close to the surface.  Near the boundary to the electrolytes, the 20-nm layer showed extremely high lithium content, with 25 lithium atoms lodged among 10 silicon atoms.  A second, adjacent layer contained only one lithium atom for 10 silicon atoms.  Both layers combined are less than 100 nm thick after the second charging cycle, according to researchers.

Materials such as graphite used in many batteries can only “stably adsorb” a small number of lithium ions during charging.  Silicon can adsorb many more ions, but tends to crack under stress.  This stressing and relaxation eventually causes electrodes to crumble and batteries to fail.  Other researchers have tried a variety of fixes for this problem over the last several years.

In HZB’s testing, after discharging the battery, the team found about one remaining lithium ion per silicon node in the electrode’s silicon boundary layer exposed to electrolytes.  The fact that most of the activity takes place at a surface level might prevent flexing and cracking at deeper levels, but that’s just your editor’s shallow surmise.

The Institute adds a grace note that “very thin silicon films should be sufficient for adsorbing the maximum possible amount of lithium, which in turn would save on material and especially on energy consumed during manufacture – less is more!”

Certainly a 6X battery, all that much lighter for the same level of energy, would be heaven-sent as far as aircraft are concerned.