Volocopter has evolved from a pilot sitting on a Pilates ball surrounded by multiple model airplane motors to the VC200 – the first Volocopter to carry two people, according to parent company e-volo.  As recipient of a 2 million euros grant from the federal ministry of economics and technology, e-volo has worked with a research and industry syndicate to craft the VC200. 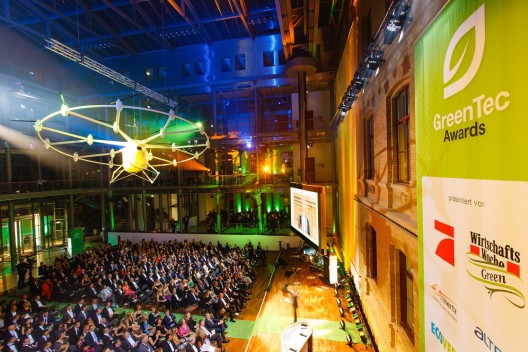 A sleeker, more finished-looking project than the original flight vehicle, the VC200 held pride of place 15 meters above the crowd attending the “GreenTec Awards” in Berlin, Europe’s largest environmental and economic prize.  Completed just in time for the event, and assembled in the auditorium where it received its award, the first prototype of the VC200 was an ever-present reminder of its green credentials. 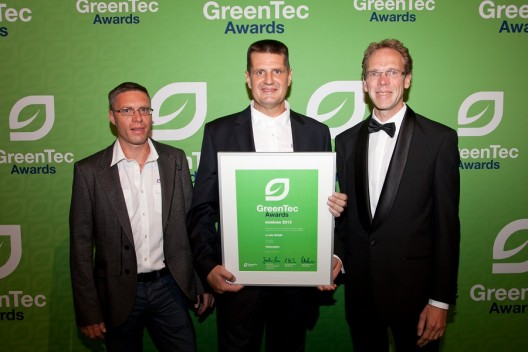 Although the little “David” company earned a second place award, with “Goliath” Airbus taking top honors, “We are proud that we are placed tightly behind a global player such as Airbus,” said e-volo-CEO Alexander Zosel: “The decision of the judges is absolutely comprehensible for us. The soon-to-be-expected CO2 savings through the use of fuel cells in large passenger aircraft is a great thing.”  The last sentence refers to Airbus’ use of fuel cell powered auxiliary power units (APUs) in its electric nosewheel taxiing system, and for planned future applications of fuel cells.

Federal Environment Minister Peter Altmaier shared the makers’ enthusiasm, saying, “This green aircraft is a perfect blend of German engineering and innovative ingenuity.”  Even the hostess for the black-tie ceremony, Nina Eichinger, was moved to comment, “The Volocopter was the undisputed highlight of the awards show. The Volocopter is not only absolutely novel, it is very stylish.”

Refreshed from their new-found fame and back at the factory in Bruchsal, the team is concentrating on making the first test flights this year, following structural and endurance tests on the passenger cabin, landing framework and the rotor array, which is a set of cleverly modularized components.  The craft will fly with a provisional airworthiness certificate following the tests.

Test flights at the DG Flugzeugbau (Volocopter’s builders at least partly because of their experience with carbon-fiber airframes) will lead to prototype certification of the VC200 as part of a newly created category of ultralight rotorcraft that can be flown by holders of a private pilot license.

e-volo aims for the following performance:

Because current battery technology limits flight time to an anticipated 20 minutes, e-volo is developing a range extender that would use an internal combustion engines in a serial hybrid configuration to power a generator that would supply the craft’s batteries and motors with electricity.  In a hoped-for near future, better batteries would allow an hour’s endurance without the complication of mechanical assistance.

With a sophisticated control system to control the many rotors and make flying uneventful for novice pilots, software will be as important as hardware in this machine’s success.

Traditional helicopters are noisy, precluding their use in projected pocket airparks.  Zosel explains, “The noise signature will be lower than a helicopter. But we don’t have a serious measure of the whole system setup of the VC200.  We will do that after our maiden flight….“