Israel’s Eviation has moved its manufacturing resources to Arlington, Washington, north of Seattle.  There, they are making an all-new version of Alice, changing its configuration from “V”-tailed to “T”-tailed and its power from tri-motor to bi-motor. 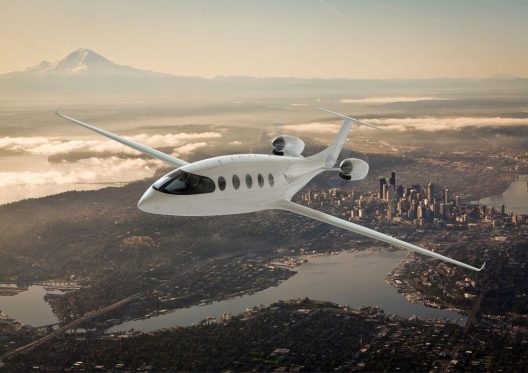 Charles Alcock, reporting in FutureFlight.aero, says Eviation Aircraft confirms plans to make a first test flight of the redesigned craft by year’s end and have the new Alice certified and entering service in 2024.

Obvious changes include a clean, high-aspect ratio wing and pylon-mounted motors flanking the “T” tail.  According to Alcock’s report, a company spokeswoman explained, “We moved from a V-tail to a T-tail to optimize performance and handling and make it easy and reliable for pilots to seamlessly transition to flying the aircraft.” 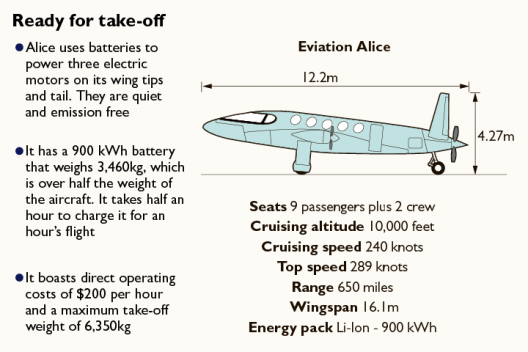 Two crew members will fly (and probably host) the “up to nine” passengers on trips up to 440 nautical miles (506 statute miles or 814 kilometers) at speeds “just over” 250 mph (402 kilometers per hour).  Numbers are lower than previous specifications (748 statute mile range, 299 mph cruise), but still viable for regional flights.

The original design had an 820 kilowatt-hour battery weighing 8,200 pounds or 3,719 kilograms – 60-percent of the craft’s maximum takeoff weight.  That would be only 49 percent of the current design’s 16,500 pounds.  Passengers account for 2,400 pounds in the current design and the two motors 440.9 pounds (200 kg.) each.  That leaves 13,218 pounds for propellers, two crew members, airframe and batteries.  Counting the loss of one motor (let’s say 500 pounds with propeller), one wonders how the weight is built up in the current version.

Since its original prototype was destroyed in a ground-power-unit fire at its test site in Phoenix, Arizona, Eviation has evidently been modifying its original design to the version we now see.  It has also moved its operations to several hangars at Arlington airport in Washington State, where it’s spent “at least” $300,000 renovating the buildings.  Motor-maker magniX is only 14 miles away in Everett, also home to Boeing. 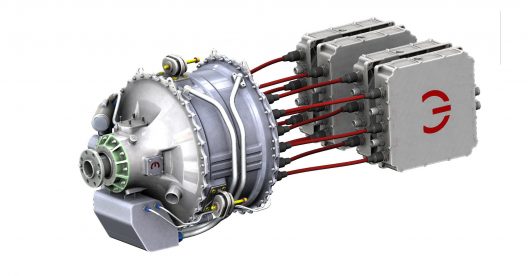 Earlier versions have undergone thousands of hours of ground and flight testing. These latest versions are “optimized for real-world commercial aviation applications to further accelerate the path to certification for electric aircraft and bring the future of electric aviation closer to reality.”  Having flown in Harbour Air’s eBeaver and an eCaravan, the motors have been simplified and “enhanced.”

The magni650 can be seen as two 350s joined to power a common nose cone propeller drive.  The 350EPU, controlled by paired magniDrive-100 inverter/motor controller power electronics units, is doubled in the 650EPU, with four 170 kilowatt magniDrives enabling high redundancy and the ability to maintain partial power despite loss of any unit.  Liquid cooled the direct-drive EPUs can manage 30,000 feet in unpressurized environments.  The front cone can accommodate a propeller governor and all standard aircraft accessories.

Other key program partners announced so far include Honeywell Aerospace, which is providing the Alice’s fly-by-wire flight control system, and aerostructures group GKN Aerospace.  On June 3, GKN said that it has delivered the first fully integrated wings, empennage, and electrical wiring interconnection systems for the aircraft from its facility at Bristol in the UK.  Perhaps manufacturing will move to Washington state also, since GKN has a site in Sumner, Washington that produces winglets for Boeing 737 Max’s and parts for F-35s.

Roei Ganzarski, CEO of magniX and Executive Chairman of Eviation, has high hopes for his products.  “Based on real-world design, build and operational testing, we’re making incredible strides to push the aviation industry forward and accelerate the rate at which aircraft become electric.  The magni350 and magni650 EPUs enable affordable, emission-free and quieter flights to communities around the world in the very near future.”

Eviation CEO Omer Bar-Yohay is equally enthusiastic.  “Sharing our production Alice design is a special day for Eviation and our partners. Electric aviation will continue to open up new possibilities for affordable, sustainable regional travel around the world. Alice is poised to turn that possibility into a reality soon.”