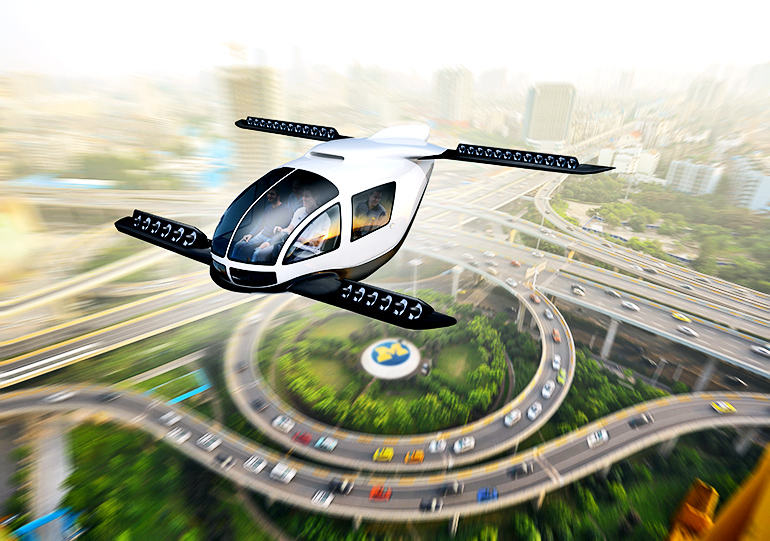 University of Michigan Research Sprinkled with Optimism (or Not)

Can electric Vertical Takeoff and Landing (eVTOL) machines provide the swift crossing of  urban distances at a price that will attract the non-flying public? Can they do so while keeping pollution in check? 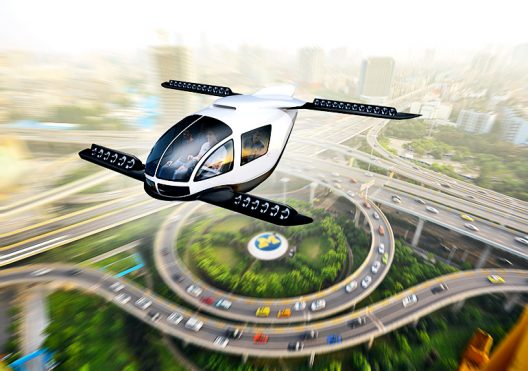 Artistic rendering of an electric vertical takeoff and landing taxi cruising through an urban center. (Credit: Dave Brenner/U. of Michigan School for Environment and Sustainability.)

A University of Michigan study, funded in part by Ford Motors, concluded that taking a short (depending on definition) trip in an autonomous electric vertical takeoff and landing machine might not only be quicker than a ground-bound journey through gridlock, but might even be less expensive.  These two factors are important if we are clean  the toxic atmosphere that hangs over our major cities, at least partly brought about by the constant transit of personal automobiles, public buses, and large trucks.  Another aspect of the study, though, showed that certain trips will be less polluting if taken by conventional automobiles.  This dichotomy comes from the nature of eVTOL flight compared to the distances to be traveled.

Researchers published their findings in the April 9 Nature Communications under the title “Role of flying cars in sustainable mobility.”

The full text is available, and will answer a lot of questions while raising others.  Interestingly, while the paper highlights eVTOL  technology, cited work by David Ullman and Vince Homer features their more conventional but ultra Short Takeoff and Landing (CSTOL) researches.  The paper also uses material from Alex Stoll at Joby, where their S4 falls into the Uber eVTOL guidelines.

VTOL GHG emissions over a range of trip distances. The GHG emission results for a single-occupant VTOL are broken out by the hover and cruise phases over trip distances from 5 to 250 km. The climb phase is modeled as part of cruise. Furthermore, the takeoff and landing hover phases are combined for simplicity and the powerless descent phase is omitted, as it is assumed to have zero emissions. See the Methods section for details 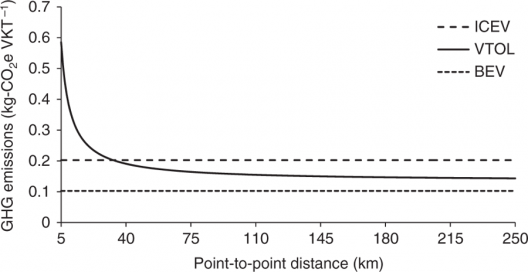 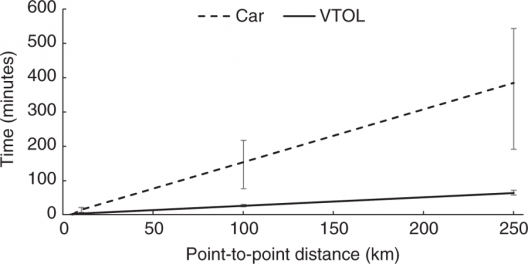 Travel-time comparison. Travel-time results for the VTOL and ground-based vehicles (ICEV and BEV) are provided as a function of travel distance. Uncertainty bars show the impact of varying the assumptions for wind speed for VTOLs and urban-highway driving split for cars

While the UMich-Ford study discusses an Uber-like model of four- and five-passenger Urban Air Mobility (UAM) machines compared to conventional cars, Blackfly makes comparisons between their ultralight machine and more conventionally-sized vehicles.  Of course, even with the need to levitate, Blackfly wins the efficiency and economy prize.  The lesson here might be what Bill Stout (designer of the Ford Trimotor) taught us, “Simplicate and add lightness.”  Particulary surprising its its noise level.  Usually, small propellers turning fast produce high noise levels.  This would be an aspect of Blackfly worth investigating. 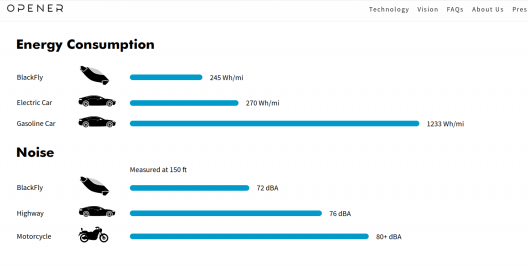 At a higher level, according to its IPO (Initial Public Offering) prospectus filed last week, Uber spent $457 million last year “on research and development of autonomous vehicles, flying cars (known as eVTOLs) and other ‘technology programs’ and will continue to invest heavily in the futuristic tech even though it expects to rely on human drivers for years to come.”  Coming years will see whether their findings and the U of Michigan’s match and come to fruition.

Uber’s S-1 details what investors can expect as the company works with their money.  They’ve spent one-third of their R&D budget on automated systems, but admit they will be working in “hybrid autonomy” for several years until human drivers (and presumably pilots) can be replaced entirely.  This caution may stem from last year’s fatal collision between an Uber Volvo and a local cyclist.

Heavy interest from “flying cars” and autonomy will generate fascination and fear, judging from the headlines for essentially the same reporting of the research paper noted above.  How we get rid of the term “flying cars” and references to the Jetson’s is another matter.

The reality of pollution kills your dream of a flying car
They might make sense for longer trips and taxis, though.  (Engadget.com)

These are all news sources reporting on the same University of Michigan study, remember.